Tactics board: A look at Limerick FC's meetings with Cork City and Shamrock Rovers 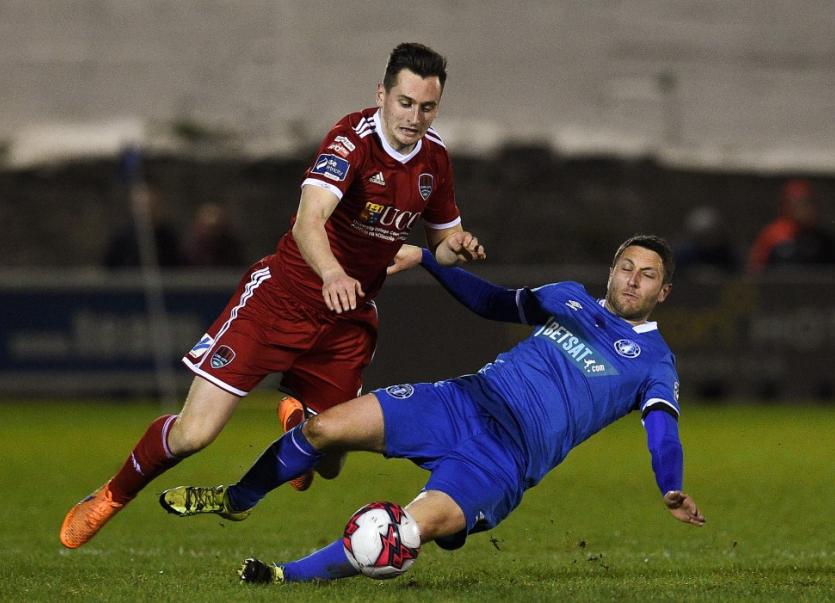 Shane Duggan in action for Limerick FC against Cork City

People say fortune favours the brave and not one local fan could question the bravery of Tommy Barrett’s Limerick FC team during the bank holiday weekend.

Two home games in quick succession against champions Cork City and former player Stephen Bradley's Shamrock Rovers had some people fearing the worst. The team has been labelled somewhat “Jekyll and Hyde” and with good reason, prior to the weekend their form included, two heavy defeats, conceding 13 to Dundalk and Derry, both away from home but showing steel and resolve at home, including a draw with Bohs and a recent win over Bray.

So with two of the biggest clubs in the country coming to town the results were hard to predict. On Friday for the visit of Cork City the North Stand of the Markets Field was rocking with enthusiasm and a real passion for the team. The Blue Army sang songs hailing their heroes and the men in blue didn’t disappoint.

Feeding off the atmosphere created, Limerick rocked the champions on seventeen minutes when Billy Dennehy charged into the Cork half unchallenged and unleashed a rocket like shot past Cork City's Keeper Mark McNulty for a shock lead.

Cork leveled through a penalty on thirty three minutes but didn’t really threaten in the second half and the game ended in a deserved share of the spoils. In truth, it was a performance that felt more like a win for Tommy Barrett’s men.

Monday’s bank holiday fixture was now met with renewed optimism and belief was beginning to show that maybe, just maybe, the team could get something from Rovers and continue what now is a very good start to the season.

However a moment of madness from the man of the match against Cork City, Shaun Kelly, highlighted again the unpredictable nature of the team. The Derry man's challenge gifted Rovers a penalty on seventy five minutes in a game where a draw looked nailed on prior to this.

In football, like life, there is always a positive or two to be had though and Killian Brouder gave us one on Monday. The centre back showed that he is ready for this level while marking the talented Gary Shaw.

Brouder, an academy graduate, delivered a solid performance. The emergence of William Fitzgerald to this stage permanently has come quicker than he’d have imagined but he looks very comfortable in this company and could have a bright future ahead of him.

Karl O’Sullivan and former Aisling Annacotty player Adam Foley both got first team minutes this weekend also highlighting once again the shortage of first team players available, but also that there is a steady stream of local talent coming through the ranks to assure us all that the future of the club is bright and with a brave young manager in charge, it is in safe hands.