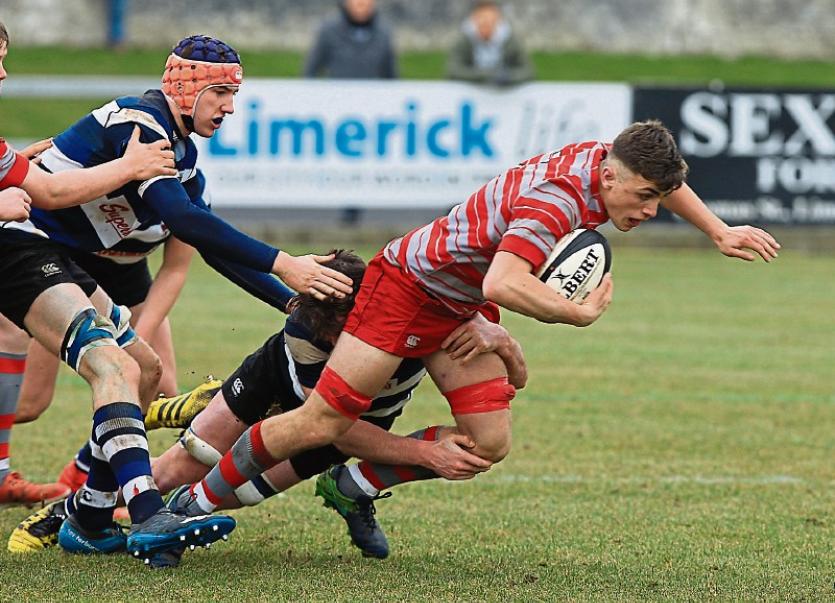 GLENSTAL Abbey will be looking to create history when facing one of the competition heavyweights, CBC, of Cork, in the 109th Clayton Hotels Munster Schools Senior Cup final at Musgrave Park this Sunday, March 18, at 4pm.

Third-time Senior Cup finalists Glenstal Abbey will be looking to win the province's most prestigious schools rugby competition for the first time ever when locking horns with 29-time winners Christians.

Glenstal will be hoping to learn valuable lessons from their 2017 final defeat to another Cork side, PBC, at Thomond Park.

Five members of the starting team from St Patrick’s Day last year lined out in the Murroe side’s impress 30-10 semi-final win at the Markets Field at the start of last week.

Up to seven more starters from the win over Crescent were in the Glenstal extended squad 12 months ago.

Up to six members of the starting line-up in Sunday’s showpiece final are from Limerick, flying winger Ronan Quinn and influential back-rower Mark Fleming, both Adare, as well as centre Caolan Dooley from Newcastle West, scrum-half Andrew Walsh from Murroe, flanker Ronan Leahy, from Ballyneety, and second-row James Fitzgerald, also from Adare.

Prior to their impressive quarter-final win over Crescent College Comprehensive, Glenstal Abbey had defeated Bandon Grammar School in the quarter-final, while overcoming Rockwell College in the opening round.

Glenstal Abbey head coach Sean Skehan said he hoped they would learn from the 2017 final, the Murroe side’s first appearance in the final since 1970.

Sean Skehan said: ”I can’t wait for Sunday, really, really can’t wait. The experience of having been in it last year probably takes away the fear factor, the unknown factor from the points of view of the coaches and players.

“It is about embracing the week as much as we can. Last year, one moment seemed to blur into another, so just trying to enjoy each moment as it comes, get as much prep done as we can and make sure we put in the best performance that we possibly can.

“We would have spoken after the semi-final and felt that we lost the run of ourselves in the lead up to the 2017 final, not knowingly but unbeknownst to ourselves but now on reflection we did.

“Nothing has been achieved at this point, we still have a huge amount of work to do this week, CBC are a quality, quality outfit, but we are hoping that if we can get our side right we will give them a good rattle.

”I didn’t attend the CBC semi-final with PBC last week. I was involved with training at Garryowen. I had a few bodies on the ground and would have gotten the tape of the game. Pretty much my weekend has consisted of watching about six hours of CBC.

”Look, they are a really good side, some really good players, really well coached, so they will be tough to break down. But we are hopeful with the players we have and the systems we have we can be there or there abouts.

”We are travelling to Cork for the final, obviously you would be preferring to play it at home, but Pres had to come up to us last year and they got the job done. It is no excuse.

”There will be two sets of XV players on the pitch next Sunday and we just have to make sure that we are ready. I think we will be, we are in a good place leading into it, no injuries as fit as we could be.

”We gave the lads a couple of days off post the Crescent game. We felt they needed a bit of a break.

”This week we have been putting together a gameplan and things that we think might be able to stress CBC and trying to prep ourselves what they wil try to do to stress us.

”We will try and stay true to our playing style. Our playing style is the way it has been for the past two years. We want to really attack minded team, we like to keep the ball in hand and move it.

“It will be a busy week, but no more so than a regular season week.”

Skehan said: “We have kids coming through the pipeline, a few guys in the Munster Academy now. The Ireland Schools squad is announced this week and we have a sizeable contingent in that.

“The programme within the school is growing all the time and it is our goal as coaches to make sure it doesn’t yo-yo.

”To get to two Senior Cup finals on the bounce is pretty good. There are second year students who think we get to the final every year.”