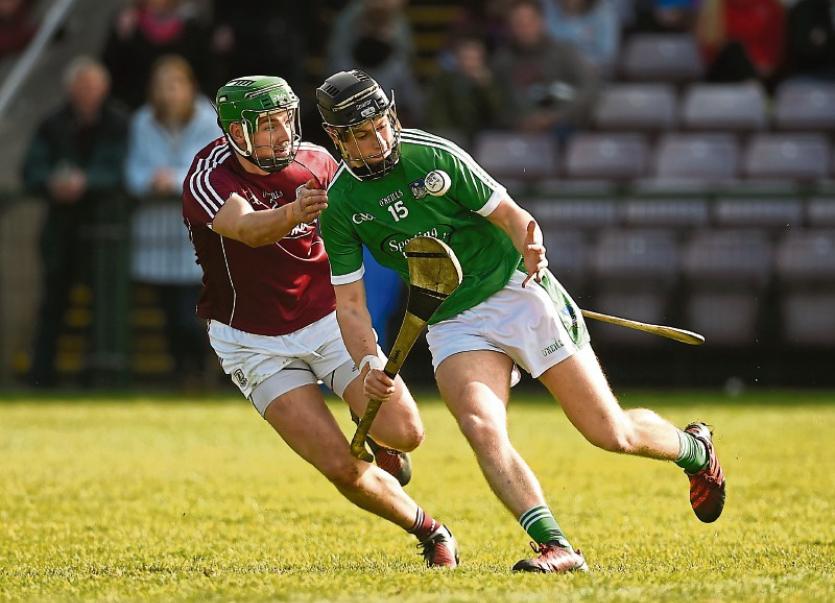 Barry Murphy on the charge for Limerick against Galway

A FEW weeks ago I said Limerick were one game away from arriving and thankfully this team finally took Limerick out of Division 1B and into top flight hurling next season.

The value of this win cannot be underestimated and it might well be the turning point for better days ahead. It has taken eight years for Limerick to return to Division 1A and credit to the players and the management for taking this vital step.

From a management point of view they have done well and I like the fact that they have not got involved in side shows. They have kept their focus and that of the players. For as good as this win was I think the management will fill a few pages of notes particularly from the first half where Limerick were truly awful. They hit some very poor wides and they looked so far off the pace of Galway. They lost shape and they were in trouble all over the pitch.

There is little point in getting carried away because careful analysis would suggest Limerick are far from the finished article.

Winning meant a lot to the players and it was great to see the happiness on the player's faces. They were asked many questions but it took great heart and honesty to recover after a terrible first half. This win will lift all in Limerick hurling. It was badly needed and it’s the kind of win that will give the players great confidence.

The last few years have seen great success at minor and U-21 and now players are coming of age at senior level. This is a young team, a team that will have no fear of whomever they play. They like to be in the winners enclosure and they certainly look to be going in the right direction.

Winning promotion without the services of many players suggest they could be in for an extended run this season. Limerick have been too long away from the top table of hurling and this win will greatly help in players expressing themselves at a higher level. When it comes to the business end of season the experience of playing at the highest level is vital.

Limerick had chances in previous years that weren’t taken for a variety of reasons. This time round they have worked hard, the management had them fit and ready for this battle and that was one of the major differences between the teams at the end last Sunday.

Regardless of who Galway were missing they are the All Ireland champions and any day you travel away and beat the champions is a good day. Not for one minute will I get the slightest bit carried away by this win because I know the challenges facing them in the future. They have a lot of improving to do and I think the formation of the team will also have to be altered as the year goes on.

I am still far from convinced by our half backline and I am still bemused as to why Gearoid Hegarty is not given a chance to express himself at either centre or half back. I saw him play with UL at both centre and on the wing and he was very impressive. Limerick left gaping holes in their defence which Galway made good use of particularly in the opening half and that will have to be of concern to the management. If Limerick get the right players in place across the half backline then they will become a formidable outfit.

The standard of Limerick’s shooting was really poor at times, they seemed to panic on the ball and all too often take the wrong options. They also over played the ball and for long stages they looked in real trouble. The game had a needle to it and when it got really heated it was Limerick that came out the better of it.

Galway will wonder where it all went wrong in the second half. They could manage only four points after blowing Limerick away in the first half. They may well point to players getting tired but deep down they look like a team well back from where they were this time last year. It takes a while for some teams to recover from the lap of honour and time will only tell if Galway have the capacity to return to the sort of form they showed last season.

It took a battling performance from Limerick to win this game. Kyle Hayes played a key part in turning the game. It was a fair sign of the him to produce the performance he delivered with this his first game back after injury. He scored a goal but more than that he brought others into the game. He caused a lot of problems for the Galway defence who were all over the place in the second half.

Sean Flanagan and Barry Murphy played really well also. Flanagan had five points from play and by any standard that is a great days work. He was unable to train in the week leading up to the game but he left a major mark on this contest. He showed well for the ball and with supple hands he flashed over some great points.

I have seen the progress of Barry Murphy since he was a juvenile player. He has developed really well. He is smart on the ball and his vision is excellent. I saw him a few times with UL and he was superb. Those college games have really stood to him and I think he has more to bring to the table.

Others who might think they will drop back into this team will now have to really fight for the jersey. Those in possession are doing really well.

Another player that worked hard was Tom Morrissey, in the last twenty minutes when it mattered he stood up. Cian Lynch fuelled the pump for Limerick from midfield. He caused a lot of problems for Galway in the second half. Lynch likes the space of midfield and has the pace and hands to drive the team from here.

Limerick will face Clare this Sunday in the Gaelic Grounds and home advantage will be mean a lot to them. This will be a different game and Clare will bring a strong challenge. I have seen Clare three times in the league and I was very impressed by them. They have played good direct hurling and their forwards will see fast ball. That will test the Limerick defence and if we do well here then they are in with a cracking chance.

As hurling people we are happy to see Limerick back amongst the hurling elite. Our time away from the top table has been too long. Hurling means so much to us. We yearn to see the green and white flicker on big hurling days. This team are in a good position to make progress for Limerick. It will not be easy, it will not happen overnight but opportunities will come and when they do they must be ready to take them.

Right now hurling people have a pep in their step in Limerick. This win has put hurling back on their minds and I would expect to see a big crowd in the Gaelic Grounds next Sunday.

As mentioned Limerick have gaps to fill and some hard calls to make but with every game they are getting better. It takes a while to get all the parts in place to build a serious team. It was hugely important for the development of Limerick hurling to be back in the higher division. Playing the top teams is what improves players and from Limericks point of view they have a player base that can match many in the country right now.

We have had them before and didn’t always make use of them but I feel we are going in the right direction but I stress bigger challenges lay ahead.