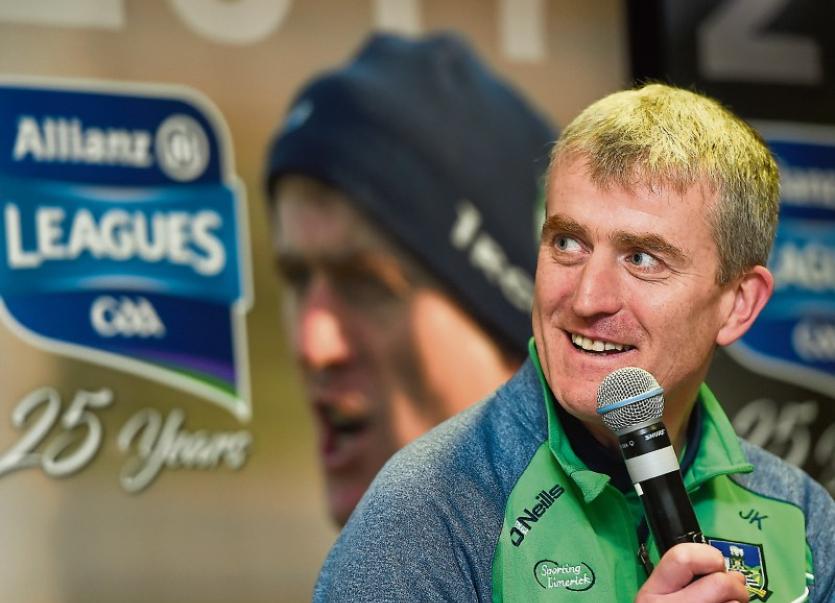 PROMOTION must be a springboard for Limerick hurling, according to manager John Kiely.

“There is way more left in us – more aspects of our game that we have to develop,” insisted Kiely after his side secured Allianz Hurling League promotion with the defeat of All Ireland and League champions Galway.

Next up for Limerick is this Sunday’s visit of Clare to the Gaelic Grounds for the league quarter final.

Limerick won the toss for home advantage ahead of the Bank Holiday weekend Shannonside derby. The game will start at 4.00 and will be live on TG4.

With development work underway in the Mackey Stand ahead of the Munster Championships on May 19/20, portaloos will be in situ for Sunday’s game.

The derby winner will play Tipperary or Dublin in the March 24/25 league semi final.

“We have a lot of work to do and not just this year – over a long period of time. It is on-going but we now know we can depend on the players to give of themselves all the time,” said the manager in praise of his players.

“Another episode in that running debate and sage. A big game and a place in the semi-final at stake so we won’t be dwelling too long on this,” said Kiely after ending Galway’s 15-game unbeaten run.

Sunday will be the first meeting of Limerick and Clare in the knockout stages of the hurling league since the semi final of 2006 in Thurles.

Extra time was needed on that occasion before the men in green edged clear, 3-23 to 2-22. Seamus Hickey is the only surviving member of that panel, which subsequently lost the final to Kilkenny.