FAI Junior and Youth Cups on the line for Limerick sides 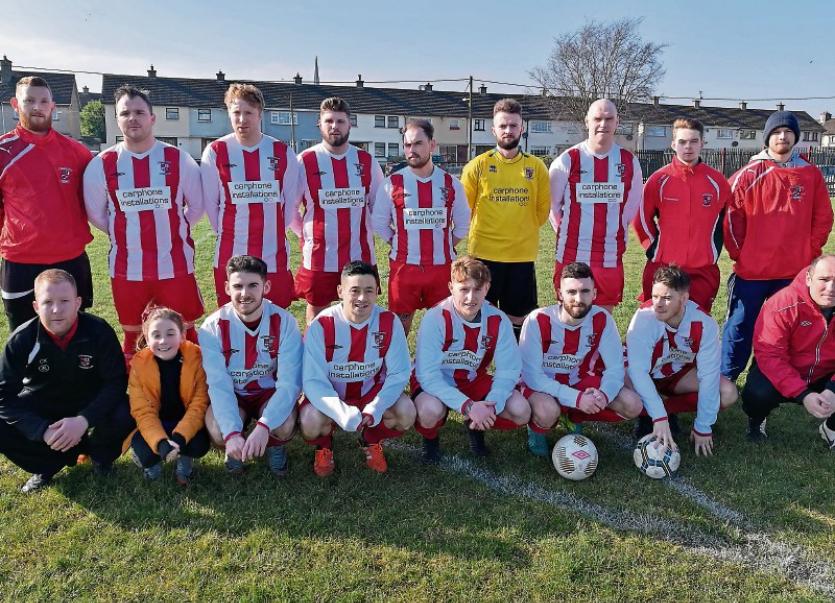 Geraldines A side who till face Fairview this weekend

This weekend brings a mixed bag on the Junior Soccer front when Limerick’s participation in the FAI Junior and Youth Cups is on the wire.

The FAI Junior Cup is down to the last eight and Pike Rovers face the short journey to take on Shannon Town.

The Clare side are 18 points behind leaders Newmarket Celtic but have five games less played. Their only defeat was at the hands of the leaders on a 3-0 score line.

In their last outing Shannon defeated Sporting Ennistymon 2-0, a team Pike Rovers have already played this season winning 7-3 in the Munster Junior Cup.

Pike are on the crest of superb run of 12 consecutive wins averaging four goals per game. The bookies have them favourites for Sunday's tie but the Hoops should be wary enough not to fall into that trap. Goals are being spread evenly across the team which should please the management. Whether Shannon have the guile to hold them out remains to be seen.

There are two Limerick sides remaining in the in the quarter finals of the FAI Youth Cup. On Sunday afternoon Pike Rovers, including newly capped Cian Power, field at the same time as their Junior team are in Shannon as they host Dublin kingpins St Kevin’s Boys.

On Saturday afternoon Kilfrush travel to meet Edenderry and hopes are high in both cases that Limerick could have two sides in the last four.

Janesboro are in Munster Junior Cup action when they take on Peake Villa for a place in the last four.

The Tipperary side lead the way in the North Tipperary Premier League, albeit with six games more played than favourites St Michael's.

'Boro have shown already that on their day they can beat anything in their way. Shane O'Hanlon and Aidan Ryan will have their homework done on the visitors so the starting XI should not encounter too many surprises.

In the Munster Logistics Lawson Cup Division 1A leaders Prospect host Southend while Summerville will be favourites at home to St Pats.

Corbally Utd take on Star Rvs in Athlunkard. Corbally have been in good form of late but will get nothing easy from Rovers.

There are three games on offer in the PJ Matthews Premier League with Carew Park looking to close the gap at the top of the table when they host Aisling Annacotty.

Albert Slattery’s men got something of a reprieve when Munster Council overturned a local call to deduct them points so they will be looking to take full advantage.

Kilmallock take on a Holycross side looking for their first win while Moyross, also in a precarious position welcome Fairview Rgs.