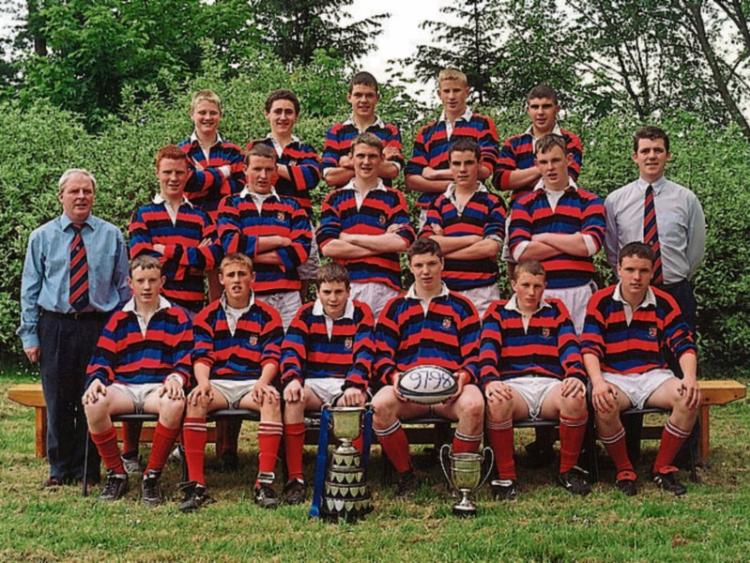 BARRY Murphy says it was the period in his fledgling rugby career when he first realised he could make it in the professional game. St Munchin’s College’s successful Munster Schools Junior Cup campaign of 1998.

St Munchin's will look to bridge that 20 year gap on Wednesday, March 7 at Thomond Park, when locking horns with holders, CBC in this year's final, 2pm.

Barry Murphy had St Munchin’s College in his DNA - SMC to the core.

As he wandered through the corridors of the Corbally rugby nursery as an awe-struck first year, Murphy was taken by the framed photos on the school’s various Schools Cup winning teams on the wall.

Former Munster and Ireland centre Murphy recalled: “The dream was to emulate the achievements of the guys in the Cup winning photographs in the school.

“My older brother was playing Junior Cup in the year I came into the school. The dream was always to follow in his footsteps. You had ex-Munchin’s pupils, the late Anthony Foley and Marcus Horan kicking on with Munster at that time.

“Week one, it was straight down to the back pitches and it’s great the way you work your way up to the bigger pitches, the better pitches as the years pass by.

“Lunch time was spent playing rugby, playing tip in the yard. Rugby was always the best part of school for me.

“My dad (Michael) played with Bohs. We grew up in The Hermitage which is behind St Munchin’s College.

“I would have gone across town to Bohs when I was seven or eight. But we would always have been big Munchin’s fans. My Dad went there too, played rugby there. We went along as kids to the schools matches.”

Murphy may have graduated to play more than 70 games for Munster, scoring stunning tries against Sale Sharks in the 2006 Heineken Cup, and most famously of all against the All-Blacks at Thomond Park in 2008, as well as earning four full Ireland caps. But he reveals that he had a real fight on his hands to make the starting line-up in the 1998 St Munchin’s Junior Cup side.

Murphy said: “I was out of favour really coming close to the start of the Junior Cup in ‘98. I can’t remember why, but there was a fella being picked ahead of me.

“I didn’t think I would make the starting XV for the Cup. I put in a massive effort in a few ‘A’ matches before the Cup began. I played well and thankfully got the nod to start.

“It was a massive deal and with it massive pressure. You are playing in front of big crowds. It was daunting. I wouldn’t have been one of the main guys in the team going into the Cup, but I ended up having a very good Cup run.

“I wouldn’t have seen professional rugby as an option for me probably until then. I realised in that Cup that I may have had something.”

St Munchin’s opened their Cup campaign with a quarter-final tie with Ardscoil Ris at Thomond Park.

“We beat Ardscoil quite well that day,” Murphy said.

“The other centre on the team, Eoin Kennedy was in his first season playing rugby. We convinced him to come out playing. You’d find lads in the school, who were really good at Gaelic football and hurling and you’d try and force them to play rugby!

“Eoin Kennedy was the superstar on the team. He had trials with Nottingham Forest and was playing hurling for Limerick. He carved Ardscoil up that day.

“Our semi-final was a draw against CBC in Cork. They were the dream team for the whole thing and had hammered us a few times during the season.

“Eoin Nihill was our captain. He was phenomenal, a powerhouse, a real good carrier. He led from the front. Garrett Noonan was playing eight and he had a pretty big game too. They missed a kick to win it.

“The replay was on a dirty wet evening in Thomond Park. We just played smart Limerick rugby, up the jumper stuff. We beat them up. Nihill and Kennedy were outstanding, both scored tries, I think. We won comfortably.

“We were very much the underdogs going into the final with Pres. We certainly weren’t cocky, but the extra game stood to us. We were up for it. The buzz in the school was phenomenal.”

But Murphy almost missed out on playing in the final against PBC after being involved in an unfortunate clash of heads with a team mate in the warm-up.

Murphy recalled: “In the warm-up I had a clash of heads with our winger Jamie Collins. The two of us were knocked out. He couldn’t play the game. Padraig O’Doherty started the game. I will never forget it.

“I felt so sorry for Jamie. I didn’t know if I would be able to start myself, but I ended up being grand. It was a tough one for Jamie, but we used it to spur us on. The coaches definitely used it.

“We beat them 7-5 on a dirty, wet day in Cork. Noel ‘Wirey’ Sexton was refereeing the game. He played about 10 minutes added time. We got one try in the first half.

“I made a break, threw a few dummies before his clever inside pass put Eoin Kennedy clear and he ran in under the posts. Brian Carroll kicked the conversion.

“Pres scored a try with a minute to go . They had a kick to level it and the conversion hit the upright. I couldn’t believe it was missed.

“Our supporters were behind the posts. My brother, my neighbours, our friends were going bananas. They were screaming at me. ‘Wirey’ blew it up and I was swallowed up in a sea of young lads. Everyone was singing our names.”

Murphy says it is hard to believe that 20 years have passed since that Cup win, the Corbally side’s last at U-16 level.

Barry Murphy said: “We are having a re-union to mark the 20th anniversary of that 1998 Junior Cup win in April, so it is great that St Munchin’s are in the final next week.

“There is going to be a good crew of us at the final in Thomond Park. I always keep an eye on how St Munchin’s teams are getting on in the Cups. We have a strong family association with the school, a massive love for the school.

”I have friends teaching there and remain good friends with several teachers who were there when I was attending. It is a long time since we won the Junior Cup in 1998.

”I would love to see them do it again. It would be great for everyone. I wish them the best of luck.

“I have made sure to keep next Wednesday free to go to the game. It’s hard to believe it is 20 years since we won it.

”I play some soccer on Monday nights out in Killaloe with a group of lads, including Keith Wood’s son Alexander, who is out-half on the St Munchin’s team.

“He is a serious soccer player too, so hopefully the lads can do the business in the final.”