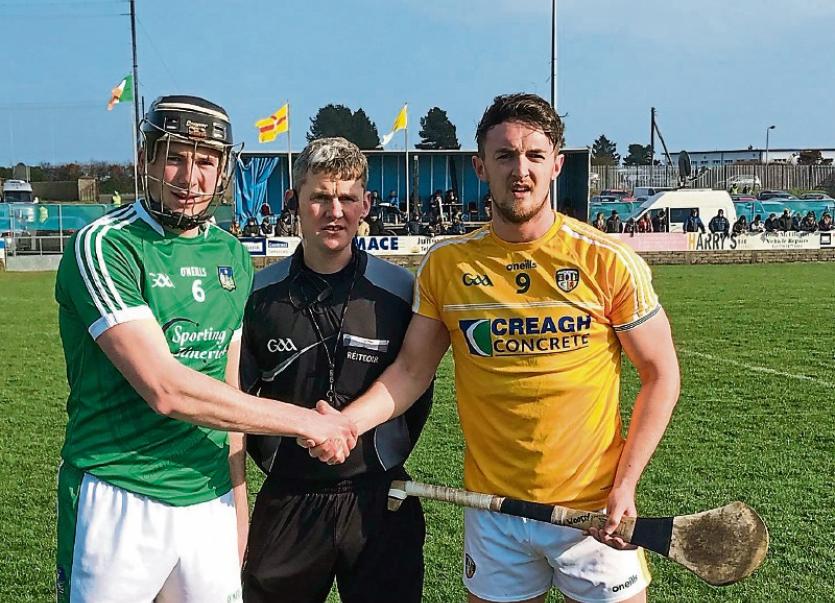 LIMERICK maintained their 100% Allianz Hurling League record with a 3-21 to 0-13 win over Antrim this Sunday.

The round four win in Cushendall sets up a Division 1B winner-takes-all promotion decider with All Ireland champions Galway next Sunday in Salthill. Limerick will go to Pearse Stadium in the knowledge that a win or draw will secure promotion and end eight years in the second tier of the league.

While Limerick were very much understrength due to the absence of the UL Fitzgibbon Cup players and the Na Piarsaigh contingent, this win was straight forward.

Limerick were 1-13 to 0-8 ahead by half time. And, that was after a half in which they hit seven wides and missed at least another two goal opportunities including a penalty.

It was a sluggish opening from Limerick but they finished the half on top with 7 scores in the final 10-minutes.

Limerick were 0-5 to 0-3 ahead after 17-minutes with two frees each for Diarmaid Byrnes and Aaron Gillane. A long range point from Byrnes was the only score from play in that first quarter for the men in green.

Limerick could have build an early foundation but a third minute Aaron Gillane crashed off the crossbar after Seamus Flanagan had been fouled.

Colin Ryan and Barry O’Connell points moved the visitors to the Glens of Antrim 0-7 to 0-4 ahead by the 23rd minute.

Neil McManus frees had the game back to a single point game on 26-minutes, 0-7 to 0-6 but then Limerick came to life.

The run of scores until half time was kick-started by a Oisin O’Reilly goal in the 28th minute – the Kilmallock man doing well to work his way goalwards from the left corner before batting to the net.

Ryan, Graeme Mulcahy, Gillane and O’Connell all added points as Limerick turned the screw in the minutes before half time to ensure a eight point half time lead.

The second half was all one-way traffic.

David Reidy and Neil McManus swapped points and then in the final minute Graeme Mulcahy had the third Limerick goal.