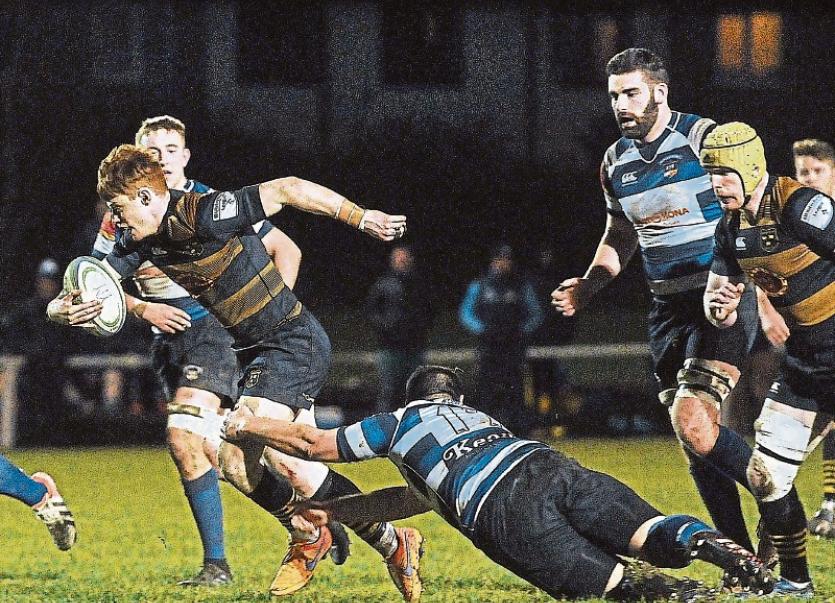 WHEN Limerick teenager Conor Hayes rejoined the Ireland U-20 squad this week ahead of Friday night’s 6 Nations Championship clash with Wales at Donnybrook, he did so with an extra pep in his step.

Hayes, from Rhebogue, who won’t turn 19 until next month, played a starring role in Young Munsters' crucial Ulster Bank League Division 1A win over arch rivals Cork Constitution at Clifford Park on Saturday.

How the Clifford Park faithful loved securing a fourth successive AIL win over Con! Winger Hayes may not have been born when Munsters’ tasted their only AIL success in 1993, but the 18-year-old is well aware of how the club’s die-hard supporters cherish that success.

After the frustration of being sidelined for nine months last season due to a dislocated shoulder, UL law student Hayes has made up for lost time.

Conor Hayes explained: “I was out from January until the end of September last year. I dislocated my shoulder, so I was out for nine months. This season was just a case of me getting back in and actually playing rugby.

“I had no ambitions really of playing AIL and Ireland U-20s. Luckily, I got a run of a few games and Gar (Young Munster head coach Gearoid Prendergast) put a bit of faith in me to keep going. It has kicked on from there.

“After that a few decent performances in the AIL, I got spotted and brought into the Irish U-20s and I have been there since.

"It really is a case of form. Everything is being watched."

Hayes began playing rugby with UL-Bohemian from the age of six. He continued to play club rugby through his teenage years and moved to Young Munster at U-16 level.

Conor Hayes said: "I went to school in Gaelcholáiste Luimnigh in town, so I speak fluent Irish. There was no rugby in there, so I have come through the club system the whole way.

“I played two years with Munster U-18 youths and one year of Ireland U-18s clubs. I have just played Munster U-19s and am in the Sub-Academy with Munster at the minute.”

A talented Gaelic footballer, Hayes played with city side St Patrick’s, captaining the club to win an U-16 premier county title.

“I played a good bit of Gaelic football the whole way up, played minor as well as was involved with Limerick at under-age through U-14s, U-15s until rugby kicked in properly.

"A lot of my back three play has come from those days over in St Pat's.”

Hayes’, who will be 19 on March 15, is eligible for the Ireland U-20s again next year. However, such is his impressive run of form at present that the Limerick teenager was 24th man for the Irish side’s opening 6 Nations clash in France.

Hayes said: "I was over in France with the Irish U-20s as 24th man, to be fair that slow start did really kill us. There was a lot of nerves and it was a new team coming together with some old heads.

"Once everyone settled down and realised we are a good enough team to go after these lads, we really kicked on in the second half. But when you go down 22-3 at half-time in France it is always going to be hard to come back.

“Then against Italy in the last game, you could see how strong we are as a team, how good we are in attack. I think maybe the foot came off the pedal a small bit towards the end of it, but you could see the talent that is there.

“We have a training squad of around 30 players and all of those lads can push into the team at any time, so the talent there is huge.

“It is just a case of performing on the day and keeping it going for the full day.

"We are building towards another massive week against Wales and hopefully do a job there and kick on for the remainder of the 6 Nations and the Junior World Cup in the summer as well.

"I have another year at U-20 level next season. I am only U-19s this season, so this is my first season playing AIL. It has been some experience, the physicality of it, the speed of the game, just everything about it, the analysis, everything steps up. It is a great pathway to build going forward.

"I think we have come on a really good run of form with Munsters’. We started off slowly and we have started to kick on now. Getting wins on a day like today where it is a slog on a wet, heavy pitch, there is no better feeling coming into the dressing room, singing our song after it.”