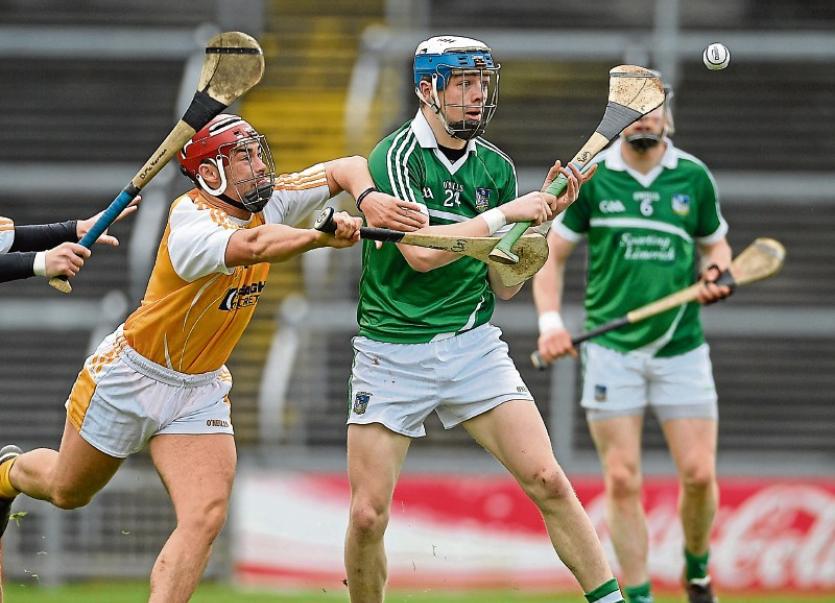 Limerick's David Reidy in action against Antrim in 2014

Limerick will want a fourth successive league win to ensure that a draw or win will be options to ensure promotion when the Shannonsiders go to Pearse Stadium in Salthill on March 4 to play All Ireland and League champions Galway in a winner-takes-all final round decider.

But Sunday (2.00) in Antrim will not be straight forward, with a depleted Limerick panel travelling north. Limerick have a 43-man panel at present but 20 players will be ruled out due to Fitzgibbon Cup commitments with UL, All Ireland club SHC commitments with Na Piarsaigh and injuries.

That leaves Limerick with maximum 23 players, with three goalkeepers.

“Math is all very well but we have a job to do next weekend and my focus is on next Sunday and we will worry about what comes after that, after that,” said John Kiely of promotion from Division 1B.

”There is no point looking beyond or having any permutations on our head - we need to go and get a win in Antrim next week. We move on and we have a very difficult assignment next weekend,” he said.

Limerick have used 25 players in the three rounds of the league.

In Antrim, Graeme Mulcahy could make his first appearance of the season after an injury lay-off. Daragh Fanning and William O’Meara could be set for their first league appearances.

Ahead of the journey to Antrim, Kiely confirmed that he’s planning without his UL Fitzgibbon Cup players.

“UL are playing in the Fitzgibbon Cup on Saturday and we are going to Antrim on Saturday and that gives us a very limited panel to work from but it’s a great challenge for the panel as a whole in terms of being a real character test and a test of the depth we have,” he confirmed.

”We are going to get to see a number of lads that we may not ordinarily got to see - it’s up to them to put their hand up and say I deserve to be included with a place in the team.”

He explained: “We are not going to expect the players to play a Fitzgibbon Cup final and then turn around and drive to Antrim on Saturday evening or Sunday morning. I don’t think it’s on - players deserve more than that. It’s a prestigious competition and they should be entitled to have the weekend to play the final”.

”That’s my position and as a management team we are united in that approach - it does pose a lot of difficulties for us. It brings us back in numbers to quite a tight panel - we have a few injuries as well so we will have to assess it in the course of the week and that could have a bearing or impact on it but our intention is that the UL players will be with UL on Saturday and that will be that,” said Kiely.

”We have to make sure we have enough bodies but I don’t want to have to lay down the law and say ye boys have to travel to Antrim after playing a Fitzgibbon Cup final.”

He added: “We will have 20 players possibly fit to go to Antrim - it could be 18-19 and that’s a challenge. That’s not paying not enough respect to Antrim, I wholeheartedly respect what they have done already in this league campaign has been impressive. For us to go up with a tight panel makes it a really difficult assignment and we will have to pull out all stops to come out of there with a result.”