Munster look to continue excellent record in Cardiff this evening 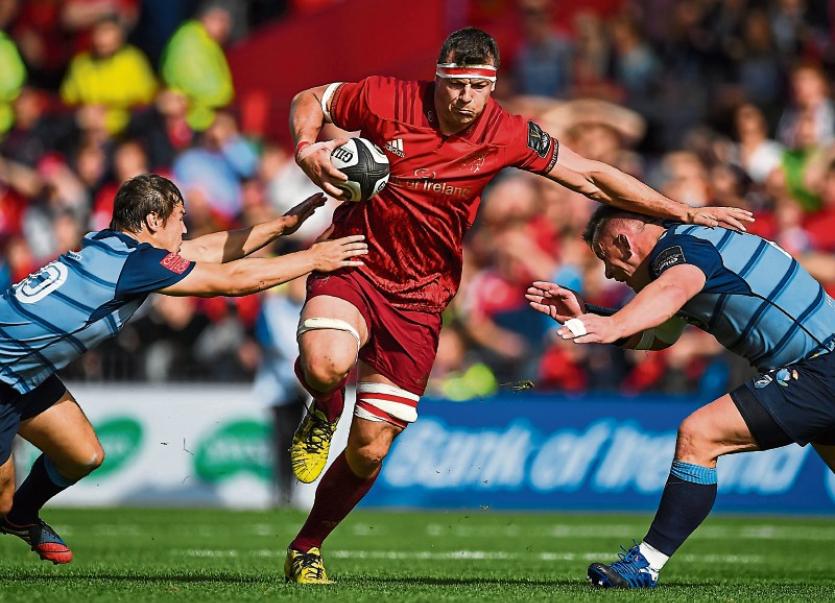 Robin Copeland, a former Cardiff Blue, in action in the first meeting of the two sides this season

MUNSTER will look to make it seven wins from eight visits to the Arms Park when locking horns with the Cardiff Blues in a crucial Guinness Pro 14 fixture this Saturday evening.

Munster currently sit in second place in Conference A of the new-look Pro14, 12 points behind pace-setters Glasgow Warriors and seven points clear of the third-placed Cheetahs.

Wales has proved a happy hunting ground for Munster in recent times as the Irish province has won on each of their last five away fixtures there.

Munster cemented their second-placed position in Conference A with a hard fought 33-5 bonus point win over Zebre at Thomond Park on Saturday night last.

Ireland prop Dave Kilcoyne looks set to get gametime for Munster in Saturday night’s game at the Arms Park.

Kilcoyne picked up a knee injury during Munster's 48-3 victory over Castres Olympique in their Champions Cup tie at Thomond Park last month.

However, the 29-year-old Limerick man has recovered from the injury and is in the running to feature against the Blues in the Welsh capital.

Munster are also set to have out-half Ian Keatley and centre Rory Scannell released from Ireland 6 Nations camp for this weekend’s fixture.

Munster report no fresh injury concerns from their bonus point win over Zebre.

Dan Goggin and Dave O’Callaghan both made their PRO14 returns after long-term injuries in the game and came through the fixture with no issues.

Saturday’s game is the second of four Munster will play during the 6 Nations Championship period and head coach van Graan says he is happy with how squad members are grasping their opportunity to impress.

Van Graan said: “We've got big dreams for this team for this year and going forward. We said from day one this is a squad effort and in order for yourself to play in the big games you need to perform in, let's call it, the smaller games.

“So this four weeks is all about improving as a side and about guys deserving their opportunities.

“We'll make quite a few changes again for this weekend, use our squad and we've got two Friday games coming up after this one, which will be a short turnaround.”