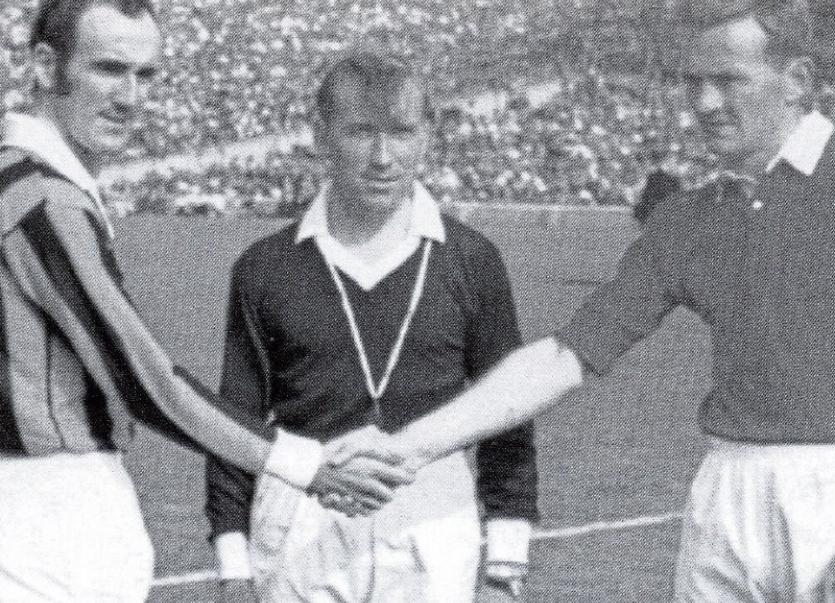 RIP: Referee Sean O'Connor with captains Eddie Keher of Kilkenny and Cork's Denis Muprhy ahead of the 1969 All Ireland SHC final

He was an outstanding servant of the GAA and made a huge contribution at so many levels. Sean will be best remembered for his contribution to his club Claughaun where he gave dedicated years both as a player and official.

He was in many ways the face of club. He was known throughout the county but also throughout the country. He was blessed with great skill and speed and during his playing days collected a very impressive collection of medals both in hurling and football.

It’s safe to say that Sean O’Connor didn’t have too many enemies. He was a pleasant man that always expressed a welcome to those visiting Claughaun. He was well respected amongst GAA people in Limerick but also on the national stage where he became a top class referee.

From the time Sean O’Connor handled his first game between St Patricks and Treaty Sarsfield in 1952 to his last, thirty years later, he won the respect of players at club and county level.

The GAA meant a great deal to Sean O’Connor and he was so proud to be part of the association. Handling big games at Munster and national level were important to him but deep down his club Claughaun was closest to his heart.

For the last few years due to illness Sean was away from the stage that he loved. He had simple pleasures in life and most of them revolved around GAA and greyhound racing. Of course his family held pride of place but Sean fostered the love of gaelic games in them and they knew of its importance both locally and nationally.

I first met Sean O’Connor in 1978. I was part of U-12 hurling team from Caherline that had just lost a replay to Claughaun. We had a good team but lost out narrowly to a better team that included Leo O’Connor. When the game was over we were upset at losing but as I was leaving the field in Bruff a man came towards me, he put his hand on my shoulder and said, “Head up now young man, go back hurling tomorrow.” That was Sean O’Connor. Happy to see his own team winning but still mindful of others.

He also served as a Limerick selector on the All Ireland Minor winning side of 1984.

During his time as a referee he officiated from local to national level. He took charge of his first senior All Ireland final in 1969 Cork v Kilkenny and his second in 1975 when Galway played Kilkenny. He was proud to referee the 1973 All Ireland minor final in what turned out to be a very special occasion for Limerick as they beat Kilkenny in the senior final.

At his peak Sean O’Connor was in demand around the country. He took charge of many county finals and in total charge of twenty two Munster finals at various levels. He did finals at all grades in Limerick but not a senior final. Hard to believe that. A referee of such note was over looked by his own County Board while all others were happy to have his services.

“Sean had all of the qualities required to perform at the highest level. He won the respect of players and officials at all levels and that says a great deal about the man.”

The GAA fraternity turned out in big numbers from Limerick and around the country. Many of those that had played and served with him in Claughaun were there and his life long friend Declan Moylan had soldiered both as player and official with Sean O’Connor.

Moylan said, “We are friends for more than sixty years. He was a proud Claughaun man and gave outstanding service to the club at so many levels”.

Both Moylan and O’Connor won championship medals in 1957. They were beside each other for the team picture. The game still has many memories for Declan Moylan,

“Sean was appointed captain after Dermot Kelly was struck down with the flu. It didn’t look good for us because Ralph Prendergast went to America two weeks before the game. We were playing the mighty Treaty Sarsfields and few gave us a chance. It was a special win and one that put a great foundation in place for Claughaun. Sean loved hurling, he loved Claughaun and I will miss him greatly.”

Claughaun produced some outstanding players that served club and county with great distinction. Sean O’ Connor was one of them. When I think of Claughaun I think of players like Mick Tynan, Eammon Cregan, Mick Graham, Danny Fitzgerald and many others. Sean O’ Connor was proud of them and all that wore the club jersey. To his family and many friends I offer my sincere sympathy.

It was with great sadness I learnt of the untimely death of Tony Houlihan last week. I had only met him a few times but he was a gentleman. At just 42 Tony was called from life way too soon. His passing shocked the entire community of Adare and beyond. They queued for more than five hours to pay their respects. The passing of one so young is always hard to accept and his loss will be greatly felt by his family. Tony played for Adare, he enjoyed some great days with them and also played minor hurling with Limerick. To his wife Audrey, his daughter Neasa, his family and friends I offer my sincere sympathy.

In time the history books will record Na Piarsaigh’s win over Slaughtneil last weekend as possibly the greatest win in the history of the club.

This was a test of character and they had to dig deep to pull this one from the fire. It was a testing game in many respects and I don’t think the Na Piarsaigh players got the sort of protection they deserved from the referee.

Na Piarsaigh will admit they were sluggish for long stages and in fairness to Slaughtneil they did test their defence. Other teams would not have left Parnell Park with a win and it shows the maturity that now is part and parcel of Na Piarsaigh’s play.

The long lay off didn’t serve them well and it took them longer than expected to come to terms with Slaughtneil. Michael Casey was superb at full back, Ronan Lynch kept them in the game and over all this player is growing in confidence with every game. The goals by Downes and Dowling ended the contest. Winning this game with thirteen men took courage, cool heads and most of all skill.

They will play Cuala in the final. This will be the final of finals as these clubs have dominated the club space over the past few years. I saw Cuala and while impressive I still think Na Piarsaigh will have the better of them in the final on St Patricks day.

Cuala have a lot of pace. Con O’Callaghan caused Liam Mellows lots of trouble but he will not get the space he enjoyed against Na Piarsaigh. The club championship is too drawn out and Na Piarsaigh will now have a six week wait for the final.

Manager Shane O’Neill will be very proud of his charges. He will know that a number of lads didn’t get into the game last weekend but Croke Park will bring out the best in them. It was a superb win and one that will be remembered for decades to come.

For more of Martin's columns, see