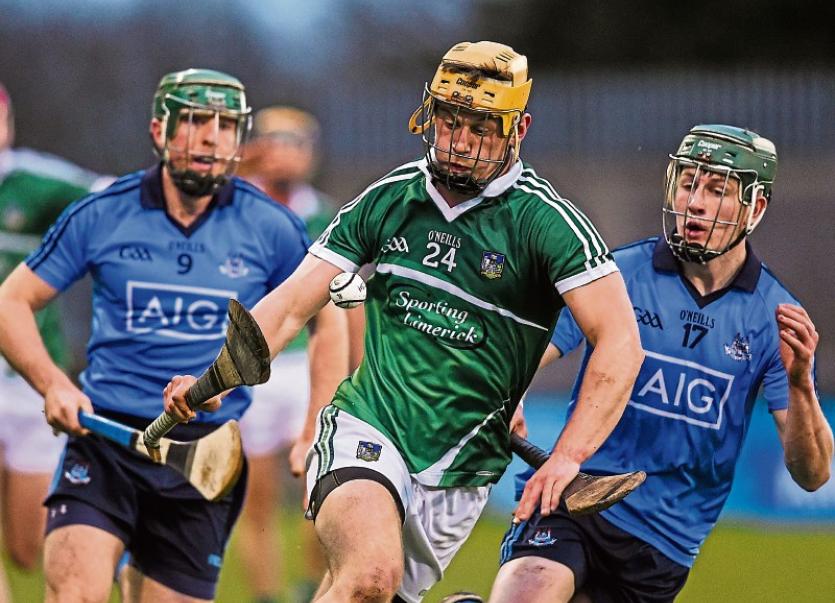 Tom Morrissey during the 2016 league quarter final win over Dublin

THE Dublin hurlers come to the Gaelic Grounds on Saturday (7.00) for their first Allianz League game with Limerick since 2009.

John Kiely's men in green are bidding to continue their unbeaten run, which could confirm the final round game on March 3, against Galway in Salthill, as a winner-takes-all promotion decider in Division 1B.

While Limerick have beaten Laois and Offaly to-date, Dublin under new manager Pat Gilroy lost to Offaly and then struggled past Antrim.

However, Limerick manager John Kiely suggests those results can be dismissed.

”They will bring a tough test”, he warned.

”They made a lot of changes after the Offaly game and brought in a lot of experienced players and have lads coming back from injury. I wouldn’t be looking too much at those first two games – Dublin always seem to put up a strong challenge to Limerick,” outlined Kiely.

The only game in the group stages of the league this decade was won by Limerick in 2013. Outside of that, Dublin won a Division Two league final meeting in ‘13 and the 2015 league quarter final before Limerick got back on top at the same stage a year later.

That 2016 quarter final win in Parnell Park was the last game between the sides – Nickie Quaid, Richie English, Diarmaid Byrnes, Paul Browne and Tom Morrissey could very well be the only players that remain in the Limerick line-up from that 1-21 to 1-19 win.

The last league meeting of Limerick and Dublin in 2009, saw Limerick edge to a 1-11 to 0-12 win. Tom Condon, Seamus Hickey, Paul Browne, Graeme Mulcahy and Richie McCarthy all played in that game under Justin McCarthy and will be in the panel for Saturday.

While that experienced five will be available for selection Darragh O’Donovan could be set to miss the remainder of the Allianz League after suffering a broken finger.

Limerick are also sweating on the fitness of ace free-taker Aaron Gillane ahead of the visit of Dublin.

The injury up-date is better on Declan Hannon, Graeme Mulcahy and William O’Meara who will be in contention for their first league action of the season after missing the wins over Laois and Offaly through injury.

All three played some part in an in-house training match on Saturday.

“Unfortunately Darragh will be ruled out for a number of weeks. It’s really disappointing for him because he was showing great form and working really hard,” confirmed Limerick manager John Kiely of the O’Donovan broken finger.

”Aaron rolled his ankle in the Offaly game and is still rehabbing – he is 50/50,” he said of Gillane, who missed Mary Immaculate College’s Fitzgibbon Cup quarter final defeat last week due to the injury.

Limerick have started the same team in both Division 1B league games to-date but with O’Donovan definitely ruled out John Kiely and his backroom team will be forced into at least one change for the visit of Dublin.

Limerick are facing into three successive weekends of games to conclude their Division 1B campaign. After Saturday’s tie with Dublin under the floodlights of the Gaelic Grounds, Limerick are away to Antrim and Galway – the final round March 3 game in Salthill a likely promotion decider with the All Ireland champions.

Then there will be a league quarter final tie on March 10 against one of the top four sides in Division 1A.

Ahead of Saturday game, which is live on eir Sport, the Limerick management will monitor players in Fitzgibbon Cup action this week.

”The Fitzgibbon Cup is down to it’s concluding stages so numbers for inter-county training are increasing and it’s easier with more bodies. It means guys are looking over their shoulders and everything is more competitive,” said Kiely.

”It’s in the melting pot but we will continue to take it game by game,” he said of Division 1B, where Limerick and Galway are unbeaten.