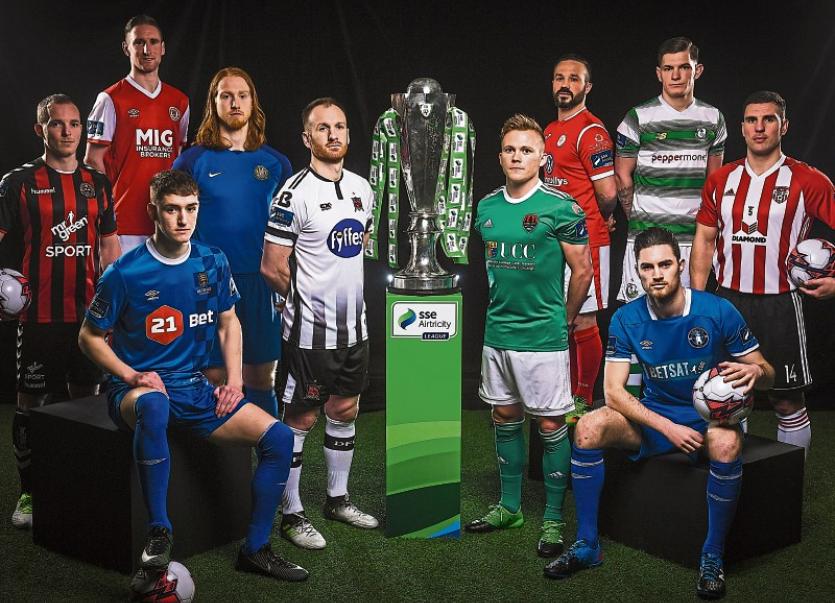 Representatives from the 10 League of Ireland sides at yesterday's launch

Speaking at the launch of the new season at the Aviva Stadium on Tuesday afternoon, the former Cardiff City midfielder believes nobody should be focused on anything other than the games in front of them.

“I suppose at the start of the season, it’s a very negative thing to be talking about,” he said.

“We don’t want to be in the bottom three, because then we’d be in a relegation battle. I know it’s a cliché, but you really have to take one game at a time and the focus is on Sligo Rovers this Saturday night. It’s a good benchmark for us to open the season.”

Boland, a caretaker manager last season between the reigns of Martin Russell and Neil McDonald, will take up the role of Tommy Barrett’s number two – a manager he believes will be a great success.

“I think he’ll cope really well. He’s been working with young players now for a while. He probably knows more about Irish players than Neil McDonald did, too – with Tommy having been the U-19 manager for the last few seasons.

“I’m sure it’ll take time to gel. The boys have settled in well. They are new players. First and foremost, they have to get used to each other. There’s a real mixture of youth and experience and that’s positive.”

The 42-year-old was also quick to point out that Limerick FC have options, and the notion that they’ll be forced to dip into youth reserves isn’t the case. He explained:

“We’ve got options. We have Mark O'Sullivan, Connor Ellis and Danny Morrissey as strikers and they’re all different players. Based on performances so far, and I know the opposition is a level below, but they’re looking sharper with each game.

“It’s not just about pride in young players, because they’re coming through the system – it’s exciting because they look good enough to make that step up. If they’re not up to standard, they’ll be found out – and we don’t want to do that to young players.”

Limerick have almost a clean bill of health for the opening clash with the Bit O’ Red, with only Connor Ellis battling a slight groin problem.

The game against Sligo Rovers, which kicks of at 7.45pm on Saturday, will see Limerick wear their new look home jersey. The Umbro kit was launched this week, with fans able to purchase same on the club's website.