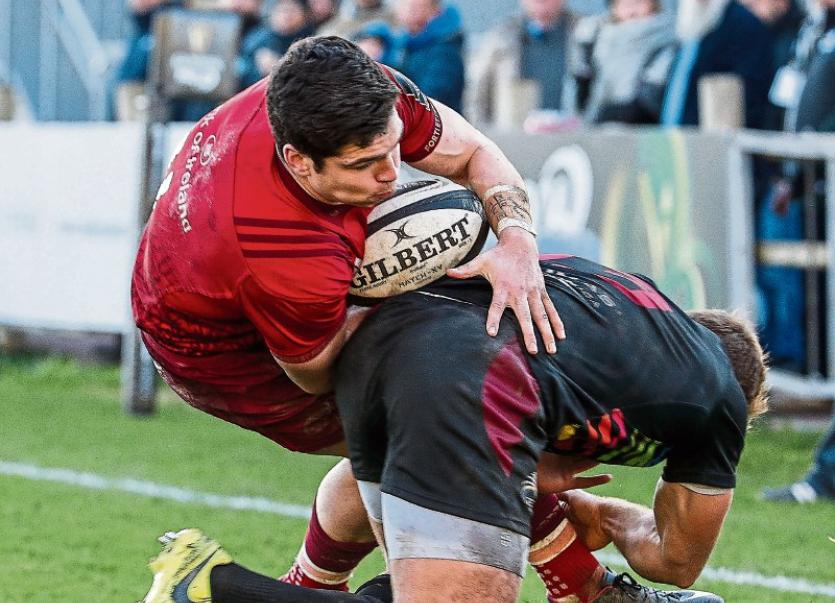 Alex Wootton in action against Zebre earlier this season

MUNSTER will aim to stretch their winning sequence against Zebre to 12 games this Saturday night as the Italian side visits Thomond Park for the re-start of the Guinness Pro14.

Saturday’s fixture is the first of four games Munster will play minus their Irish internationals during the 6 Nations Championship period.

Munster currently sit in second place in Conference A of the Guinness Pro14, a full 15 points behind pacesetters Glasgow Warriors and just three points ahead of the third-placed Cheetahs.

Munster have lost five of their 13 Pro14 fixtures this season.

Munster and Zebre have met on 11 occasions previously in the league, with the Irish province emerging victorious on each occasion.

Indeed, Munster have not lost to Italian opposition since they visited Treviso in September 2013.

While Munster supporters will be expecting Saturday night’s game to yield a try bonus point for the home side, head coach Van Graan insists the side is taking nothing for granted.

Van Graan said: "I don't expect anything. Like, I said from day one, you start at zero, you respect each team. Rugby is a very funny game.

"You should focus on yourself, so we prepare the same for Zebre as we do for any team. It is a game for 80 minutes, a different ball, a different referee, so obviously we want to make some improvements in our game.

"We can only control the things that we can. We have to look after ourselves. Hopefully we will get the win first. If there is a bonus point up for grabs we will take that any day of the week.

"Listen, I have learned that rugby keeps you humble, you respect every single guy you play against."

With Munster’s internationals involved in 6 Nations action, the Pro14 games during this time give squad members a chance to boost their claims for selection for  upcoming, key fixtures.

“There is a real excitement in the squad.

"We have done our planning, we are going to give a lot of guys opportunities in the next four weeks. Like I said, the winning is very important over the next four weeks, but we also need to grow as a squad, put pressure on the number ones for the quarter-final coming up.

"The Scarlets will also be a big game, Glasgow is coming up, Edinburgh have been fantastic at home, Cardiff away is always tricky, so a lot of big games coming up.”