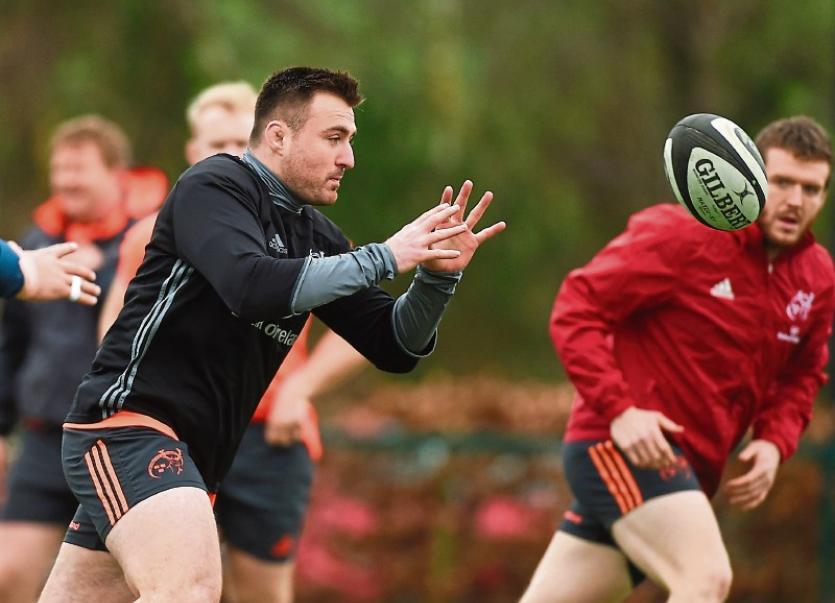 HOOKER Niall Scannell says the bitter feeling of not having had much gametime in recent marquee fixtures in both the Champions Cup and Guinness Pro14 will drive several Munster players on at Thomond Park on Saturday.

Munster resume their Guinness Pro14 campaign against Italian side Zebre at 7.35pm. This is the first of four Pro14 fixtures the province will play over the course of the NatWest 6 Nations Championship period.

Hooker Niall Scannell insists Ireland’s big NatWest 6 Nations Championship fixture with Italy, which takes place in Dublin a few short hours before Munster’s game with the Italians,  will not be a distraction for the province’s players.

“We’ll shut out the Irish game. It won’t be a factor for me. Lads won’t be getting distracted. It’s a huge game for loads of us.

“There are probably a few guys a little bitter that they haven’t played much lately.”

Scannell is hoping for an injury-free run after going through a disrupted couple of months.

“The first injury was my thumb away against Castres (in October in the Champions Cup).

“It got caught and a prop fell on it and dislocated it and tore a few things.

“I got back then for Leicester and Leinster (in December) and was feeling really good, until I cracked a rib against Ulster.

“It was disappointing timing but they’re small injuries, contact injuries, and you’re racking your brains to know what I could do to avoid them. I’m over them now and feeling good and hopefully I’ll be able stay injury free for a few weeks.”

Scannell’s injuries have cost him any chance of being involved in the Ireland squad for the start of the 6 Nations Championship. However, he appreciates just how quickly a call-up can come about.

“For my first (Ireland) cap, two weeks before it, I thought I was nowhere near it. Then two weeks later, Rory Best is sick, Sean Cronin was injured and I was starting against Italy.

“Those things happen, but I wouldn’t be banking on anything like that. But I do have to prepare myself the best I can and fingers crossed, if you’re on form and playing, you’re in the mix.  Sometimes being available is better than your form.”

While Niall Scannell was watching Ireland’s dramatic NatWest 6 Nations victory over France from home, his younger brother Rory was part of Joe Schmidt’s extended squad in the French capital.

“​He (Rory) was one of the extra men at the week-end and it’s a great experience for him. He’s really enjoying camp and the competitive atmosphere up there.

“He obviously enjoyed the France game as an experience, but I’m sure he’s chomping at the bit to try and get in the team but it’s not an easy team to get in.”

Scannell said the four Pro14 games which take place during the 6 Nations window provided squad players with a big opportunity to impress ahead of the big Champions Cup quarter-final with Toulon.

“ This is a huge opportunity to get game time and to be honest I’m focusing on the game for what it is.

“A lot of people are asking me about the 6 Nations squad but that’s not my focus. I just want to get on the pitch and put my best foot forward for there’s a massive battle going on down here as well for the hooker spot, so any game time I can get is huge at the moment.”