FAI and Healthy Ireland street leagues kick off in Limerick 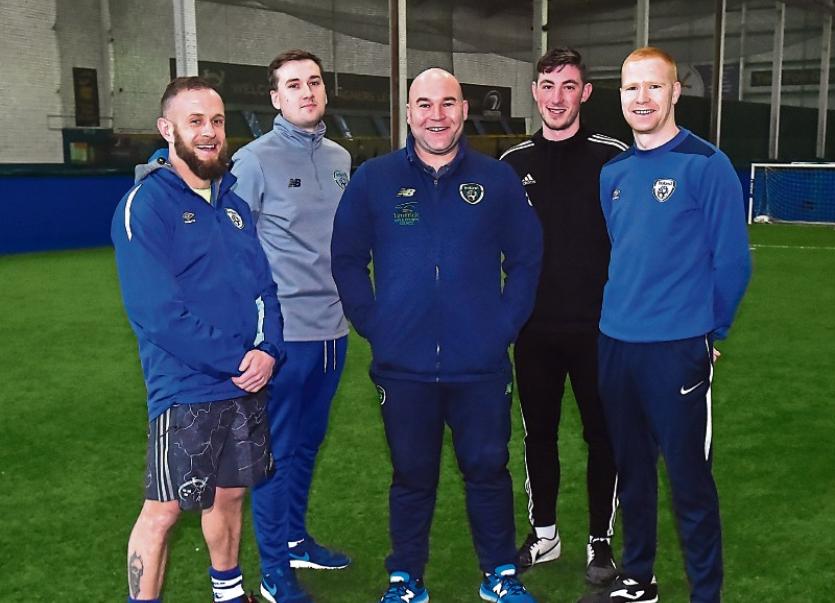 THE Limerick ‘Street league’ a joint initiative between David McPhillips of the Community Substance Misuse Team and FAI Development Officer Jason O’Connor kicked off this week.

The league, this year funded by Healthy Ireland provides two hours a week of five a side games for agencies providing support services across the city. The league runs over six weeks in total.

With over 50 adult males from agencies including Southill Outreach, Cheim Ar Cheim, Palls, St Patricks Hostel and Focus Ireland taking part in competitive and spirited games every week, it is a fantastic way for the participants to become more active and improve their general wellbeing.

The league, now in its fifth year, has produced four international players in recent times. Darragh McNamara, Trevor Hogan, Adrian Power and Jamie Leahy have all worn the green jersey of Ireland as part of Homeless World Cups squads since 2012.

One of those internationals, Adrian Power, along with his colleague in the CSMT, Brian O’Donovan, have done fantastic work behind the scenes in preparation for this year’s event.

“Both Brian and Adrian have been fantastic” added Dave McPhillips Team Leader of the Community Substance Misuse Team in Limerick.

“They have worked tirelessly contacting the agencies, booking the venues and generally putting together the six week schedule which is very demanding and has been done to a very high standard. Both the lads are very committed to the project and this really shines through in their work” McPhillips added.

FAI Development Officer Jason O’Connor sees the annual league at the core of the association's work in Limerick city.

“My work, in conjunction with Limerick City and County council, is to develop the game and it’s participants at every level. Providing weekly football with lads who in the main are not playing junior football. This league could possibly be the start of them progressing into the mainstream game. If nothing else, it provides the opportunity to take a more active approach to their lives.” O'Connor admitted.

As well as six weeks of local games, there is a Munster event scheduled for later in the year leading up to the national finals day which takes place annually in Tallaght.

Alongside the football, funding has been provided to upskill fifteen participants from the league who may have an interest in coaching. The Limerick players can partake in a PDP1 course, which is the first course on the FAI coaching pathway, with those who complete the course, offered the chance to take sessions in local schools and at local clubs.