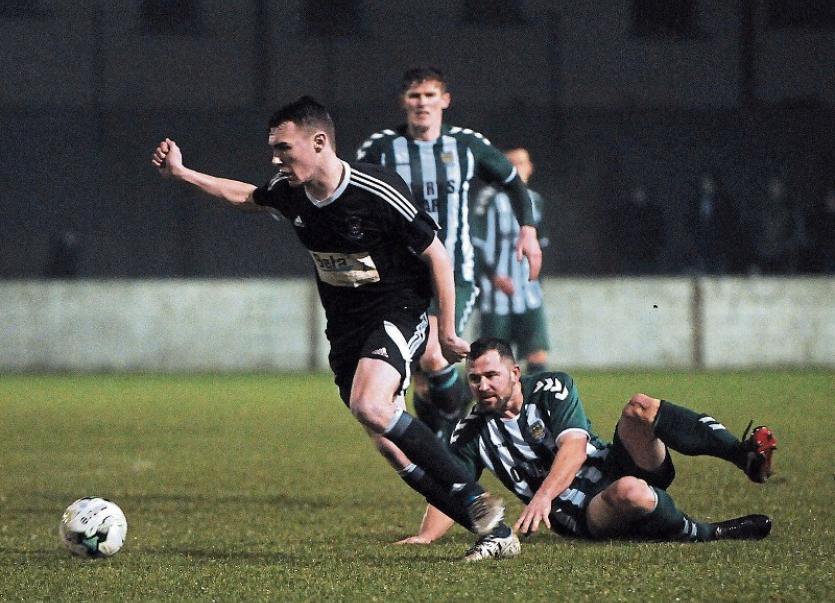 Cup Fever: Keith Mawdsley, Janesboro, in action against Joey Mulcahy, St. Michaels when the sides met in the Champions Cup earlier this season. The two Munster powerhouses are in Munster Junior Cup

On Saturday afternoon, Limerick play their second Inter League game when they visit Galway in the Inter League Youth Cup.

A disappointing 2-2 draw with Clare DL in the opener, allied to Galway's 3-1 win over the Banner County in the first round, means Limerick must beat Galway to advance in the competition.

Cian Power scored twice in the opening tie but a last concession soured the performance.

At the time of writing the panel is still to be finalised but no doubt all will be in readiness come Saturday.

Following Pike's success in the FAI Junior Cup last weekend they are on the road again this Sunday when they travel to Sporting Ennistymon looking for a spot in the last eight as they bid to retain the Munster Junior Cup.

While little is known about the opposition, Ennistymon are in place thanks to a 2-1 win over Rockmount in Round Four.

The hosts are lying mid-table in the Clare League and with home advantage, will be more than eager to pull one over on the Limerick visitors.

However, Pike Rovers have shown they can deal with an away fixture with no fuss, winning nine of their 12 away games to date. I expect more of the same this weekend.

Murroe have a more daunting task as they host St Michaels on Sunday afternoon.

Murroe pulled off a superb result beating Cork Premier side Grattan in the previous round but Sunday's opposition are another step up.

Since they lost 2-1 to Janesboro in the final of the Champions Cup back in December, St Michael’s have played five games scoring 22, conceding zero.

Last weekend the Tipperary side beat Tolka Rvs to advance in the FAI Junior Cup. At the same time, Murroe were going down 3-2 to Hill Celtic in the Lawson Cup.

No doubt the Limerick side will up the ante for the weekend but whether they contain the likes of Jimmy Carr remains to be seen.

Limerick's remaining Munster hopefuls, Janesboro, are favoured with a home draw against Cork side Pearse Celtic.

'Boro will be glad to get back to action after the fiasco of last weekend's abandoned game with Carew Park. We all know the firepower they possess and hopes are high it will be in evidence on Sunday. The Cork side come into the tie following a 5-3 win over Kanturk last weekend and will always give it a good shot but at home Janesboro should prove too strong.

The Premier sides join the fray in the Lawson Cup this Sunday. Ballynanty Rvs will be strong favourites at home to Newport while Moyross will take a welcome break from League action at home to Croom.

Aisling will go into the tie at home to Abbey Rvs and need no reminding of Hyde Rgs in the FAI. Holycross will not get things all their own way t home to Kilfrush. Likewise when Nenagh host Cappamore. Carew Park will be too strong for Glenview Rvs while Charleville with their strike force back should be too strong for Ballylanders.

There are two games listed in the Open Cup. Hyde Rgs B and Weston Villa meet in a local derby while Knockainey take on Cappamore.

Fairview Rgs take on Charleville for a place in the decider versus the winners of next week's second semi final between Carew Park and Hill Celtic.