Junior Rugby Round Up: Richmond have sights set on title 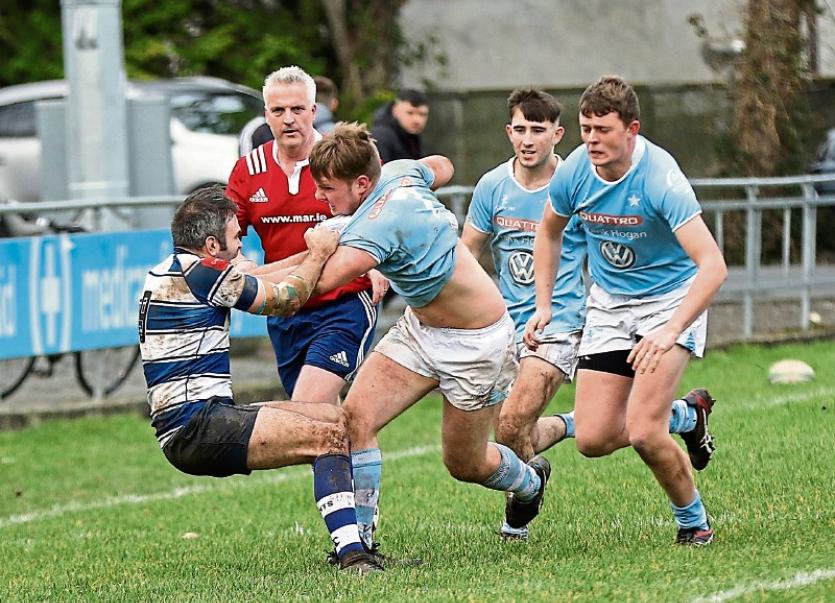 Action from Garryowen versus St Mary's in the Munster Junior Cup

THEY have played one game more than the five behind them, but Richmond will be quite happy with their top of the table place going into this next stage of their MJL1 campaign.

On Sunday, they make the short trip to Jim Slattery Park in Shannon Town, where victory over St Senan’s is their priority. The home side are also in need of points and they will not roll over easily. They are currently fifth from the bottom of the table but clear of an immediate relegation threat.

Richmond have their sights set on this title, their squad has performed well in recent months, but they need to continue their winning run if they are to hold onto their lofty perch.

It is fifth versus seventh in Abbeyfeale when Clonmel visit the West Limerick venue. Since their promotion two seasons ago, Feale have been impressive in division one, more than holding their own, but they will be pushed hard by a Clonmel side that has a top four place in their sights. Meetings between Newcastle West and Kilfeacle always provide good entertainment and the home side will see this as an opportunity to get some consolation for the defeat to their neighbours in the All-Ireland Junior Cup semi-final.

Now under the coaching of All-Ireland League medal winner with Young Munster, Declan Edwards, Newcastle West have been in good form and this derby game should draw a big attendance.

The other game, next Sunday in this division, involving a local club, sees Galbally travel to play Waterpark. With just one league victory so far this season, the county team have struggled. They now need to put another win behind them and build on that lone victory if they are to avoid the drop. Waterpark sit comfortably in mid-table. They are a decent side and difficult to beat on their own turf, so Galbally will have to be at their best to come away with some badly needed points.

In the second division of the Munster Junior League St Mary’s are in third position in the table and they travel to play Waterford City who are six places behind them. On paper the Saints would be expected to get the required victory but they have been unpredictable, particularly away from home, during this campaign.

Last season St Mary’s missed out on promotion by a very narrow margin and games, like this one on Sunday, need to reap reward.

Word from their camp is that they continue to be plagued by injuries so much will depend on the strength of the squad that makes the trip east for this important fixture.

Despite the inclement conditions, almost all of the Bank of Ireland Munster Junior Cup games were played on Sunday with no significant upsets. Through to the next round are Shannon, Richmond, Young Munster, Garryowen and Newcastle West. Here are the details.

Crescent put up a good resistance against their more favoured opponents in this derby game but it was the Parish side that proved strongest over the full 80 minutes. Scorers for Shannon were Marcus McMenamie two tries and one each by Kieran Dunne, Jordan Fitzpatrick, Jerry McCabe and Colm Heffernan. Richie Mullane was accurate from three of the conversion attempts.

The Saints are not going to mark the 50th anniversary of their only junior cup success in 1968 this season but they showed great passion and determination against the light blues. It was 3-3 early in the second half with the St Mary’s pack finding great success at scrum time. Their lineout was not as successful as they lacked a jumper option and that was a crucial feature of this game. Paul Loughran kicked the two penalties for St Mary’s, who turned down another chance of three points with 20 minutes remaining, after making an unsuccessful decision to go for the seven pointer. Garryowen scored a brace of tries within a few minutes of the half time whistle, turning a 3-3 margin to 17-3 in their favour and they added another try in the second period.

The Cork side are going well in division one of the league and they advanced after an exciting game at the Limerick venue. Liam O’Connor scored a first half try for Abbeyfeale with Tom Hassett kicking the conversion as well as two penalties. This was a good performance by Abbeyfeale but they face another big game next week-end when they entertain Clonmel in the league.

The Limerick side had most of the hard work completed at half time in this cup game and led comfortably by 29-0. Richmond’s good form of recent weeks has not gone unnoticed and they advance to a home game in the next round against Waterpark on February 18th.

Tadhg Bennett is back to his best form and he contributed 11 points made up of four conversions and a penalty while the fives tries were credited to Keelan Stephenson, Eoin Hanley, Jeffrey McNamara, Ryan Meagher and long-serving hooker Pat Humphreys.

Dave Foley was in blistering form for Newcastle West and he scored a hat-trick of tries in this big win over UL Bohs. The West led 17-0 at the break thanks to Foley’s first touchdown, a penalty try and a conversion and penalty by Sean Herlihy.

Newcastle kept up the pressure in the second half and while Conor Gilmore got in for a try for UL Bohemian, the home side finished the job with two tries from Dave Foley and a try by Sean Murphy. Sean Herlihy added two conversions with one other conversion kicked by Tommy Kelliher. Newcastle West are in flying form at present and they could yet advance further in this competition.

The Cork side put up decent resistance in this cup clash at the County Cork venue but Young Munster, who reached the final last season, held on for a comfortable win that puts them into the next round.

With the senior side winning in Clontarf the previous day, it was a good week-end for Young Munster with this victory. Their scorers were, tries by Mark O’Mara, Luke Fitzgerald and Joe O’Connor with Adam Guerin kicking two penalties and a conversion.

The Galbally v Killarney game did not take place.

Kick off 2.30pm unless otherwise stated.