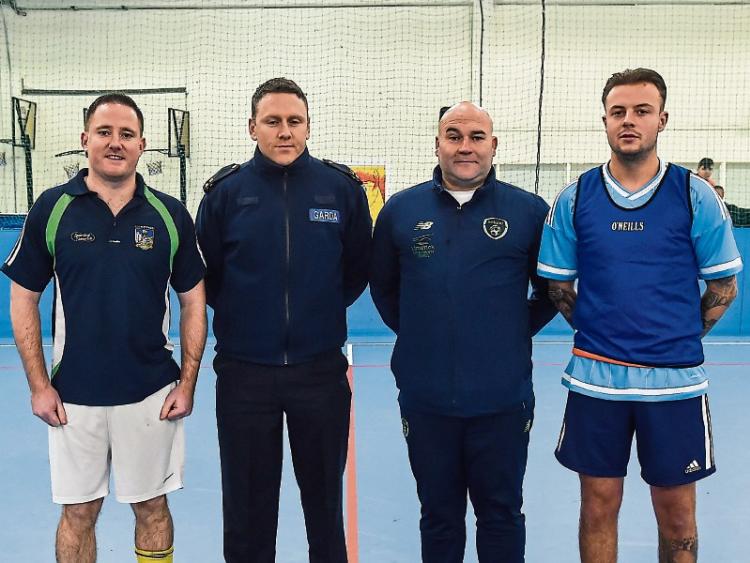 With Limerick junior Football almost completely wiped out by weather since the turn of the year, Monday nights in the Factory Youthspace in Southill have been getting busier and busier.

FAI Development Officer Jason O’Connor, in conjunction with Sergeant Adrian Whelan and Gardaí Keith McCarthy and Adrian Healy, from Roxboro Garda station, have been running a ‘Late Night Futsal League’ for adults from the Southside of the city.

During this spell of very poor weather, Futsal has grown in popularity throughout the country and Limerick is no different with 51 players in total taking part in this very successful event.

Some Limerick based junior footballers haven’t played an eleven a side game, on a grass pitch, since October last year.

Therefore, when the opportunity to play Futsal was provided by the FAI, with the help of Roxboro Garda station, it certainly was welcomed with open arms.

“Building relations with locals from across the Southside of the city is a high priority for the Gardai in Roxboro outlined Garda McCarthy.

“Through sport, one can build relations, break down possible barriers and build a trust between communities and the Gardaí. We have a very good working relationship with the FAI in Limerick and see the ‘on the ground’ differences that engagement through their football programmes has with local adults and teenagers” McCarthy continued.

The Futsal league proved very competitive and was played off in a structure that allowed the players, games and opportunities to win, up to and including the last night, which was Monday January 29.

“We (the FAI) run late night leagues in communities across the country and see it as a fantastic way to engage people in the game confirmed Jason O’Connor a development officer with the national football body.

“Futsal is ideal during winter time, as it is best played indoors is open to everyone regardless of being a member of a club or not. Having the Gardai to referee the games certainly helped everyone involved and provided all with the opportunity to interact positively in a sporting setting” continued the former Limerick FC striker.

For more on the work of the FAI in Limerick, see next week's Limerick Leader. Newspaper.