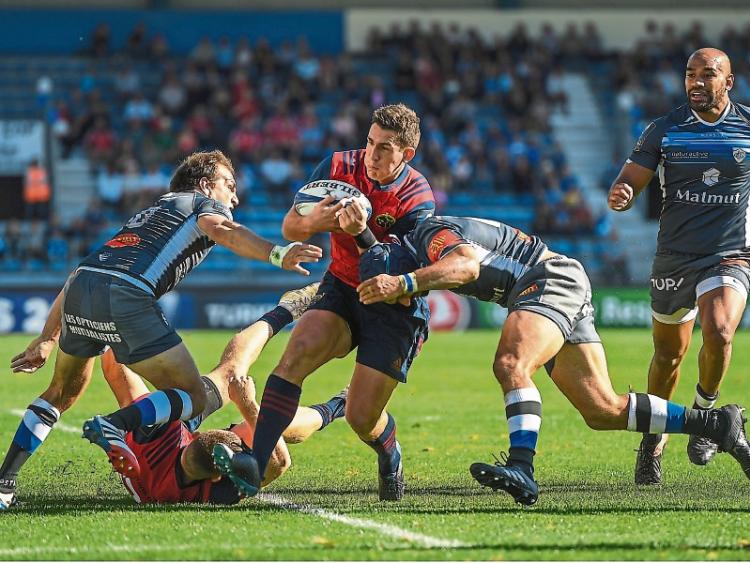 MUNSTER host Castres on Sunday at 1pm in the knowledge that a win would secure them a quarter final berth in this season's Champions Cup.

Munster are currently fifth in the rankings, with a slight chance of securing a home quarter final slot coming their way.

With six games down for decision on Saturday, Munster fans will be glued to their televisions waiting to see who Munster will get in the last eight.

One man who will not be watching rugby on Saturday is Munster coach Johann van Graan.

'I’m going to watch nothing else, just focus on our game. It’s pretty important that we get a win on Sunday. We are in control of our own destiny. We need a win, we need to play well. It will be a high pressure environment two teams that can still qualify. We need to play well, prepare well and have a good 80 minutes. Not focus on the win too much, focus on the process throughout the week' admitted the former South African forwards coach.

One man relishing the ‘opportunity to’win and you are’ nature of this weekend's game is Irish scrum half Conor Murray.

'If you are bogged down by this kind of game or atmosphere coming up, then it is not for you. I think a load of lads in the squad are going to relish this week. It is a home European game at Thomond Park. Hopefully, it will be close to a sell out. We know our fans are going to show up for us. It’s in our own hands. That is the carrot there for us. They are the games you want to play in. We probably never do it the easy way, but it is a massive week, it is a European week in Limerick and everyone loves these weeks. I love the buzz around it, I love training in these weeks. I love the hype and the build up. However many other lads there are, we are all in the same mindset. It is a good week to be around’ commented the Lions number nine.

Another man looking forward to the knockout style game is Peter O'Mahony, the Munster captain. The Cork native is wary of what Castres might bring to the game, seeing as many fans see the game as a guaranteed five pointer.

‘We experienced them a couple of months ago in France. Their set-piece is quality. They have a quality lineout and maul, their scrum is massive to their game. They are obviously a team that momentum is a huge factor to the game and it is something that is difficult to stop when they get it. The lads will do a lot of video analysis and we know how difficult it is going to be. We are a smaller side and we struggling sometimes with momentum stopping. It’s something that we are going to have to address and really put our heads down for this weekend’ admitted the Lions back row.

Castres' chances of providing a shock might be looked upon by the home fans as unlikely, but Munster's head coach was full of praise for his opponents this weekend.

‘All over the park. You just need to look where they are in the French Top 14, how they played against Leicester the previous game against Munster, big forwards, very good kicking game, left-footed fly-half. They don't have a long kicking game, they put you under pressure with a good chase, a very good maul, you need to stop their maul. Defensively you just had to look at the Leicester game, they had a very good game you just need to look at the way they defended, that's top quality side that we are playing against’

Ahead of this weekend's game, Munster are at full strength. Indeed their Champions Cup squad was given a boost this week with the addition of Garryowen duo Mike Sherry and Conor Oliver.

Sherry, who returned to action for Munster against Connacht a few weeks ago, will put pressure on Kevin O'Byrne for the replacement hooker berth behind starter Rhys Marshall, while the addition of Oliver will peak the interest of starting number seven Chris Cloete and replacement backrow Jack O'Donoghue.

Munster's team for the game will be announced on Friday before 12noon, with little change expected to the starting XV which narrowly lost out to Racing 92 last weekend.

The only injury worry is with Peter O'Mahony who rolled his ankle during the clash with the French, however with rehab going well in the early part of this week, the former Cork Con player should be fit to lead his side out on Sunday afternoon at 1pm.

The game, which still has tickets available, is live on Sky Sports.

Still in the mix

Toulon play the Scarlets this weekend, which will decide the winner of their pool.