Jason O'Connor: Limerick need more than a manager to survive in 2018 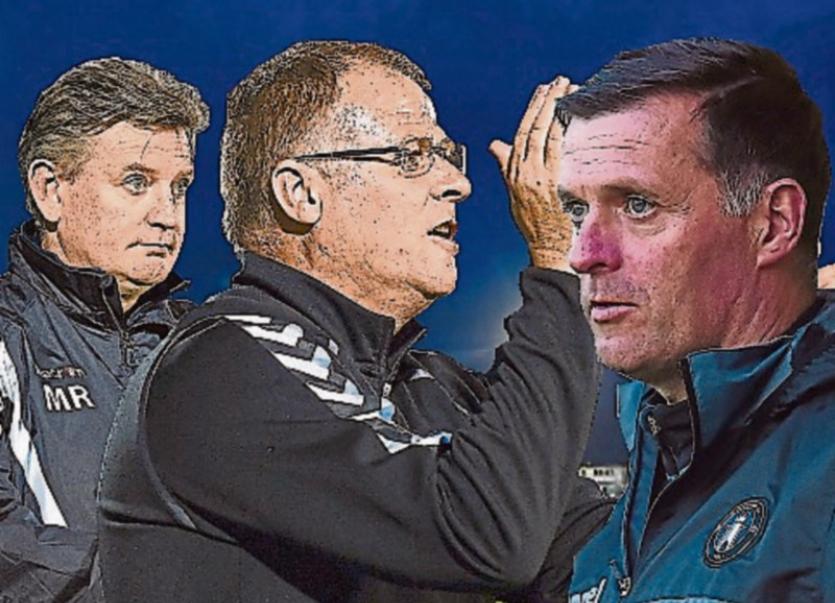 Manager merry go round: Martin Russell, Neil McDonald and Willie Boland (interim) who have all managed Limerick FC in the last 12 months. Limerick's new boss will be their fourth in two seasons

AS the new year dawned and loyal supporters of Limerick FC waited to hear even a rumour of a new signing, there came a real surprise. The departure of Neil McDonald shocked everyone locally on the opening day of pre-season training.

A surprise, that couldn’t have been timed any worse, saw the former Newcastle Utd defender swap the Markets Field for the assistant manager's role at English league one club Scunthorpe Utd.

After managing the Super Blues to Premier Division safety last season the Newcastle native leaves behind a threadbare squad devoid of the depth required to compete in this year’s ten team national league top flight.

It is widely accepted that a first team squad in the region of 20 players will be needed to compete to stay in the division and with the current number of players committed to the Super Blues only around 13, I took a closer look at what might be required to put season ticket holder's minds at rest.

Armed with a fantasy that every football manager dreams of, I go about writing an imaginary blank cheque book to restore our local team to former glory.

The squad, while light in quite a few areas, is well stocked in the goalkeeping position where Brendan Clarke will start the season as number 1.

The Dublin-born shot stopper, who has tasted league and cup success in the past with St Patrick's Athletic, proved last season what a fantastic keeper he is.

With Bermudian international Freddy Hall now in his third season with the club, the competition for the number one jersey will surely provide the team with a solid base to begin from and allow me to spend the virtual funds elsewhere.

One of the highlights of last season was the emergence of some fantastic young local talent, one of which was defender Barry Cotter. After a couple of appearances at centre back Cotter went on to play the majority of his 11 first team games as a right back.

While Barry is definitely a player for the future, going into the season with one right back will not be sufficient and it is here that I begin the rebuilding. Acquiring an experienced right back must be considered one of a number of priorities and strengthening this department would help the younger members of the club's defence in their future development.

The Clare native is still learning his trade and could benefit from being in a squad with a player who is proficient in sensing danger and defending in one versus one situations as well as being part of a unit.

A solid defence is a must if we are to avoid the dreaded drop and adding experience to a defensive unit which at the moment includes four academy graduates is indeed a must.

The left back slot has a diamond in it already after Shane Tracy committed for his 11th consecutive season with the club.

Young Alan Murphy, who made his senior debut at the end of last season, is now in first team training having graduated from the club's U-19 academy and could be viewed as an able deputy for Shane whose experience will again be vital in the coming season.

It is important to mention though that Murphy, at the time of going to print, has not yet put pen to paper for the club and similar to Cotter could not be expected to be the ever present full back at this early stage in his career.

Another of the clubs promising young players, Tony Whitehead, a near ever present last season, is someone who has improved during that time.

Whitehead is at the moment our most experienced centre back. We also have Killian Brouder a left sided centre back graduate from Tommy Barrett’s conveyor belt of young defenders flowing out of the U-19 squad.

With the departure of Dave O’Connor I feel this is an area that requires immediate surgery if we are to have a chance of protecting both Clarke and Hall.

There are two types of centre back that operate in the modern game and with ample funds I would purchase both.

Firstly Limerick need a ball-playing centre back, blessed with above average pace to cover his team mates from the heart of the defence. We need a defender with the ability to take the ball from the goalkeeper and distribute comfortably into midfield or indeed to step in with the ball to the midfield area when in possession and start off attacks.

In our ideal world of blank cheques and a swelling squad, a clone with the attributes of former favourites Paudie O’Connor and Robbie Williams would fit the bill perfectly.

To partner our defensive kingpin, I feel we are still missing a dominant tough tackling centre back.

A player raised in the League Ireland who is dominant in the air, aggressive and experienced, who can deal with goal kicks aimed at the heart of our defence and who is also a threat in the oppositions penalty area from our set pieces.

A partnership like this in the heart of our defence could give us a very stable platform from which to begin life in a division that certainly will this year be more competitive than last.

With the departure of Bastian Hery to Waterford a hole exists in front of our back four and this is a hole that if not filled impacts so much else in the team.

We saw last season when the Frenchman was up to fitness and the pace of the league, how his form impacted the rest of the midfield unit positively.

It was only then that we saw the best of his midfield partners. With the Frenchman playing a deep holding role, Sean Duggan and Lee J Lynch were able to apply their natural game to proceedings.

On the flip side, prior to this, both were playing out of position and this affected the game in a far less positive way. That said I believe a natural holding player would be a fantastic asset to the squad.

We need a holding midfield player who can shield our two centre backs by screening in front of the defence and preventing the opposition playing through us. This type of player is normally a tough tackling technically proficient player who in possession plays safe passes to others in the midfield unit or directly into our front players.

This breed of player is a disciplined one, happy to be our most defensive midfield player waiting on the transition to defend while others in our team are attacking.

With the captain Shane Duggan committed for another year and a young addition to the midfield sector in Cian Coleman already in place, should Lee Lynch commits for another season then we would be competitive in this area of the pitch.

At this level though we must factor in solutions to injuries and suspensions. One consideration could be to dip into the local junior scene for midfield cover.

Jason Hughes, Stephen McGann or Stephen Bradley could all, I feel, offer something at this level and in this role.

If we continue to head up the pitch where last season we enjoyed the Brazilian flair of Rodrigo Tosi and his 14 goal haul, we realise that it is this area that could really define our season.

A younger and more athletic Tosi, who could add mobility to the aerial prowess, would be a dream for the North Stand of the Markets Field.

We also need a target man centre forward, one who can both hold the ball up and win the headers, that could create opportunities for team mates as well as adding to the goal count for the side as a whole.

Team-mates like Ogbene, Morrissey, William Fitzgerald, Colm Walsh O’Loughlin and Henry Cameron could all benefit from playing off a point of contact in our attacking third.

Such a player would be a huge asset in both boxes from set pieces but would also need to possess the sublime finishing that we saw, on occasions last season, from another of the fans' favourites.

At this stage even my blank cheque could be running out with the above looking like a dream for all Blues fans as we sit in wait for the latest episode in the topsy turvy world of the senior game in the sporting capital of Munster.

- For more on Limerick FC, see www.limerickleader.ie or search #LLSport.