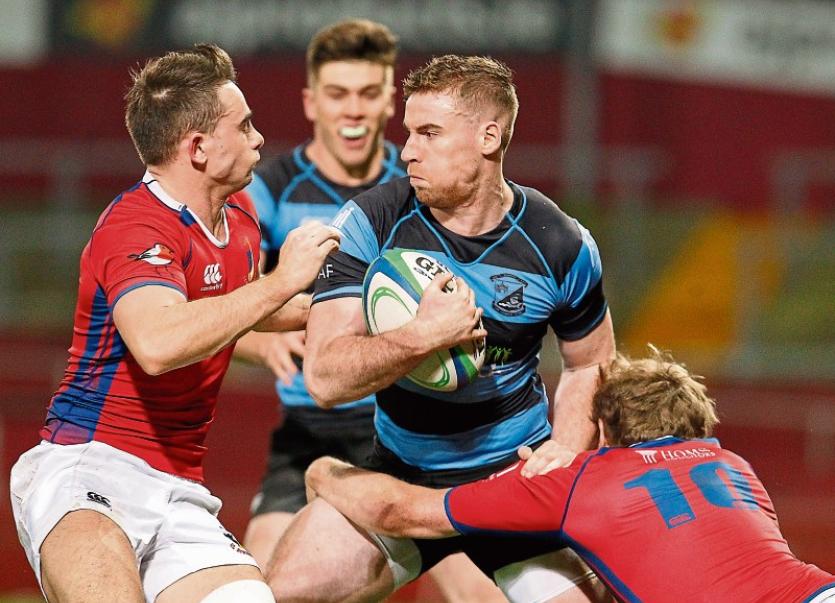 Shannon's Ethan Moloney is tackled by Jamie McNamara and Robbie Bourke, of UL Bohs, in their Ulster Bank League 1B meeting this season

SHANNON, UL-Bohemian and Old Crescent scored crucial wins as the Ulster Bank League resumed after the Christmas break on Saturday.

Tom Hayes’ Shannon side are four points clear at the top of Division 1B of the Ulster Bank League after scoring an impressive 25-3 victory over Naas on the back pitch at Thomond Park.

Next up for Shannon, who enjoy a four-point lead over second-placed Ballynahinch is an away date with eighth-placed Ballymena on Saturday, January 27.

Meanwhile, also in Division 1B, UL-Bohemian moved off bottom place, after scoring a gritty 17-15 comeback win over Old Wesley at Donnybrook on Saturday.

Second-from-bottom UL-Bohs, recently deducted five points for playing an illegal player, are now two points ahead of bottom-placed Dolphin in the 1B table.

The prospects of Christy Neilan’s side hauling themselves off the bottom of the table looked slim when the Red, Red Robins trailed 17-3 after 50 minutes.

UL-Bohs’ only points to that stage came courtesy of a James Hart penalty.

However, the Annacotty side dug deep at the start of the final quarter to turn the game on its head. Mike Lynch and Noel Kinane crossed for vital tries, both of which were converted by James Hart, as UL-Bohs built a winning 17-15 advantage.

UL-Bohs’ fans breathed a sigh of relief late on as a late penalty opportunity for Old Wesley flew narrowly wide.

Next up for the Annacotty side is a crucial Saturday, January 27 date with bottom side Dolphin on the 4G rugy pitch at UL.

Meanwhile, on Friday night, in Division 2B, leaders Old Crescent maintained their 100% record in the league this season thanks to an impressive 40-19 win over Sunday’s Well at Rosbien.

The win has seen Crescent move seven points clear of second-placed Rainey Old Boys who do have a game in hand on the Limerick side.

Crescent’s improved second half display proved key in this success after the sides finished level, 12-12, at half-time.

The home side scored six tries in all with top scorer Ronan McKenna bagging a brace of five-pointers as well as four conversions. Val McDermott, Alex Simpson and Brian Touhy also dotted down, while the home side was awarded a penalty try.

Next up for Old Crescent is a Saturday, January 27 meeting with Belfast Harlequins at Rosbrien.

While the majority of clubs have a break from All-Ireland League action until January 27, two Limerick sides, Thomond and Bruff meet in a crucial Division 2C derby fixture on Friday night at Liam Fitzgerald Park, 7.30pm.

Second-placed Thomond, who trail leaders Sligo by three points in the table, currently enjoy a seven-point advantage over sixth-placed Bruff ahead of Friday night’s clash.