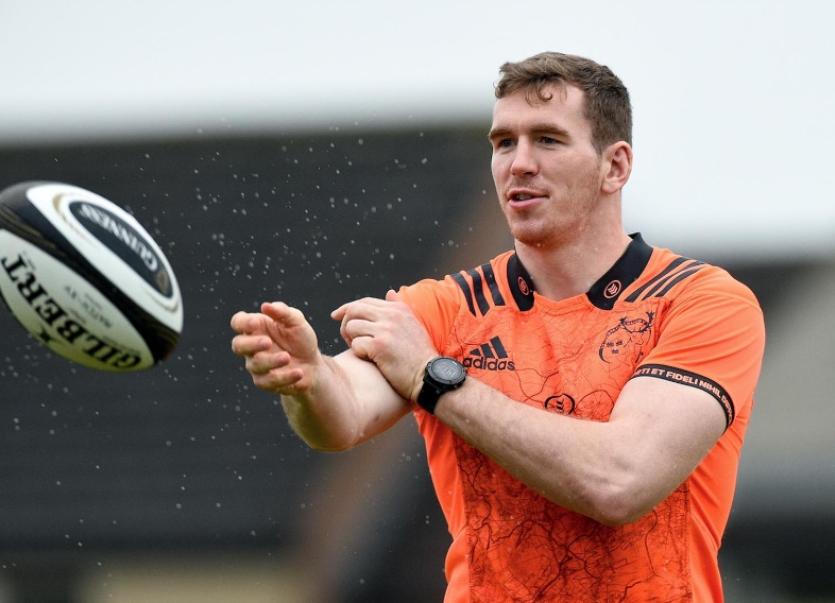 Chris Farrell who returns to the Munster line up this weekend

Irish international CJ Stander captains the side as Chris Farrell, Rhys Marshall and Conor Oliver all return from injury to start.

It is an all-international backline with Simon Zebo named at full-back as Andrew Conway and Keith Earls start on the wings.

Rory Scannell partners the returning Farrell in the centres as Ian Keatley and Conor Murray are back in the side as the half-backs.

Marshall starts at hooker with Mike Sherry covering, as Ireland internationals Dave Kilcoyne and John Ryan on either side of the front row.

Darren O’Shea maintains his place after impressing away to Ulster and Jean Kleyn comes into the engine room in place of Billy Holland, who misses his first game of the season through injury.

Jack O’Donoghue moves to blindside flanker as Oliver makes his first appearance of the season at openside and Stander captains the side from no.8.

Peter O’Mahony is among the forward replacements along with Mike Sherry, James Cronin, Stephen Archer and Robin Copeland.

Connacht Head Coach Kieran Keane has announced his starting XV to take on Munster. Irish Internationals Ultan Dillane, Kieran Marmion and Bundee Aki are all rested this weekend in an effort to manage their game time.

Prop Peter McCabe is given a start against his former club and he is joined in the front row by Hooker Tom McCartney and tight head Conor Carey. Quinn Roux comes into the second row and there is a third start of the season in the back row for 20 year old Sligo native and Academy player Cillian Gallagher.

Eoin Griffin and Pita Ahki form the new centre partnership and the back three is made up or Tiernan O’Halloran at fullback with Niyi Adeolokun and Matt Healy on the wings. Caolin Blade comes in at scrum half and will play alongside Jack Carty. Among the replacements, prop Conan O’Donnell and back row Paul Boyle make the step up from the Connacht Academy.

Speaking ahead of the clash with Munster, Connacht Head Coach Kieran said: "We have come through a series of big games and some guys have seen a lot of game time. Our internationals in particular are due a break especially with the Six Nations just around the corner. The squad is in a really good place at the moment. Obviously, we felt we could and should have won against Leinster and we came very close. We did the review during the week, we identified where we came up short and now we move on. The performance and effort levels from the boys over the past few weeks has been top quality and particularly in the interpro series we have seen some real character.

We have some changes in personnel for the Munster game so there are opportunities for other guys to show what they are capable of. Munster will be hurting after their two games over the Christmas period and at home they will be a massive challenge. They have quality all over the park and I’m sure they will be really determined to get back to winning ways before they get back to European competition".
#MUNvCON