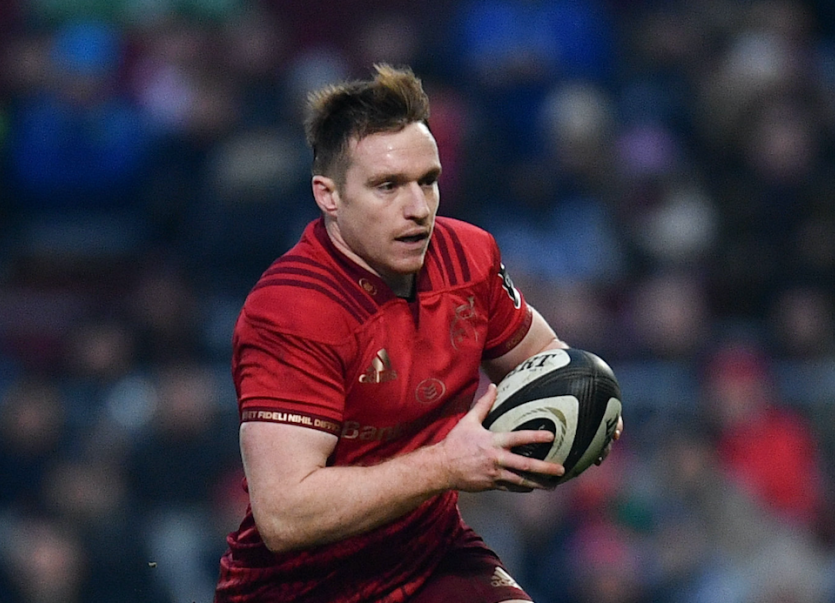 Rory Scannell who will line out for Munster tomorrow against Connacht

RORY Scannell will line out in the centre for Munster this weekend having missed the Ulster game due to squad rotation.

With Jaco Taute, Chris Farrell, Sam Arnold and Keith Earls all partnering Scannell in the centre at some point this season, the Cork man is fast becoming a constant in Munster's best XV.

Not too many centres fit these days?

A few lads have knocks alright. Unfortunately I am the last man standing at the minute. Chris Farrell is back this week and hopefully he goes well. It is great to see Earlsy back in the centre at the weekend too so I am sure we’ll manage.

Different partners at 13 all season, hard to get going?

Unfortunately the injuries are part and parcel of it. The guys you mentioned there, Taute, Earls, Farrell, it is great to have that squad depth. Having three internationals to play with at 13 is not bad either. I think we need a bit of consistency there and the quicker we get everyone back the better.

It was really good watching the first half anyway. It was a bit frustrating watching the last 20-25 minutes alright. I think we were still well up with 60-65 minutes played and I would have thinking at that stage that we would have been doing our best to close out the game. Then the tide began to swing and we gave them an in. Obviously then we were down to 13 men and we left them in for a few five pointers and we were lucky in the end to come away with a losing bonus point.

Does this game become an Irish trial in your head?

You know that Joe Schmidt and the other coaches are looking at mainly the European games and the inter pro derbies. They are looking at certain lads going up against each other and it would be in the back of your mind, but for the moment, we are just concentrating on Munster. This is an important time for the club. That is at the forefront for us at the minute, but I am sure some players might have it at the front of their minds alright.

Point to prove this weekend against Aki?

What do you make of the last two performances of Munster?

We were slow out of the blocks against Leinster and you know, if you give a team of that quality a lead like that you are going to struggle. I think we played some good rugby in the second half. I think the score in the second half was 19-7, but at that stage, it was too late. As you say, it was the other way around against Ulster. We will be looking to get some balance there and put in an 80 minute performance rather than a 40 minute performance.

It would help if you had 15 players on the field too of course. Is discipline an issue?

We have addressed that this morning. When you are giving away double digit penalties, especially away from home, in big games like that, with excellent goal kickers, you are going to struggle. We you build up that number of penalties you are also going to get some cards too. I think our discipline was quite good in the Leicester games. We gave away seven penalties in Welford Road and came away with a great win, but you are going to struggle if you give away that number of penalties and it critical to have 15 players on the pitch for the full 80 minutes too.

It could easily have been two from two, but is there more pressure this week now?

I don’t think so no. We just need to put in a good performance. I am sure if we do that the result we hopefully go the way we want and that will help to build confidence going into the next two weekends in a different competition. But I think we are second in our conference and top of our European Pool, so I don’t think we will look at it too negatively, we are in a good place and we need to keep the place positive.

How hard is it to analyse and prepare for different referees every week?

You do look at the referees alright, but I do think most of the penalties we are giving away at the moment are in our control rather than the referee’s. I think if we cut those ones out and adapt to the different referees each week on the pitch I am sure our penalty account would be a lot lower. I think it is about controlling the controllables and not every decision is going to be right, but I do think we need to cut out the ones that we can control ourselves and not bring the referees into it.