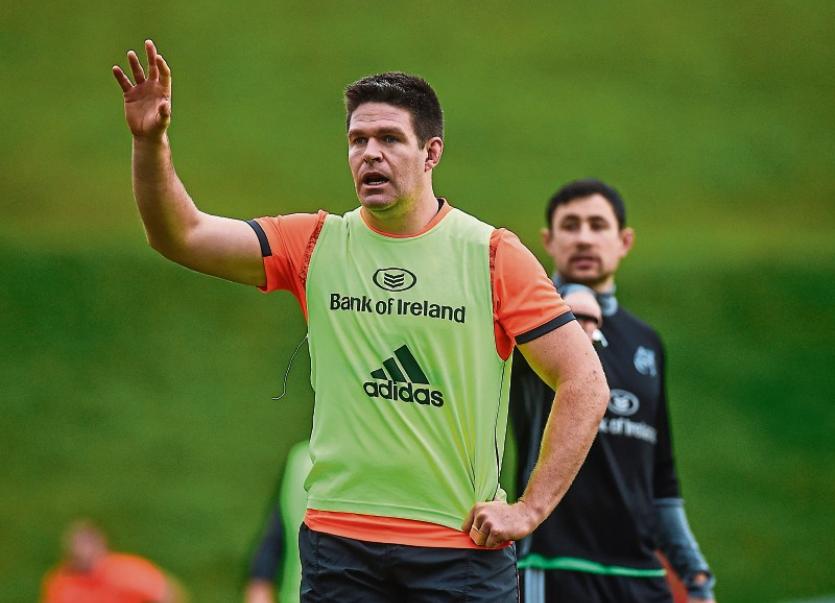 Munster play Connacht this Saturday night at Thomond Park at 7.45pm in the Pro14, with an away trip to Racing 92 in Paris just seven days later.

Billy Holland, who was replaced after 22 minutes for a HIA, is following return to play protocols, and with a five-day turnaround for Connacht will play no part for the first time this season.

Chris Cloete is another who is following return to play protocols after reporting symptoms post-match.

Calvin Nash (hip), Niall Scannell (ribs) and Tommy O’Donnell (shoulder) will need to be assessed further with the trio not expected to be available this weekend.

James Cronin, who was treated for cramp on New Year’s Day, was due to train today, while Ronan O’Mahony is expected to train later this week after falling foul of seasonal illness.

A further positive sees Chris Farrell return to training after overcoming the knee injury sustained while playing for Ireland in the November internationals.

Rhys Marshall continues to follow return to play protocols for a concussion sustained against Leicester, while Dan Goggin (knee) and Gerbrandt Grobler (ankle) will continue with their return to play rehab this week.

With an extensive injury list, Munster must try and balance their selection policy over two weekends to ensure as strong a team can take to the pitch for the vital Champions Cup round five clash.

Adding the above names to Tyler Bleyendaal (neck), Jaco Taute (knee), Munster's squad selection for this weekend's game with Connacht will be based on both preparing certain combinations for Racing 92, while also making sure that the side does not ship any more injuries ahead of the meeting with old friend Donnacha Ryan.

Traditionally Munster would play close to a full strength side a week ahead of a Champions Cup game.

If that is indeed the case, the side that lines out this weekend will feature Conor Murray, CJ Stander, Peter O'Mahony and Ian Keatley who were all given a few days off this week.

There is depth in certain positions with hooker and the backrow ably covered, as well as scrum half, however, should Calvin Nash not recover from injury, coupled with Sam Arnold's impending suspension, Keith Earls might have to play at 13 this weekend and again in Paris.

Ronan O'Mahony is set to feature for this club Garryowen this weekend, as is backrow Conor Oliver.

Munster will sweat most on the second row and loose head positions however. Should James Cronin not recover, fans will surely see David Kilcoyne start both games for the province.

With Munster particularly light on centres, fans will also be hoping that both Earls and Scannell come through unscathed this weekend as next on the depth chart is Dan Goggin who only returned to on field training last week.