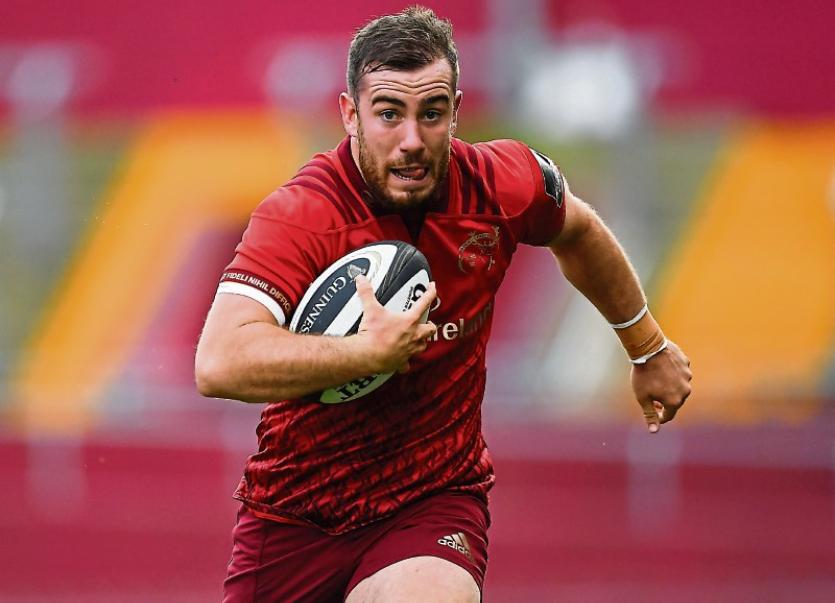 Munster go up north: JJ Hanrahan is set to be handed the number 10 jersey for the New Years Day clash with Ulster at Ravenhill. The former Northampton Saint is vying for the starting 10 jersey

JJ HANRAHAN believes his two-year stint at Northampton Saints can be deemed a success, although his game time with the Aviva Premiership giants was cut short by injury.

The provincial rivals will run out for their Belfast clash still smarting from their respective Christmas defeats in the Pro14. Munster have lost all three of their interprovincial fixtures this season.

Hanrahan has made just three starts for Munster since returning from Northampton due to a shoulder injury.

With Ian Keatley likely to be rested by Munster for the trip to Kingspan Stadium as a result of his heavy workload of recent weeks and Tyler Bleyendaal out of action at the moment due to a troublesome neck injury, 25-year-old Hanrahan is in line to start the January 1 fixture.

Asked how he reflected on his two-year stint at Northampton, Hanrahan said: "Personally, I suppose it depends on what you deem success as.

”If you deem it as on the rugby pitch, playing every week, probably not so much because my second year I was only available for 10 games through injury, so you would say no in that aspect, but in terms of an overall holistic approach, from a growth mindset, you would say yeah.”

Hanrahan said the biggest area of learning for him during his time at the Saints was in relation to game management.

"I suppose the main thing is the game management side of things. A lot of the time when you are over in the Premiership a lot of it can come down to penalties and things like that, sometimes it can be more of a not playing in your own half, put the ball in their half.

“It is more of a control game. I learned that from being in England and being in the Premiership.

"The physical side of stuff as well, looking after your body, what it takes to play 25 games a year, they are all learnings along the way.”

Hanrahan insists he has not been frustrated by his relative lack of gametime since his return to the province at the start of the season.

"I wouldn't say frustrating. I think the main thing for me is that coming back with a shoulder injury I was out for the bones of six months and I suppose I missed the first five games of the season, I was just trying to find my feet early days and you can't expect really to walk into this team, so for me it is just grafting every day and keeping my head down and just trying to work on.

"I am happy enough (with my form). I think I can improve, there is plenty still to improve on.

“Rugby is an on-going battle every day. Some days are good, some are not, especially in the number 10 role.

"Some days you can have really good games, but there is so much more involved than just you to make you perform well. Overall, pretty happy, but keep building.”

Hanrahan said that whoever gets the nod to start at out-half for Munster in Belfast will need to be at the top of their game.

“If I get the chance against Ulster it is a big opportunity. It is not easy up there. Kingspan can be a hostile enough place as we all know, but I think it is a challenge you have to relish if you are going up there.

"They are coming off a big defeat against Connacht, so they will definitely be hurting and they are going to come out of the blocks all guns blazing, so whoever Johann selects for that game, they would want to be ready for it, put it that way.”

Asked how the atmosphere at the grounds for away interprovincial fixtures compared to away dates in the Aviva Premiership at somewhere like Welford Road, Hanrahan said:  "Welford Road is a funny one. I said after playing the Welford Road game for Northampton, I felt like I was in Thomond Park again. It was the closest feeling I got to feeling like Thomond Park.

"For me, being over there, you can feel the intensity, but here it does be that bit more personal because you know the guys a lot better and I think that is the main difference."

Hanrahan has been impressed with the resilience Ian Keatley has showed to the setbacks he received at Munster in previous seasons.

“It is easy to kick someone when they are down, but I think it shows the strength of him to come back out, get back into Irish camp, play well off the bench for Ireland on two occasions when he got the opportunity and bring that form back into Munster and I think it is a good mark of the man."

After their New Year’s Day trip to Belfast to take on Ulster, Munster will host Connacht at Thomond Park on January 6.