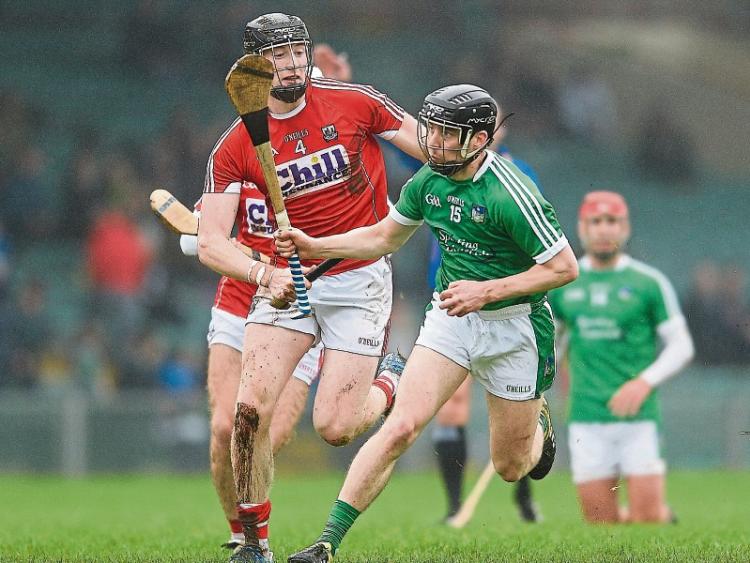 Graeme Mulcahy of Limerick in action against Damien Cahalane of Cork during the Co-Op Superstores Munster Senior Hurling League final last season. This years competition throws in on Saturday

The year has not yet come to a close and remarkably the Limerick senior hurlers will play Cork in the opening round of the Munster league.

It is, of course, madness that this tournament survived and its timing leaves a lot to be desired.

It would have made more sense to remove it from the GAA calendar and allow players time to draw some breath before the real action begins.

The two big teams in Munster, Tipperary and Waterford, have rightly decided not to play and that takes away any credibility this tournament might have had.

Limerick will face Cork in Mallow on Saturday evening at 5pm. You can be sure a few loyal supporters will make the journey. Cork have a new manager in place and we can expect John Meyler to use this tournament as a starting base for some new players.

Limerick know well what they have. The task facing John Kiely and his management team is to find a formula that will get the best from his players. What we do know is that Limerick have some serious gaps to fill and in this regard it will be interesting to see what changes the management have in mind for the year ahead.

Limerick didn’t have a good National League in 2017 and for the first time in many years they did not win a game in the championship.

That, by any standards, wasn’t a good year and all concerned will be looking for progress in 2018.

This Munster League won’t enlighten us any great deal but it will have some benefit in getting the players right for the league. This will be a very different year from previous ones. The league will be ran off much faster and the gap between league and championship is greatly reduced.

The new format of the Munster hurling championship will see a round robin system in place for the first time and Limerick will have two home games. It’s very hard to know what this new championship format will bring but from Limericks point of view it might well provide opportunities for a young side.

Ever before a ball is hit in this year's championship I get the sense that teams are working very hard. Tipperary have freshened things up a bit and Michael Ryan knows his side were not far off winning back to back titles last year. I expect Tipperary to be buzzing in 2018. They are working hard now for some weeks and many of the players that have been called in have size and power on their side.

Waterford, beaten All Ireland finalists, will have one more go under manager Derek McGrath. They will have learned a lot of lessons both on and off the field in 2017 and we can expect them to be in the mix as serious contenders.

In the latter stages of this year the Limerick players did a bit of boxing and they will need to show plenty of fight to make an impression on both league and championship in the year ahead.

Even at this stage. one would feel that Limerick will have to hurl really well to come out of Division 1B. The last game will be against Galway and Galway will have home advantage. While this is a young Limerick team many of them have a lot of hurling done and are well ready to survive at this level. The life of a county player is not what it once was and it’s a case now of taking your opportunity when presented. The demands on players are significant and many are learning to their cost they also need to manage their prospects for good employment.

In the past few weeks the Limerick management have appointed Declan Hannon as Captain. The Adare man showed much better form in 2017 than in previous years but will management look to move him from centre back? Hannon has the goods and many would say he is a more natural forward.

There is little doubt that Limerick need to add a bit of punch in attack and in that regard moving Hannon is a real option. If that was to happen then Kyle Hayes would fall in at centre back. The Kildimo Pallaskenry youngster had a superb opening season with the senior hurlers and was without the Limerick hurler of the year at county level. For a chap so young he showed a great willingness to work hard and provide leadership for the team. That is a rare commodity in a debut season but Hayes wearing six and with Diarmuid Byrnes and possibly Gearoid Hegarty on the other wing might just provide the sort of stability that is needed.

Limerick will have to plan without the Na Piarsaigh players for the National League because they are expected to reach the All Ireland club final on March 17th. That will provide opportunities and valuable game time for a number of other players.

Some players have called it a day and that will leave a gap as far as experience is concerned but the time has also come for some of those young players to lay a marker at senior level. Young teams have won titles before and from Limerick's point of view this team and the county badly need to see the senior team doing well.

Morale is at its lowest for some years and it will take a bit to lift it. The one sure way of doing this is to show people they have hope, they have a chance of winning, a nod that the team are going in the right direction.

The foundation for the season will be cast when Limerick play Cork in this Munster league. That foundation must be solid, it must steel that will provide building blocks to success later in 2018.

Former Limerick senior hurler and footballer Tom Marsh was laid to rest last week. He was a all round sportsman that was gifted with natural talent. He got the only score when St Munchins won the Munster Junior Schools Rugby Cup in 1970. The score was 3pts to nil. He also played soccer at a high level and had trials with Southampton in the early 70s. It was however at hurling that football that he was really at home. He won medals at all grades with Claughaun including a senior football title in 1982. He also won a junior hurling title with Na Piarsaigh in 1990. That win set the foundation for what was to follow years down the line. To his family and friends I offer my sincere sympathy.