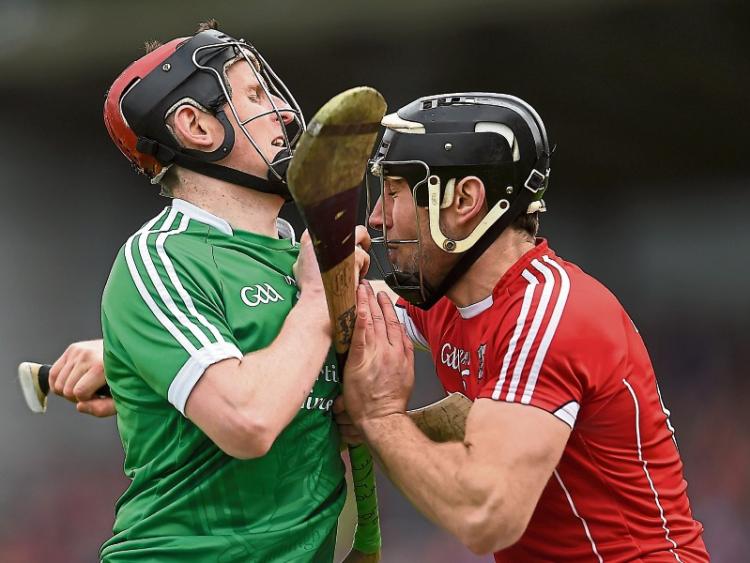 David Dempsey of Limerick in action against Mark Ellis of Cork during the Allianz Hurling League Division 1 Quarter-Final match at Páirc Uí Rinn last season. The two sides meet in Mallow on Saturday

John Kiely’s men are Mallow bound for a round one game in the 2018 Co-Op Superstores Munster Hurling League. The Cork game, just over just 24-hours before ringing in the New Year, has a 5pm start.

Limerick have made a winning start to each of the last five years – a replay defeat to Clare in 2012 the last time the men in green lost in the opening game of a new season.

Indeed Limerick have reached the final of the early season provincial competition in each of the last three years – losing to Cork last year, to Clare in 2016 and winning against Cork in 2015 under captain Donal O’Grady.

As is always the case, Limerick will be in experimental mode for the Munster League – games follow in the Gaelic Grounds against Kerry (Sunday January 7) and Clare (Sunday January 14).

Ten of that panel won’t be available as Na Piarsaigh prepare for their February 10 All Ireland club SHC semi final with Derry’s Slaughtneil in Dublin’s Parnell Park.

Last leaves the Limerick management with 28-players and a number are carrying knocks that may rule them out.

That means those who could make their senior debuts are Kilmallock duo Paddy O’Loughlin and Oisin O’Reilly, Feohanagh’s Seamus Flanagan, Doon’s Barry Murphy and Daragh Fanning of Pallasgreen.

Saturday’s game in Mallow could see Adare’s Declan Hannon lead Limerick as captain for the first time. The 25 year old replaces James Ryan, who retired from inter-county hurling in early November. Ryan captained Limerick in 2017, Nickie Quaid was 2016 captain and prior to that Donal O’Grady was captain for three years.

Declan Hannon will have Bruff’s Paul Browne as vice-captain.

Hannon is entering his eighth season with the Limerick seniors – he made his debut as a teenager in 2011. Just four of the panel – Seamus Hickey, Paul Browne, Nickie Quaid and Graeme Mulcahy – have longer service.

In total there are 10 additions to the 2017 championship panel. In total, 16 players from this year’s All Ireland U-21 winning panel are included – five getting a first senior call-up. On top of this season’s U-21 All Ireland winners, there are also seven from the 2015 All Ireland U-21 side.

In total 10 of the panel are two-time All Ireland U-21 winners.

A further five players can be traced back to the 2011 Munster U-21 winning side, while the three elder statesman are Seamus Hickey, Richie McCarthy and Tom Condon – all from the 2005 All Ireland minor final.

Eight of the new-look senior panel will be eligible for the U-21 grade in 2018 – Peter Casey, Kyle Hayes and six of the newcomers; O’Loughlin, Grimes, Boylan, O’Reilly, Murphy and Flanagan.

Although 66% of the panel are under the age of 24, in his first season at the helm, John Kiely and his management gave seven different players a championship debut. In total 27 of the 38 players on the 2018 panel have championship experience ahead of the extended four game Munster SHC next May and June.

If Limerick do reach a fourth successive Munster League final it will be played on Sunday January 21 – one week ahead of the start of the Division 1B campaign in the Allianz Hurling League when Laois come to the Gaelic Grounds.