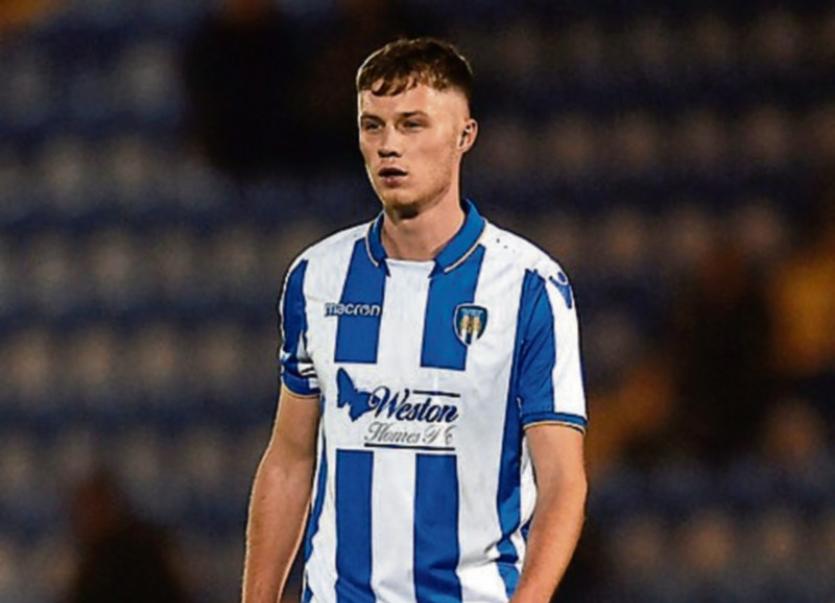 THE Christmas period is a busy one in the calendar of every professional footballer in England so I was delighted this week to catch up with Limerick's last export to the professional game in the UK, Sam Warde.

I wanted to discuss with him the reality of leaving behind his family on a journey to fulfil his dream, to keep improving as a player and one day play in the Premier League and represent Ireland at a major tournament.

Warde returns home to Limerick on December 27 for a few days after playing most of this season with the Colchester United u-23s.

Sam started his football career as a five-year-old and was a ‘one club’ player in Limerick, having played all his football from small sided games to U17 level with Mungret/Regional.

He remembers with fondness his time with Mungret/Regional and the success achieved with them at schoolboy level.

In 2011 Sam was called in to participate in the FAI Emerging Talent programme under the guidance of Denis Hynes, James Scott and Declan Farmer improved as a player.

In 2012 under Mike McCarthy, Eamon Doyle and Declan Hyde, Sam represented LDSL in reaching the quarter final of the Kennedy Cup, as footballing memories from home.

A lot of young players dream of emulating their heroes and playing in the professional game so I asked Sam how he made the breakthrough from local football to his current professional club Colchester United.

“A year or so after the Kennedy Cup, in 2013, things started to progress for me. I was involved in the FAI International assessment days and was capped for Ireland at U15 level. Once this happened interest from England began and I was invited to attend trials at Aston Villa and Huddersfield Town. This led to an offer of a two-year Academy Scholarship contract with Huddersfield Town so I moved to the UK in June 2014 as a 16-years-old,” Warded continued.

When asked about the challenge of making the move, Warde admits it was daunting.

“As you can imagine it was both daunting and exciting but with the support of my family and the fact that a few Irish lads I knew had been over a year before me, helped me to settle in quickly. It took time to adapt to being away from family and friends and having to do everything for yourself. But you learn to adapt quickly as you have no other choice really if you want to be a professional player in England.

"I embraced the challenge worked hard and in 2016 achieved the next stage in my career by signing a professional contract with Huddersfield Town.”

Warde was part of a squad who were flying high. Winning promotion to the Premier League last season.

Going back to Sam leaving Limerick as a 16 year old, I asked him what prepared him on the football front, for such a big move at a young age to pursue a career in football?

“When I played with my local team Mungret/Regional FC U15/16/17 I was lucky enough that the team was of a very high standard which meant training was always challenging and at a good standard. When I progressed into the FAI Emerging Talent programme the coaches provided the guidance on the structures and disciplines required to progress into full time football which was invaluable to me.

"The time being part of the Schoolboy International set up was also of great benefit because the sessions were filled with talented players who aspired to a move to an English club which showed me the standard and expectations required to become a full-time footballer.”

The advantage of UK clubs is the huge resources at their disposal and their academy structures contain the best players from a nationwide scouting programme from a very young age.

Warde believes this is a huge help to kids in terms of coaching hours.

“The English club academy programmes start at a U7/U8, so players selected for an academy scholarship already have several years of professional coaching and in terms of contact hours have a big advantage over players who came through the schoolboy system in Ireland As a scholar/ trainee the biggest challenge was getting used to full time training which often consisted of two or three sessions a day.”

“It takes time to adjust to the training schedules and the first few months were very tough until I adjusted to the routines. But there was always support from the coaches especially Tony Cars and Leigh Bromby and all the academy staff at Huddersfield which helped me greatly.”

Like with all sport, players have to move up levels to progress, something Warde relished while also finding it challenging.

“When I stepped up to U23 level the challenges were different and the transition was almost as big as when I first moved over. It’s just completely different; I went from playing against people who were a year or two older than me, to sometimes playing against thirty year old first team players with hundreds of league appearances in the U23 games who need some minutes for fitness.”

“The physicality and speed of the game is a lot more intense than academy level as clubs can play professional players who may be coming back from injury or suspension so you don’t get as much time on the ball. But this is also where the first team manager gets to have a look at young players with a view to stepping up to the first team.

"It’s a fantastic opportunity to impress weekly and that is my next goal is to break into the Colchester United first team squad and continue to improve my all round game.”

Sam, I found to be a confident, well-mannered and level headed young man who had some sound advice for younger players in Limerick hoping to become a professional footballer one day

“Always enjoy playing and express yourself on the pitch, don’t listen to people who try to change your game in a negative way, just play your own game, have a dream and follow it, with discipline and drive anything is possible”.

Wise words indeed from one so young. A bright talent for all to look up to.