'Simon Zebo is cocky but in a good way' - Keith Earls 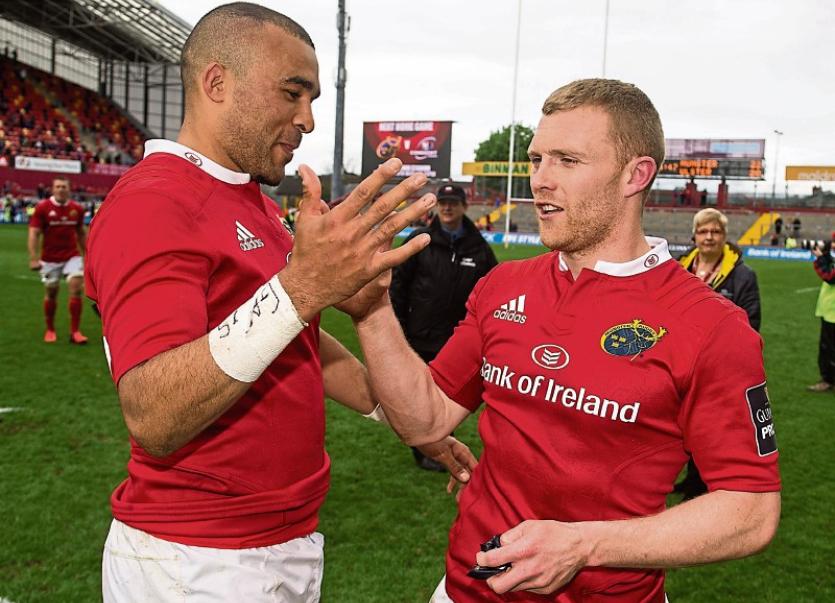 Simon Zebo and Keith Earls celebrate together at Thomond Park

KEITH Earls revealed he didn’t know quite what to make of Simon Zebo when he first arrived at the Munster Academy.

Thirty year-old Earls thought Zebo was a bit too flash and too self-confident when he first broke onto the scene, but his opinion of the Munster full-back has changed utterly in the intervening period.

Zebo will leave Munster next summer for pastures new and Earls for one will miss him.

Earls, who is expected to make his long-awaited return from injury in the St Stephen’s Day Guinness Pro14 clash with arch rivals Leinster said: "I first came across Simon in the Academy.

“I only told him recently that I didn't like him when he first came in and he was devastated because we weren't used to this flamboyant fella, full of energy and I suppose a cockiness.

"Getting to know him now it is a good cockiness and he is just hilarious.

"Jeez, I love him now. We would do anything for him. Even though he is a messer and stuff, he is a massive personality for us as well.

"Simon is just happy all the time. He has great energy, he doesn't let anyone get him down. That is one thing a lot of us can take from him. He can get a hard time, sometimes, but he just goes out and he genuinely just loves rugby.

"You can always count on him in the big games, but I think it is just his general energy around the place, his general happiness towards life.

"The majority of it would be pure talent. Obviously there are lads around him to put him into space. Myself and Zeebs have built up a good relationship. On the field he has gotten me many tries over the years playing outside him.”

Earls will return to a Munster side in good shape ahead of a run of three inter-provincial derbies in the Pro14. Back-to-back wins over Leicester Tigers in the Champions Cup has seen Munster take control of Pool 4, with the two-time winners enjoying a four-point lead over Racing 92.

Among the stand-out performers for Munster in their historic back-to-back pool success over the Tigers was centre Sam Arnold.

Twenty one-year-old Arnold has started the last four games for Munster, including featuring in the European Cup for the first time where he has formed an impressive midfield partnership with Rory Scannell as Jaco Taute and Chris Farrell are currently sidelined with injury.

Former Ulster player Arnold joined Munster on a two-year deal at the beginning of last season.

Earls said: "Sammy has worked unbelievably hard since he has come down to Munster. He is the biggest freak I have seen when it comes to power. He is a little ball of muscle and is so aggressive.

"He has only got one gear and that is 100%. I had good chats with Sammy over the summer. He was struggling and stuff. He is a good fella and he puts in hard work. It is unfortunate for the lads who have been injured, but he is getting a chance and has taken it.

"He is flying it and I am delighted he is getting his chance.”

Earls appreciate the level of stress any players negotiating new contracts at present are under.

Earls is contracted to the IRFU and Munster until the end of next season. There was speculation that the Limerickman was considering joining Saracens after talks on his current contract stalled.

Earls said: "It is always the worst time of the year. You are just trying to sort things out. You literally just want to play rugby, but you want to make sure your family and yourself is being looked after as well.

Asked why had chosen to remain at Munster rather than move abroad before signing his current deal, Earls said:  "Getting to play with the club I grew up loving.

”Home comforts are great but sometimes fellas like a challenge and some fellas want to see if the grass is greener. That is always in the back of your mind.

"Obviously it is the perfect career to try a different lifestyle as well.”

Earls said the lure of continuing to play for Ireland was a big factor in his decision to remain at Munster.

“Obviously there is the (British and Irish) Lions but playing for Ireland for your country is the highest standard, and you want to test yourself every year.

“The 6 Nations is a massive tournament, the November internationals are always challenging when you get to play against the southern hemisphere. It’s huge, it’s a lot to give up to head away to France or England or wherever.”