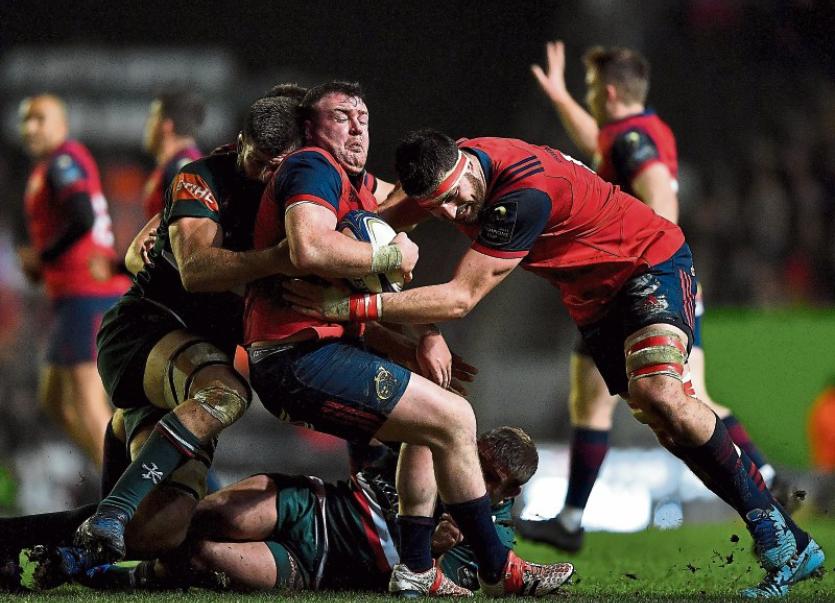 GRITTY Munster took a giant step towards qualifying for the knock-out stages of the European Champions Cup for a seventeenth time after scoring a famous 25-16 win over the Leicester Tigers in Pool 4 at Welford Road on Sunday night.

In becoming the first side to complete a home-and-away double over the Leicester Tigers in the back-to-back fixtures in the European Cup, Munster have earned a four-point lead over second-placed Racing 92 in Pool 4.

A 43rd minute try from number eight CJ Stander and 20 points from the boot of out-half Ian Keatley secured victory for a Munster side which was superbly led by captain Peter O'Mahony.

Special mention too for hooker Kevin O’Byrne, who turned in a terrific display on his first ever start in Europe.

Munster had thumped Leicester 38-0 at Thomond Park at the same stage of the Champions Cup 12 months earlier, only for the Aviva Premiership side to reverse the result at Welford Road a week later. So Munster had plenty of advance warning over what to expect yesterday, having thumped the Tigers 33-10 in Limerick nine days ago.

The Tgers brought greater physicality and intensity this time, but poor discipline cost Leicester dear in the first half when they racked up 10 penalties and had prop Dan Cole sent to the sin bin just before half-time. Munster hoovered up 10 precious points when Cole was off the field.

Munster also lost prop John Ryan to the sin-bin in the second half, but crucially the visitors held Tigers scoreless during the spell he was off the field, thanks to a huge defensive effort.

Munster face a trip to Paris to take on Racing 92 in their next outing in the Champions Cup in January, before entertaining Castres Olympique in their final Pool 4 fixture.

Ill-discipline at line-out time cost Munster a penalty in the second minute which was converted by Tigers out-half George Ford for a 3-0 lead for the home side.

Munster responded well and, following a fine touchfinder from Keatley off a penalty, the out-half quickly tied the scores up 3-3 as Ben Youngs infringed at ruck time.

Parity didn't last long, however, as second row Graham Kitchener put Matthew Tait into a hole, following a line-out, and the full-back duly scampered clear to score. Ford converted for a 10-3 advantage to the home side.

Tigers appeared to have learned more in defeat from Thomond Park eight days earlier as Munster struggled to match their physicality at the breakdown.

Munster enjoyed 66% possession in the opening quarter and gained some reward for that superiority when Keatley landed a second penalty goal on 24 minutes.

Leicester's poor discipline continued to be a half as the half wore on with the Tigers racking up eight inside the opening 34 minutes. In contrast, Munster were penalised just twice.

Keatley kicked his third penalty goal to bring themselves within one point of their hosts at 9-10.

And visitors Munster got their noses in front at 12-10 when Keatley landed his fourth penalty less than a minute before half-time. French referee Mathieu Raynal finally lost patience with the home side and Tigers prop Cole was finally sin-binned after being penalised for a fifth time in the opening 40.

Munster needed to take advantage of the Cole sin-binning and they did when number eight CJ Stander burrowed over after Munster stole a Tigers line-out and scrum-half Murray sniped through a gaping hole. Keatley's conversion made it 19-10 after 45 minutes. It was Keatley's seventh European try in 29 matches.

Leicester responded and a Ford penalty on 52 minutes reduced Munster's lead to 19-13. Munster lost replacement prop John Ryan to a yellow card on hour mark when he knocked the ball out of scrum-half Youngs' hand and Ford's made it 19-16.

Munster fly-half Keatley added two further penalties in the 73rd and 78th minutes to seal a precious victory, denying the home side of even a losing bonus point in this fiercely competitive tie.