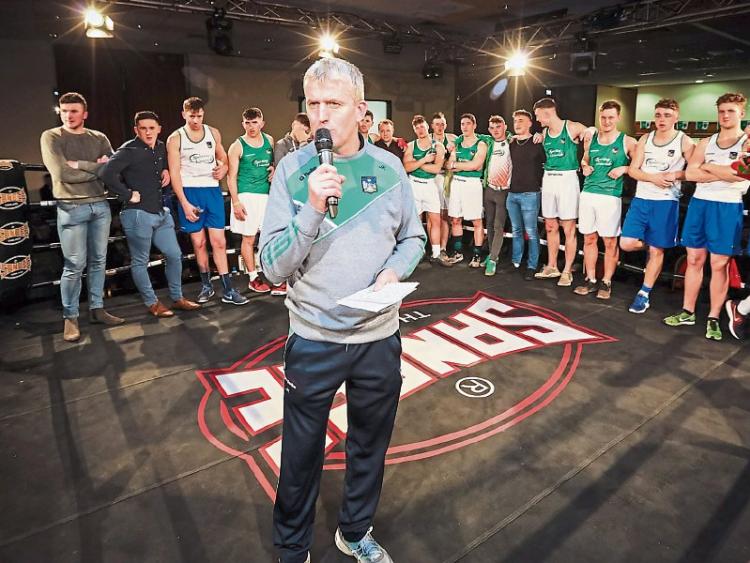 JOHN Kiely have vowed that all involved with the Limerick senior hurlers will “redouble our efforts” after admitting that they “were not happy” with 2017.

“I, the backroom team, the management team and the players were not happy with our lot out of last year but we are going to redouble our efforts to make sure that we get where we want to get this year,” stressed Kiely.

”We are really looking forward to the year ahead – We are going to leave no stone unturned over the next eight months,” he vowed.

”We are hugely united - we might fight in the ring tonight but when we leave here we are a hugely united bunch of guys totally focused on one thing and that is May 20 next year.”

Kiely was fulsome in praise of all that supported the Night of Boxing in aid of their 2018 Training Fund.

”There are certain things that we want to do with the lads - we want to be able to give them the very best that is required in order to get them to achieve success. We want to be in a Munster final this July and we have a huge championship campaign coming up.”

There is no extended Christmas break for Limerick with Saturday December 30 confirmed for their opening game of the new season – a Co-Op Superstores Munster Hurling League trip to Mallow to play Cork on the final Saturday of the year. Throw-in 5.00.

The top two teams will qualify for a January 21 final ahead of the January 28 start to the Allianz Hurling League – Limerick are home to Laois in Division 1B.