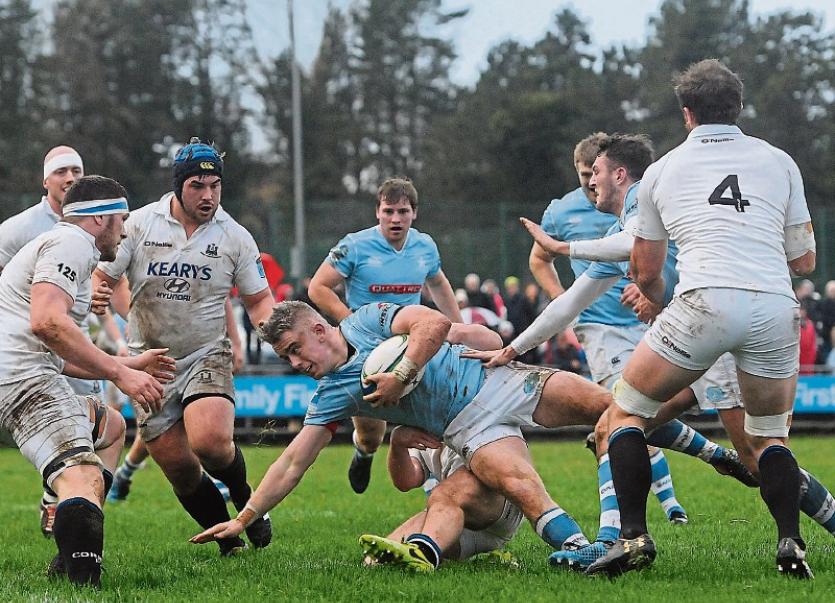 Saturday’s games are the reverse fixtures from last weekend in the unique back-to-back series.

Third-placed Garryowen, in Division 1A, were one of just three Limerick sides to record wins last weekend.

Garryowen eased past great rivals Cork Constitution 24-17 at Dooradoyle on Saturday in the first of three meetings between the sides on successive weekends.

The sides renew rivalry at Temple Hill in Division 1A this Saturday, 2.30pm before facing-off in the Munster Senior Cup on December 16.

Garryowen actually slipped from second place to third in the 1A table, despite Saturday’s win over Cork.

With Munster A involved in British and Irish Cup action this weekend, all top flight Ulster Bank League clubs look set to be without key players this weekend.

Another factor which is influencing the make-up of squads at present in the AIL is the clash with third level college exams.

Also in Division 1A, Young Munster will be desperate to get back to winning ways when hosting Terenure College at Clifford Park.

Munsters’ suffered a 32-13 reverse at the hands of second-placed Terenure at Lakelands last weekend.

The defeat was Munsters’ third in succession in the league and has seen the Greenfields side slip to seventh place in the table.

Munsters’, who have won just three of their nine top flight league games this season, have now fallen 12 points off the play-off places at the mid point of the regular season.

Realistically, anything less than a win for Munsters’ this weekend would effectively end their hopes of making the play-offs for a third successive season.

Another Limerick club anxious to sign off on 2017 in the Ulster Bank League with a win is Shannon.

Tom Hayes’ charges suffered a 42-15 thumping at the hands of new leaders Ballynahinch who they renew rivalry with at Thomond Park this Saturday.

The game, on the back pitch, will kick-off at the earlier time of 1pm, with Munster facing Leicester Tigers in a crucial Champions Cup match on the main pitch later in the evening.

After winning each of their opening six fixtures, Shannon have lost two of their last three and will be anxious to avoid double defeat to leaders ‘Hinch in Saturday’s top-of-the-table clash.

The Ulster side enjoy a one-point lead over Shannon in the table at the half way stage in the season.

Saturday’s game is the meeting of the most prolific points scorers in the Division, Shannon, who have averaged 27 points per fixture, and ‘Hinch, who boast the meanest defence, conceding an average of 13 points per outing.

Another Limerick side desperate to pick up a win in 1B is relegation-threatened UL-Bohemian who face a trip to the Mardyke to face UCC.

UL-Bohs had to make-do with taking a losing bonus point from their 22-15 defeat to UCC on the 4G rugby pitch at UL last weekend.

The Red, Red Robins dropped to ninth place in the table on the back of this defeat, seven points ahead of basement side Dolphin and three pointa adrift of eighth-placed Ballymena.

UCC are currently fourth in the table.

In Division 2B, leaders Old Crescent travel to Balreask Old to renew rivalry with Navan.

The sides’ meeting at Rosbrien last weekend ended with a nail-biting 22-20 victory for the Limerick side to extend their winning start to nine games.

It took a 75th minute penalty goal from Ronan McKenna to steer Old Crescent to a dramatic victory after the home side had been reeled in by the Co Meath outfit in the second period.

Table toppers Crescent enjoy an eight-point lead over second-placed Rainey Old Boys, although the Ulster side have a game in hand.

Crescent are one of just two sides in the 50-team Ulster Bank League to have won each of their nine opening league fixtures.

In Division 2C, second-placed Thomond will look to reverse the result of their defeat to Bective Rangers in Dublin last weekend when the clubs renew rivalry at Liam Fitzgerald Park this Saturday. Bective, who played for 70 minutes of the game with 14 men after one of their front row forwards was red-carded, scored a hard fought 9-3 victory in Donnybrook.

Second-placed Thomond are 10 points clear of eighth-placed Bective in the table.

Bruff earned an exciting 17-13 win over the East Cork side last weekend to sit just one point off the promotion play-off places.

The AIL breaks until Saturday, January 6 after this weekend's fixtures.