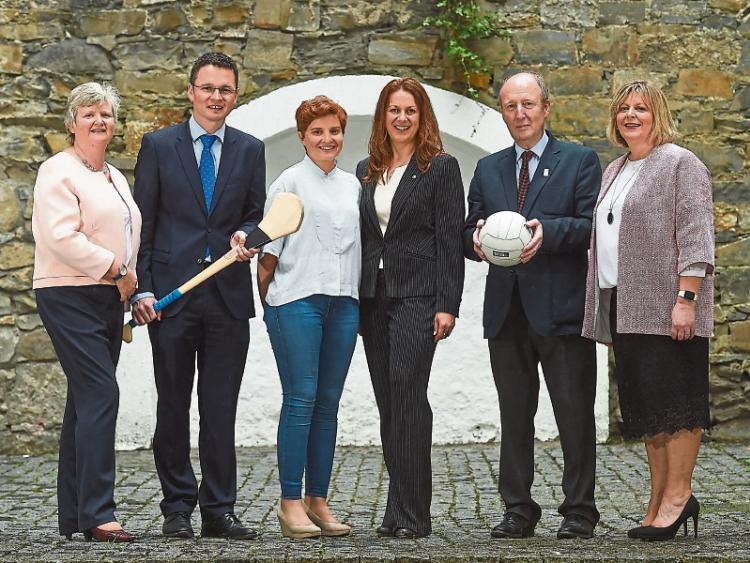 Minister Patrick O'Donovan, second from left, has been a huge figure in Grant distribution

I am not sure if Patrick O’Donovan, the TD from Newcastle West, ever played hurling or football. If he did I am sure corner forward might have been the ideal position for him.

As Minster of State at the Department of Finance O’Donovan showed a fair bit of craft and pace last week in delivering good news to many GAA clubs around the county.

The Sports Capital Programme has proved to be a great source of funds for clubs doing major developments. Limerick did well from the total pot of €56 million.

In total the GAA, across the country, secured funds of around €23.5 million. That money was shared out between 553 clubs. That works out at 42% of total funding going to GAA clubs.

Patrick O’Donovan was on the ball early and he flashed the cash to clubs right around the county. It’s worth noting that having good contact with your TD helps but if you have a Minister in the county then lets say you have a better chance of scoring goals than points.

Many clubs in Limerick did really well. Some have collected funds on a few occasions but others found out to their cost that unless the paper work is right you have little chance of getting such grants over the line.

The GAA have become really good at applying for Sports Capital Programme grants. They have learned the lessons and have applied the learning well.

How the funds were paid out by government, in times gone by, was to say the least, a little scrappy and also some clubs didn't do their business well. Some clubs were even forced to repay the funds granted.

How the application form is filled out and the level of detail enclosed is vital and some clubs have become really efficient in how they go about their business.

Na Piarsaigh have landed some major supports over the past few years. They have learned over the years how to do it well and they now have it down to a fine art.

The GAA have some great people working at club level. People with ambition and a great desire to see their club and their parish doing well. The flames of that fire have been burning since the GAA was founded and the contribution of the GAA to rural life has been enormous.

Newcastle West landed a major haul in this round of grants and that funding will greatly assist the club in further advancing their venue. That will be good for the GAA club but also good for the local town. The one thing you always want at a game is atmosphere and this has always been in steady supply in Newcastle West.

GAA clubs have raised the standards over the past ten years and it’s no surprise that when one club sets a standard others will follow. It’s a bit like parish rivalry in games. We can’t be seen to let the side down.

Centres of population with good plans and applications in most cases do well. This is why, once again, Dublin enjoyed almost €3.5 million in support to GAA clubs in the capital.

The current All Ireland club champions are Cuala and last week they launched a five year plan for the club.

The big are getting bigger and many will be left behind.

Grant support from the Sport Capital Programme makes a difference, they help to enhance the lives of many from a development point of view but the money spent nearly always stays in the community for the best part.

Hospital Handball club got €43,000. This club has played a big part in the community and it’s only right they got the support. They have consistently produced champions and it’s great to see they have ambition to further develop the club. Handball is a life long game and it also can aid the development of hurlers.

It was interesting to see that over thirty projects providing walking areas secured funding. This is a real benefit to a community, having a place that is safe, secure and with lighting has huge benefits and this way the entire community is served.

I am surprised that more GAA clubs don’t have these walking areas. I have seen a few of them fitted in around GAA pitches and this brings a lot of goodwill.

Borrisoleigh GAA club in Tipperary have one in place and the people involved their tell me that it has brought the parish closer together and it has also resulted in more financial support for the club. People are looking for ways to get outside and the clubs that do this will be the real winners in the long term.

The GAA has for decades led the way in rural Ireland but we are now seeing the formation of super clubs in some cites. They have a huge population to work with and if they are organised they have a major advantage on rural clubs struggling to make up numbers.

More and more young people are moving away from their place of birth and this will result in more of them transferring to clubs close to where they work.

I spoke recently to a player that travelled from Dublin to Limerick to train with his club but he told me he will not be able to do this going forward. The challenge going forward for rural clubs will be substantial and in the very near future we will see more clubs having to join forces to survive.

The provision of good facilities plays a part in keeping people local and in that regard many GAA clubs in Limerick have shown great leadership. Facilities are only one part of a club but it’s vital that those clubs don’t allow their focus shift from their primary goal of producing young players and bringing them to adult level.

Grants are only one part of development by clubs. The rest of the monies must be raised locally and to that end clubs go to great lengths to see their plans become a reality.

For as long as we have people with ambition working in GAA clubs it’s safe to say the games will always play a part in the lives of the young and the old.