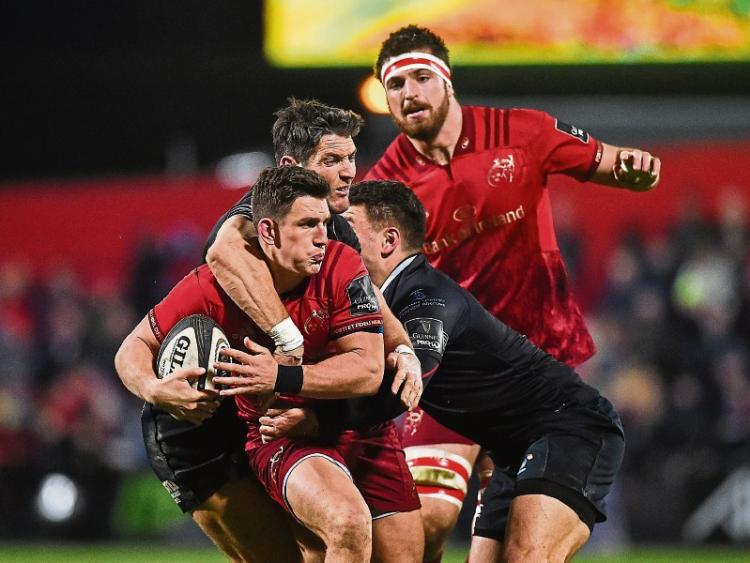 JOHANN van Graan’s first home fixture in charge of Munster ended in a 36-10 thumping of a struggling Ospreys side in their Guinness Pro14 fixture at a sold-out Musgrave Park on Saturday evening.

Munster completed a home-and-away double over the Welsh region this season, running in five tries in all, to send the capacity attendance of 8,008 on Leeside home happy before thoughts turn to Europe.

Just how beneficial this runaway victory over an Ospreys side – which suffered a record 41-point home defeat to Glasgow in their previous outing six days earlier is – will only become apparent in their mammoth back-to-back European Champions Cup pool fixtures with Leicester Tigers.

Munster host the Tigers in the first of those fixtures on Saturday next, December 9 at Thomond Park, 7.45pm

Munster also picked up another unfortunate injury to their growing list when talented young prop Liam O’Connor was stretchered off in the third quarter.

While Munster will be pleased by the clinical manner in which they finished their tries, they will, once again, be concerned with their discipline as the home side coughed up 13 penalties and also picked up a yellow card.

It should also be remembered that the Ospreys were forced to field a somewhat depleted side due to the clash with Wales' final autumn international against South Africa as well as injuries to a number of key players.

Munster took the lead in the fifth minute with a penalty goal from Ian Keatley.

The complexion of the game changed in the 17th minute when Ospreys flanker Will Jones was sin-binned for a high tackle on fellow back-row Chris Cloete.

Munster made the one-man advantage pay almost immediately as centre Sam Arnold scampered over for a well worked try. Keatley’s conversion made it 10-0.

With injuries to both Jaco Taute and Chris Farrell, Arnold is now in the box seat to start in Munster’s midfield for the big back-to-back Champions Cup pool fixtures with Leicester Tigers over the next two weekends.

Again Keatley was on target with the conversion and suddenly’s Munster’s lead was a gaping one at 17-0.

Munster, who had lost only one of last seven fixtures with the Ospreys, increased their advantage in the 29th minute when the rampaging Cloete powered over. Keatley conversion made it 24-0.

The Ospreys finally opened their account in the 39th minute when winger Jeff Hassler touched down following a good move up the left hand touchline to leave Munster 24-5 in front at the break.

The home side, who had lost only once at home in the Pro14 since September 2016, grabbed a bonus point try within three minutes of the restart when the home side tore the Ospreys defence to shreds once more and centre Rory Scannell touched down.

Keatley’s conversion made it 31-5 to the home side. Game over.

But the home side wasn’t done yet and highly influential back-rower Jack O’Donoghue bagged a fifth try for Munster after 56 minutes for a gaping 36-5 lead.

The home side replaced their impressive out-half Ian Keatley soon after with his fellow Young Munster clubman Calvin Nash getting another chance to impress following his try-scoring exploits in Parma six days earlier.

After try scorer O’Donoghue was sin-binned for Munster, the Ospreys took advantage with flanker Will Jones dotting down after the visitors were awarded a series of penalties deep inside the ‘22.