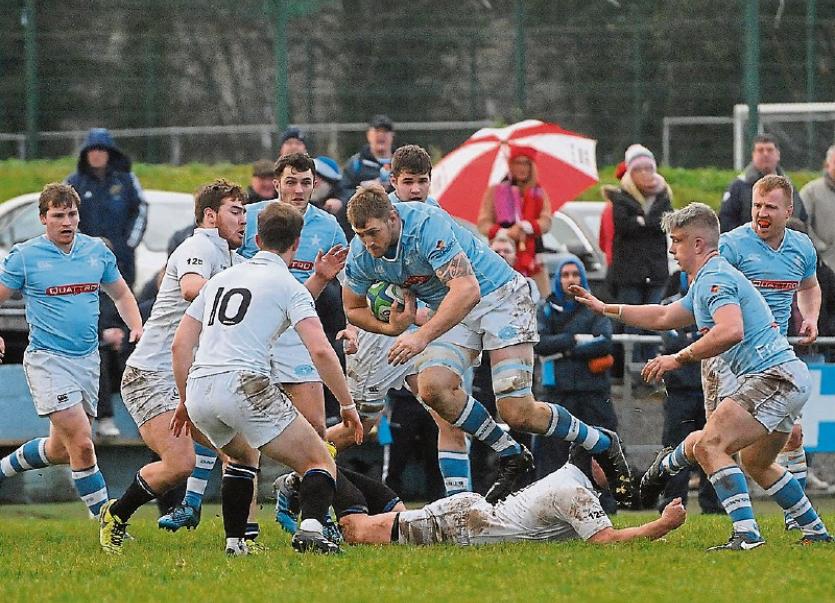 THERE was just one Limerick win in the two two Divisions of the Ulser Bank League and three local successes overall as the AIL reached the half-way stage on Saturday.

Saturday’s fixtures were the first of back-to-back games between the clubs with the return games taking place on Saturday next, December 9.

Fourteen points from Neil Cronin set up Garryowen for a well deserved 24-17 win over Cork Con at Dooradoyle, in the first of three clashes between these two sides in the coming 21 days.

Despite the win, Garryowen were overtaken by Terenure in the top flight table and now sit in third place in 1A.

Cronin crossed for a try in the opening half, which he converted himself, helping his side to a 10-6 short whistle lead. When Liam Coombes scored a try after 48 minutes, it looked as if Conan Doyle's side would have it all their own way.

However, Cork Con, the current AIL champions, replied with two penalties from Mossie Quinlan to close the gap to 17-12 after 66.

The home side responded in the 70th minute, as Dave Johnston crossed under the posts at the end of a brilliant team move. When Cronin converted, the score read 24-12.

The champions were not to leave empty handed though, as substitute Jason Higgins crossed from a back row move off of a 5 metre scrum in injury time .

The sides meet again next Saturday in Cork, with a Munster Senior Cup semi final to come the week after in Dooradoyle.

With Munster in B and I cup action next weekend also, both sides could expect to be mush changed for the top four clash.

Also in Division 1A, Young Munster fell to a disappointing 32-13 reverse at the hands of Terenure College at Lekelands.

The defeat leaves Munsters’ seventh in the table with three wins from their opening nine fixtures.

Munsters' travelled to Lakelands on the back of two successive defeats against Garryowen and Clontarf.

Young Munster trailed 3-10 at half-time. However, the Limerick side drew level at the start of the second half when awarded a penalty try.

Indeed, Munsters’ built a 13-10 lead into the second half. However, the home side hit back with three tries in the second period to to ease home by 19 points.

Meanwhile, in Division 1B, table toppers Shannon were thumped 42-15 away to Ballynahinch.

The Parish side, who had only lost one of their seven games prior to kick-off, conceded six tries in all on a disappointing day.

Richie Mullane kicked the Shannon penalty after 10 minutes, while Keith Kavanagh sniped over for a well-taken try off a scrum in the 32nd minute.

The concession of a third converted try to Hinch five minute into the second half knocked the stuffing out of Shannon who conceded further tries in the 49th and 50th minutes to trail 35-8 with half an hour to play.

Shannon notched a second try on 71 minutes when, off the back of a scrum, Aaron Hehir made a smashing break before dotting down. Keith Kavanagh converted for 35-15.

The home side added a further try before full-time to ease to a 27-point victory.

Also in 1B, UL-Bohemian had to make-do with taking a losing bonus point from a 22-15 defeat to fellow students UCC on the 4G pitch at UL.

Tries from Ian Condell and Daragh O'Grady, one of which was converted by Robbie Bourke, had UL-Bohs 12 -3 ahead in the first half.

However, the concession of two tries to UCC just before the break had the Leeside students 17-12 in front at the break.

While UL-Bohs managed a further penalty, a further UCC try ensured victory for the visitors.

In Division 2B, Old Crescent kept up their 100% start to the season, recording a ninth successive victory, with a hard fought 22-20 win over Navan at Rosbrien.

Old Crescent made the ideal start with two tries from Brian Tuohy, both of which were converted by Ronan McKenna had the home side 14-0 up after 25 minutes.

Crescent maintained a 14-6 lead at half-time and the home side managed a third try from Val McDermott, created by McKenna, saw them increase their advantage to 19-6.

Howewer, Crescent were stunned by the concession of two converted tries, to trail 19-20 some 15 minutes into the second half.

The resilient home side had the final say, however, when the dependable McKenna kicked what turned out to be the winning penalty goal on 75 minutes.

In Division 2C, Thomond remain in second place in the table, five points behind pacesetters Sligo after suffering a 9-3 defeat to Bective Rangers.

Bective were forced to play 74 minutes of the game with just 14 players after their hooker was red-carded as early as the sixth minute.

Thomond and Bective Rangers turned over scoreless, 0-0, at half-time on the 4G pitch in Donnybrook.

However, two further penalty goals helped the 14-man home side seal a 9-3 victory as Thomond were simply unable to convert pressure into points.

Also in 2C, Bruff recorded a precious 17-13 victory over Midleton at Kilballyowen Park to jump up to fifth place in the table.

Midleton did manage to reduce the advantage to four points with a late penalty goal, but the Limerick side held on to record a precious victory.