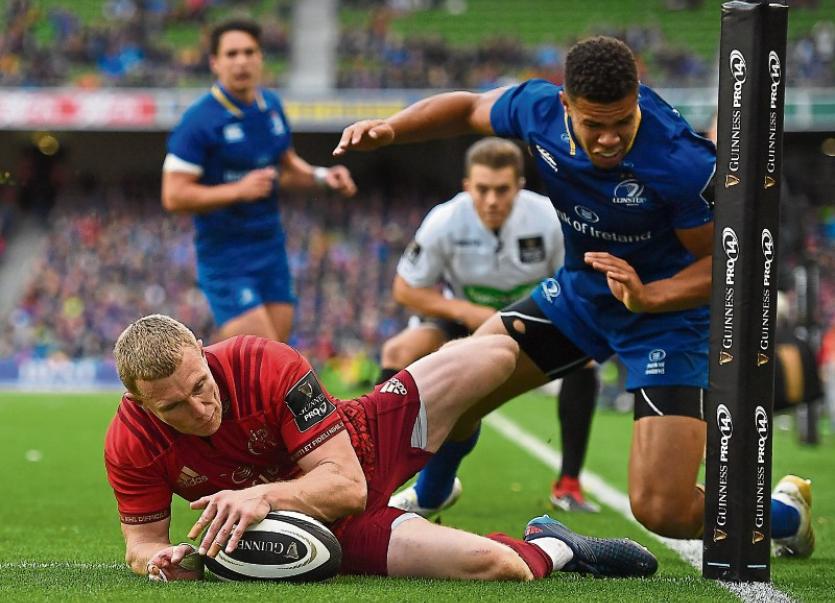 Munster's Keith Earls, pictured here scoring against Leinster, will be sidelined for a number of weeks with a hamstring injury

Earls is continuing to rehab the hamstring injury he sustained while in camp with Ireland for the on-going autumn internationals. The Limerickman is ‘expected to be out for a number of weeks’, according to Munster.

Prop Cronin is rehabbing a calf muscle tear sustained while in action for the Barbarians earlier this month with the province revealing that he is ‘expected to return next month.’

Munster are due to face Leicester Tigers in the first of their back-to-back Champions Cup fixtures on Saturday, December 9 at Thomond Park, 7.45pm.

New Munster head coach Johann van Graan joined the province this week ahead of his first game in charge.

The squad started their preparations for Sunday’s Guinness PRO14 fixture with Zebre in Italy on Sunday (1.30pm Irish time) on their return to training last Wednesday.

Winger Ronan O’Mahony returned to on-field training last week as he continues his return from a fractured fibula injury.

Munster indicate that scrum-half Duncan Williams has a shoulder niggle and Tyler Bleyendaal’s neck injury is progressing well, but the duo will both miss the weekend’s game in Parma.

Tommy O’Donnell (shoulder) will also miss the Zebre clash although he is reported to be progressing well with his rehab from an AC joint injury sustained in Ireland camp.