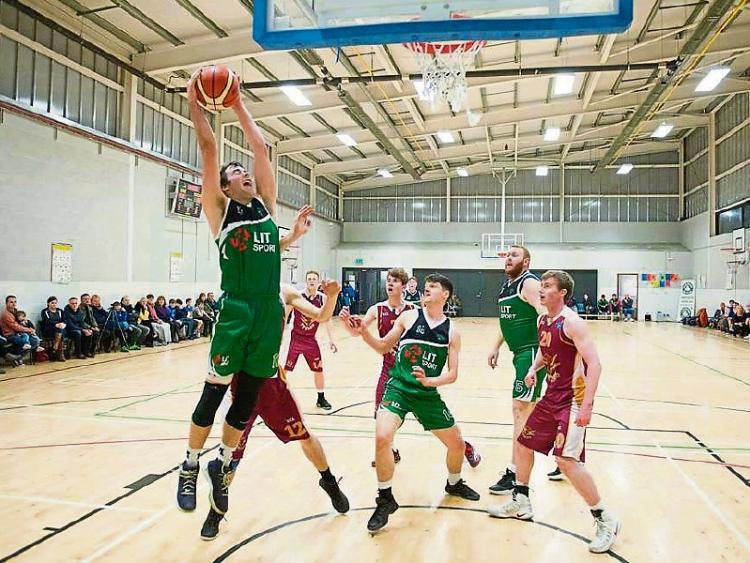 IT was a mixed bag for LIT Celtics last weekend as they won one game and lost another in the Mens Division One basketball leage.

LIT Celtics had a good win over Galway Titans on Saturday night in St Munchin's College.

A large crowd turned up to cheer on the Limerick Mens team and were treated to a great evening of fast and skilful basketball.

From the tip off, LIT Celtics were firing on all cylinders with Jordan Hehir and Tommy Walsh accounting for the opening 12 points.

Celtics were working hard on both ends of the floor and the workrate was definitely paying off on the night with the Limerick men growing in confidence and extending their first quarter lead to 14 points.

Double men's player of the month, Matt St Armour, was once again causing havoc for the Galway side and with Cian O’ Reilly, Emmett Brown and Ciaran Woods knocking in open scores the Limerick side finished the half on a 52 to 32 scoreline.

Conor Byrne, Aidan Holden, Dylan O’Dwyer and John Bridges added some more fine scores in the third quarter to extend the Limerick lead to 30 points and with Jordan Hehir, Tommy Walsh and Matt St Armour scoring inside an outside the arch, the LIT Celtics finished off a fine display with a 94 to 67 win.

The following night, the LIT Celtics went to Ballincollig to take on their Munster rivals.

The Cork side have only lost one game this season and showed on the night why they are second in the table to unbeaten Neptune.

Next up for the Celtics is an away tie on December 9 against Paris Texas Kilkenny.

Meanwhile n the Women's Division One league, UL Huskies defeated Meteor 69-65 to go to 3-2 record from their opening five games.

Rachel Sheehan once more starred for the UL side with 36 points, while Orlaith Woods and Abbie Jeffrey both scored 10 each.

The Huskies now sit in fourth spot on the table just three points off of first spot currently occupied by Fr Matthew's of Cork who remain unbeaten.