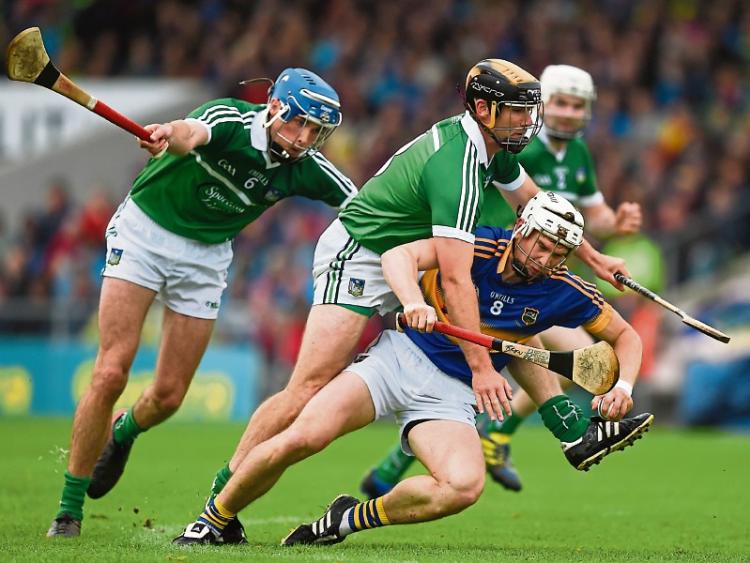 James Ryan and Gavin O'Mahony in action for Limerick

Two players that have served Limerick hurling well decided to call time on their careers last week. Gavin O’Mahony and James Ryan, within days of each other, made the announcement that their time was up.

It’s never easy to come off the inter county wheel, because for the best part, players are in a bubble. It becomes a way of life. At first, getting on the panel is what it’s all about and then over time the apprenticeship is learned and if good enough opportunity will follow.

Both of these players first came to the stage at minor level in 2005. The Timmy O’Connor managed team did well to reach the All Ireland minor final. They lost the final but it provided a foundation for many players that would serve Limerick in the years ahead at senior level. Both O’Mahony and Ryan leave the stage after what they will accept was a poor year for Limerick.

The duo didn’t really figure like they had done in other years and they looked frustrated players when Limerick ended their championship run against Kilkenny in Nolan Park. Some expected more change by the new management in late 2016 and also in early 2017 but they decided not to make such calls. In hindsight I think both players will regret not leaving last year but the hope of making progress for one last time kept them going.

Limerick have a strong player base and the management will be under pressure to make progress in 2018. To that end we could see a couple of other players calling time. Limerick will have to show serious intent and holding off on giving youth its opportunity will not go down well.

The question is do you stick with what you have for a last gasp year or allow some younger players that will give you at least ten years. That is the question the Limerick management must answer but maybe they have already.

Limerick have gaps to fill and players like Eoghan McNamara look set to advance in 2018. McNamara is a fine young goal keeper that has done really well at minor and U21 level. Limerick have leaked goals over the past couple of years in this regard the Doon man is a proven shot stopper but he also has great vision in the puck out. We can expect him and some others to come to the fore next year.

Playing on a county team now is very consuming and for a while James Ryan and Gavin O’Mahony will not know what to do with themselves.

Making the journey for training, matches, team meetings and more was a way of life for them. They knew nothing else and it will take them a while to adjust to a new way of life.

Talk to any player that has called time on his career and they tell how difficult they found the weeks, months and indeed the first year after walking away.

The body and mind are conditioned over years in the pursuit of winning an All Ireland title and sadly like so many others before them both James Ryan and Gavin O’ Mahony leave the stage with many memories and a Munster championship medal for 2013.

For such effort it doesn't seem fair but over time they will reflect more on the friends they made than the games they lost.

James Ryan will be remembered as a player that always put his heart and soul into every game that he played in either hurling or football for Limerick.

He may not have had the finesse of others but when it came to heart, passion and work rate few players of any generation would match the Garryspillane man.

He was an honest player that always battled to the end. For club and county he had many good days, much of the work he did often went unnoticed and at his best he tamed some outstanding players.

When you needed a man to drop the shoulder or take one for the team invariably it was Ryan that came to the fore.

He had great days with his club and it takes a fair player to win man of the match in a county senior final. He was still a minor but on that special day for his club he left a mark.

Jim Dooley the Chairman of the Garryspillane said James Ryan owes little to club or county, “He was a massive player for us and he played a major part in the progress we enjoyed at senior level. I can remember many days when we were struggling badly and James would cover every part of the pitch. He served many teams both in hurling and football but he always showed great loyalty to this club.”

Gavin O’Mahony was a defender and enjoyed his best days for Limerick in the half backline.

He was pushed into the forwards but that experiment never worked. In fact I would say it saw the decline in his game. I don’t think he enjoyed the last couple of years and it was no surprise that he choose now to hang up his hurley with Limerick.

Hurling was in the blood and from a Kilmallock point of view he collected silverware at every level. He also collected club honours in Munster and played in an All Ireland club final.

Playing at the highest level is now very demanding and while the honour of playing for your county is still the dream of every young player, we are now starting to see that many players are rightly paying more attention to their professional careers. I don’t think we have seen the last of Gavin O’Mahony and James Ryan at club level and I wish them well in that.

Eighty three years is a long time to wait for a junior hurling title but finally St Patricks ended the famine last weekend. They will remember this win for years to come. It took three games to secure a winner in this years Limerick final. For St Patricks this win was reward for much work this year but also the great work done over many years.

Those people that have worked so hard with underage teams will enjoy this win. As a club St Patricks has produced some great players over the years and this win may well inspire others in the future.

They have a strong player base but competition from other sports has often made life difficult for the club. They have endured some heart breaking defeats over the years and finally they had a day of great joy last weekend.

Only a week previously they lost to the Waterford champions in the Munster club first round. It took them a while to gain success and I am sure they will take time to enjoy this superb win.

Adare did well to win this years senior football final but that win was somewhat overshadowed last Sunday when they went down to Nemo Rangers of Cork. This was a game they will want to forget and it shows once again the ground Adare and others have to make up to match teams from Kerry and Cork.

The gap between the teams was substantial as far as football quality was concerned and those young Adare players will have seen first hand the standard needed to battle at this level. They have made good progress, they have some fine young players but they left Mallow with lots of lessons for next year.