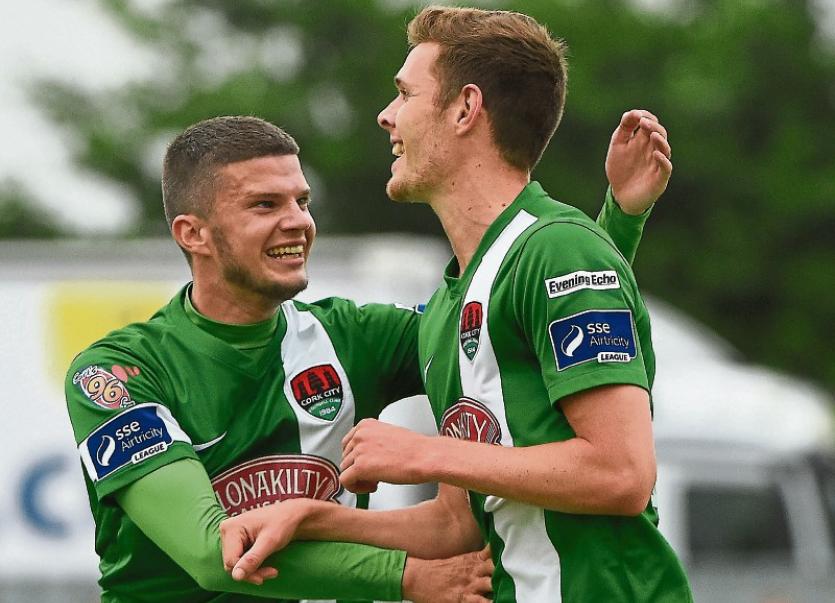 Danny Morrissey, left, who has signed for Limerick FC for 2018, celebrates a goal with Cork City team mate Garry Buckley

LIMERICK FC have confirmed the signing of striker Danny Morrissey who spent the past season at Finn Harps.

Twenty three-year-old forward Morrissey was previously at his hometown club Cork City where he made over 60 Premier Division appearances, while playing the leading role in sealing their 2015 FAI Cup final place.

On his latest recruit – which adds to the signature of midfielder Cian Coleman – Limerick FC manager Neil McDonald said: “Danny played against us and scored against us in two games. He hadn’t got the best of fortune at Finn Harps, but he is a goalscorer and that is what we are looking to sign.

“We are happy to have Danny on board. We will be looking to get him fitter than he was, we know he can score goals, and hopefully he will be able to put away the chances that we create.”

Having made his senior debut at First Division level as a 16-year-old in 2010, Morrissey played a part in Cork's title success and promotion 12 months later. His most prolific period to date came in his second top-flight campaign in 2013 when he netted nine goals from 23 league outings.

Injury hampered his progress the following year and – while he made 34 league appearances over the subsequent two seasons, gained UEFA Europa League experience, scored the 2015 FAI Cup semi-final winner and played in the decider – he was unable to nail down a regular place, with Seán Maguire for competition in his last season on Leeside.

Danny moved to Finn Harps for 2017 and started 15 times in a total of 21 league appearances, with a return of five goals, including strikes in both wins over Limerick, at Finn Park in May and at the Markets Field in September.