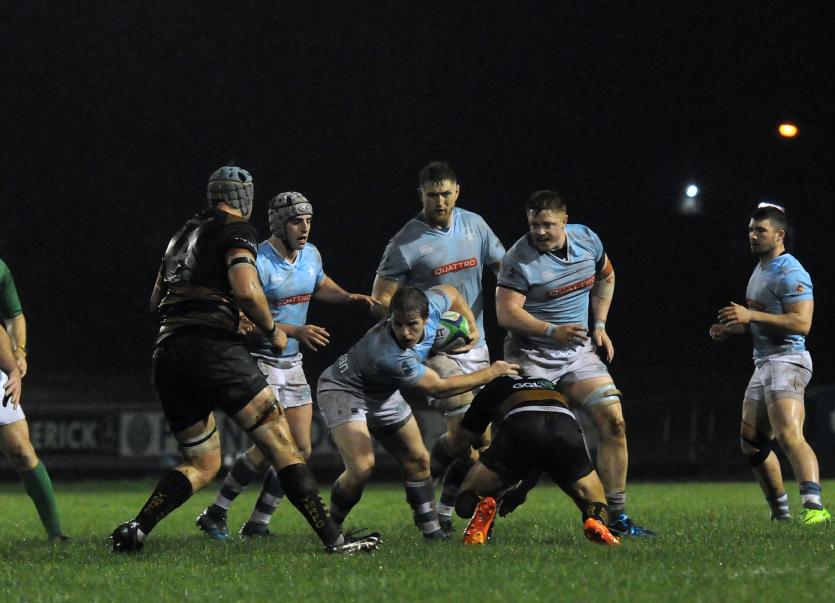 Six points from the boot of Neil Cronin secured all four points in tonight's 6-3 win over Young Munsters in the Ulster Bank League Division 1A clash at Dooradoyle.

The scrum half, who was 2/4 from the tee, kicked his side to their fourth win of the season from their opening seven games, while committing Munsters to their fourth defeat of the campaign. The win puts the men from Dooradoyle in third spot in the table, (Cork Con to play tomorrow) while Young Munsters are third from the bottom, yet only four points off of the play off spots.

The game, played in monsoon conditions, is the third win for Garryowen this season over their near rivals. The wins in the Charity Cup and Munster Senior cup were added to this evening by means of a better tactical kicking game from Garryowen's half back pairing of Cronin and Jamie Gavin.

The visitors opened the game better than the hosts and they went in front after just 5 minutes when Alan Tynan slotted a kick following a dominant Young Munster scrum.

With the game being played between both 22's for large portions of the 80 mins, any small errors were going to be punished with points and that is exactly what happened when Neil Cronin levelled the score after 18 minutes when his side's pressure in the opposition 22 told and they were awarded a kickable penalty for offside.

The last score of the half and indeed the game, came in the 28th minute when Young Munster were adjudged to have brought down a maul. Cronin was on hand once more to slot the points in what turned out to be the winning score.

The second half was a hard fought affair with tempers flaring on more than one occasion. Referee Kieran Barry kept his cards in his pocket, however both sets of supporters were puzzled by some of his scrum penalty calls at times.

Both Alan Tynan and Neil Cronin missed kicks at goal in the second half, however both can be forgiven for same on a night that was too wet for ducks.

The second half was indeed scoreless, however Young Munsters' had the better of the chances. Calvin Nash was almost away following an excellent break by James O'Connor, however a covering tackle from David McCarthy saved the day for Conan Doyle's side.

Next up for Garryowen is a trip to College Park in Dublin to face Trinity on November 25,while Young Munsters host Clontarf at Tom Clifford on the same afternoon.

Best for Garryowen on the night were Neil Cronin, Niall Horan, Dean Moore and Jamie Gavin.