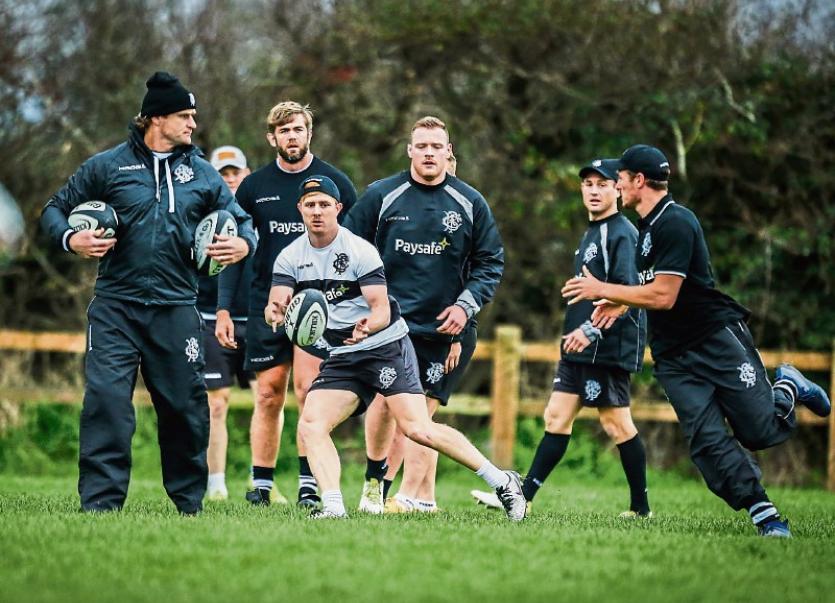 MUNSTER prop James Cronin is looking forward to teaming up with Donncha O’Callaghan once more in the Barbarians side which takes on Tonga at Thomond Park, 7.30pm.

Cronin is one of two Munster players included in the Baa-Baas squad for the international fixture along with fellow front-rower Brian Scott.

The Munster duo are joined in Robbie Deans’ Baa-Baas squad by former Munster and Ireland second-row Donncha O’Callaghan who flies in for the game from Sierra Leone where he has been with UNICEF.

James Cronin said: “I never thought I’d get to play with Donners again, that is great, I’d be actually very close to him so it’s great to link up with him again.

”He’s with UNICEF in Africa, in fairness he’s a great guy and I couldn’t talk highly enough about him as a professional and as a fella – he’s top of the pops”.

“It’s a massive honour to play for the Barbarians and an opportunity to play with some of the game’s greatest.  You grow up and see those great teams and tries from the 1970s.

”Obviously I wasn’t born in 1973 but I know all about Gareth Edwards famous try in Cardiff.  The brand of rugby associated with the Barbarians shows the way rugby can be players, throwing it around and score those  fantastic tries like they did on Saturday.

”Imagination I suppose is the main ingredient.  It’s one of those things, if the opportunity arises, you want to grab it with both hands and I feel very fortunate to be invited.

“I actually was invited towards the end of last season, but picked up an injury so now it has gone full circle that I am coming back from injury and I’m getting the chance after Ben Franks pulled out.

”I had this week off (with Munster) but I didn’t want to go gallivanting, as I said I’m just coming back from injury and just want to get my body right.

”There are big games coming up with Munster and I want to put myself in the best possible position there.  Getting game time this week is all part of the recovery.”

Cronin is excited to be back fully fit again having been sidelined with a knee injury.

“The latest injury was the knee, a cartilage that I had complications with.  I was out for six weeks then picked up another knee injury in my first week back.

“You name it, I’ve had the bad luck with the injuries but there’s a more positive outlook now, back on the pitch and looking forward to Friday night.”

On the Munster front, Cronin heaped praise on the contribution departing Director of Rugby, Rassie Erasmus and defence coach Jacques Nienaber played during their time with the province.

The duo are returning to their native South Africa to take up roles with the Rugby Union there.

“Look back eighteen months, we were probably struggling and the lads have had a massive role in turning things around a bit,” James Cronin said.

”We are in a good position in Europe and second in our conference in the Pro 14, so they have had a massively positively influence on us and are going to be sorely missed.

”I’ve chatted to a few South African lads here with the Barbarians and everybody speaks very highly of Johann (van Graan).

We want to put trophies in the cabinet, it’s a big year, it’s going to be a big six to eight weeks.”

An action-packed programme of rugby at Thomond Park on Friday kicks-off at 4.45pm with the meeting of the Munster Womens’ team and the Barbarians side in an historic fixture.

The Women’s Barbarians team will take to the field for the first time when they face Munster Women on Friday.

Former Ireland captain Fiona Coghlan is among those already confirmed for the Women’s Barbarians.

Munster head coach Laura Guest said: “It gives us the chance to play opposition that we don’t know anything about as a team, we know plenty about the individuals but it gives us a great opportunity to play a team unfamiliar to us.

“I hope that the girls really enjoy it first and foremost because it’s a history-making opportunity and it’s something that might never come around again – the chance to play a Barbarians side in the home of Munster Rugby.

“Obviously when you play well you enjoy it even more but it’s a great opportunity for all of us to be involved in. Credit must go to Amanda Greensmith [Munster Rugby Women’s Community Rugby Officer] for all her hard work in getting this fixture right.”

The Barbarians have named a 23-strong squad with 1,019 international caps between them as seven different nations will be represented by the side.

Tickets are available for Friday night’s game between the Barbarians and Tonga from €15 for adults, €10 for juniors and also includes the Munster Women’s match with the Barbarians at 4.45pm.