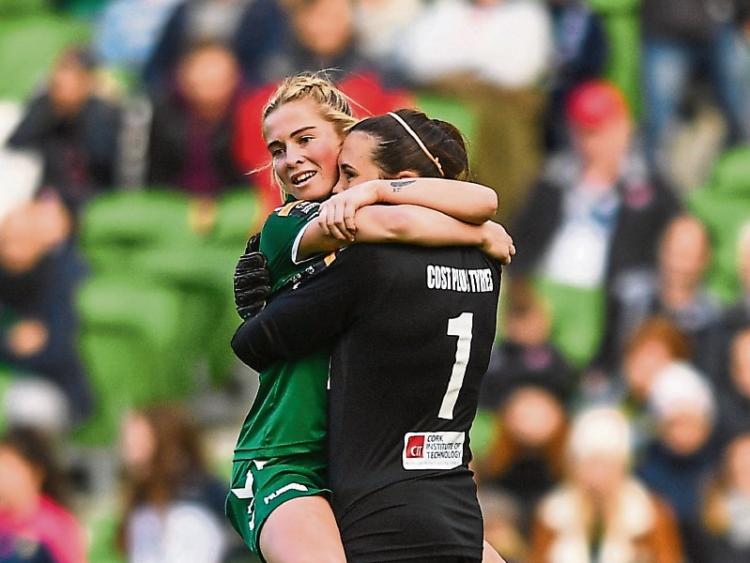 Twenty seven-year-old Sheehy, from Moyross, has been a key player for the Leesiders this season in their march to an historic FAI Cup final success.

An exquisite 34th minute winner from Irish international Clare Shine helped Cork claim the spoils in a final which was watched by 24,000 spectators as well as a vast TV audience as the game was shown live on RTE as the first half of a double header with the men’s FAI Cup final.

The talented Sheehy, who can play as a striker or right winger said she has been inundated with messages of congratulations since Sunday’s final at Lansdowne Road.

A delighted Danielle Sheehy said: "My Facebook page has blown up with all the congratulations I have received from people since Sunday's final, messages from people in Limerick.

"People have been putting up pictures from the TV from the game. It is great. Moyross is such a good place. Everyone supports you. Everyone gives you a message and says 'well done, fair play to you.' They will always give you something positive.”

Sheehy’s career in soccer has come a long way since she started kicking a ball around in ‘Bobby’s Field’ in Moyross.

"I started playing from a very young age, probably six or seven, with all the boys on the field, ‘Bobby's Field’, in Moyross.

”I went out to an FAI Summer camp when I was younger and from there I started playing with Aisling Annacotty and have played with them.

"I was always mad into soccer and I think it helped that I played with the boys growing up because it made me that bit tougher and stronger.

"I played Gaynor Cup from U-14 the whole way up to U-18. I played with Munster Schools and the Munster U-18 provincial team. When I was 15 I was in with the Annacotty senior squad.”

Danielle moved abroad to pursue a scholarship in the United States in 2012 where she played for Hutchinson Community College in Kansas.

During her time in the States, Danielle won a number of awards and was scouted to play semi-professional in the Women’s Professional League (WPS) for the Gulf Coast Texans of Florida.

"I got a scholarship to America in 2012. A scout from Florida came over to watch one of my friends Nicole Cronin, (Irish women's rugby international) playing a game in Shannon.

”I didn't know he was there, but I scored a hat-trick in the game. He contacted me afterwards about a scholarship to St Leo University in Florida.

”That didn't happen, but Nicole was playing in Hutchinson Community College in Kansas and her coach got on to me. I actually got to do that experience with her even though she was there a semester before me.

"I played in Kansas for one semester and we got to the region semi-finals of the Championship.

"That was 2012. From there I went and played semi-professional with one of my team mates Mel from Hutch. We had broken a few records and I played with the Gulf Coast Texans down there.

"It was a terrific experience. One of the girls played with the USA women's side, with the Washington Spirit side. The standard was something else. I improved a lot as a player. The experience of the whole thing was unreal.

"It is a summer league over there and I played semi-pro for a summer. It was 2013. There was an option to stay on, I had offers from other places.”

One of the offers came from a fully professional team in Iceland and Danielle jumped at the opportunity.

"I moved from Florida to play in the professional Pepsi Cola League in Iceland then. Afturelding FC was the team. A guy contact me from the club. There were two other American girls already there. I played there for a while.

"I was doing a bit of travelling. It was near Reykjavik. They play summer league as well, but when they got on to me I was in the middle of finishing my own league in Florida. I was late going into it. I got there in August.

"I only played two or three months. I had an option to go back the following season, but the place was small. There weren't too many English speakers and I kinda missed home when I was there.

"The standard over there was very high. There were some quality players, some from the USA.”

The Limerick woman opted to return to Ireland and joined Raheny United.

"I went to Raheny. I played there with Catherine Cronin one of my childhood friends. We played football from the time we were eight.

“We were on the bench for an FAI Cup final with Raheny and we were marking each other in Sunday's FAI Cup final in the Aviva. She is with UCD Waves now.

"I played with Raheny for one season. I got called into their Champions League squad. I had been there for a month or two at that stage.

"We went to Romania for the qualifiers for the Champions League which we came through beating Hibernians. Bristol Academy beat us and they went on to beat Barcelona.

"I joined Cork from there. I fitted in with the girls and got on great. This is my first season with Cork. We have come a long way as a team to be fair now.”

When Cork’s chances of winning the league title passed, the Leesiders set their sights on winning the FAI Cup.

“We had 'Road to Aviva' in our heads. We were all really ready to work hard.

"It was great, the size of the stadium, the amount of people that were coming in. It was a bit nerve wrecking.

"It was a tough battle, but we always knew it was going to be. We never beat UCD in the league. A 1-0 win did it for us.

“​It wasn't the greatest game, but Claire Shine got a fantastic goal which was the winner.”