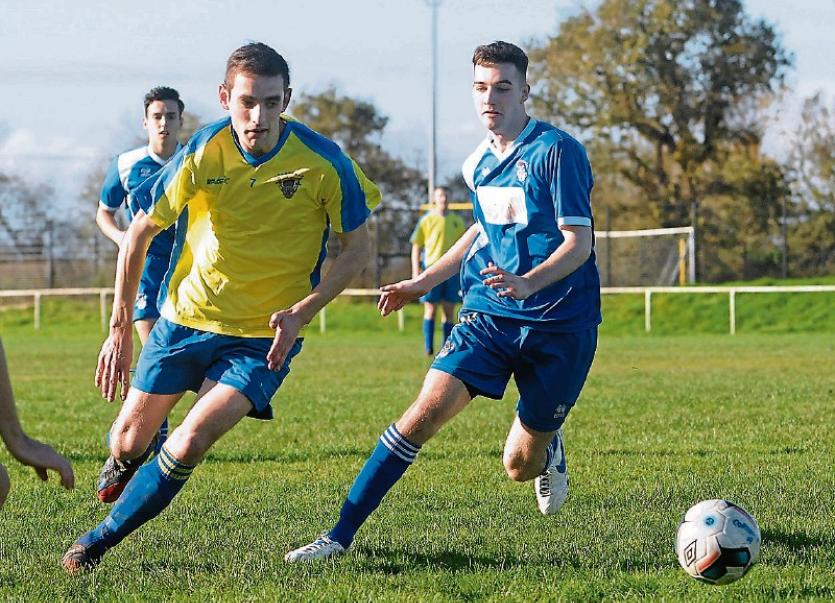 The FAI Junior Cup is down to the serious stage with the winners of Sunday's scheduled ties going forward to represent the Limerick District League in the Open stage of the draw.

There is no doubt which tie is attracting most attention. Janesboro and Ballynanty Rvs get ready for round four as their game on Sunday will be the fourth time the sides have met in the ten weeks.

Thomas Clarke's headed goal separated the sides in August in Shelbourne Park. The sides met a month later in Jackman Park in the Munster Junior Cup when goals from Shane Clarke and Keith Mawdsley gave 'Boro a 2-1 win.

In mid October, the sides met again in the Tuohy Cup in Jackman Park and after a thrilling game, Joel Coustrain's extra time winner saw Balla get some revenge.

Balla had no game last weekend, their last outing was a 1-1 draw with Regional. The Blues were far from their best on that occasion and will be aware a big improvement is needed for this weekend.

It's a shame one of these sides will exit the competition at this early stage but it makes great viewing for the neutral.

Another all Premier tie is Regional Utd v Nenagh at Dooradoyle.

Regional Utd have been a revelation this season and only last Sunday lost their unbeaten league run in a 2-1 defeat to Pike Rvs.

They will be looking for a return to winning ways against a Nenagh side going through a rough time of late.

The Tipperary side, who went so close to snatching the League title last season, have won just once in their last six outings.

Regional would be well advised to treat the game with trepidation as the visitors with a full compliment to pick from will prove a different proposition.

The County side lie third in a competitive Division 1B and have lost once in eight games. They will relish a chance to lower the mighty Pike Rvs but may find it a bridge too far.

The form of Gary Neville, Pat Mullins and Co., suggests Pike will make it through.

Premier side Holycross go into the tie with Shelbourne following a Munster Junior Cup defeat to Division 1A side Cappamore. Shelbourne, plying their trade in Division 1B have already shown they are capable of causing an upset and with the County side's confidence at an all time low, anything is possible.

The final game in the FAI is a clash between two Division 1B sides, St. Patricks and Hill Celtic.

The sides met already in the League when Celtic ran up a 7-2 win. After a good start to the season in which they won two and drew one, Saints League record since is six defeats and one draw.

Celtic have shown better form all through the campaign but the cup can do funny things and they should be on their guard.

The second round of the Munster Youth Cup continues this weekend with the tie of the round being Pike v ,Mungret. The sides met last Sunday in the FAI when Pike edged a five goal game. The Winners will play the winners of Corbally Utd v Shelbourne also scheduled for Sunday.

With the top two not in action in Galtee Fuels Div 1A League, Summerville have the chance to move into second spot if they can win at Corbally Utd.

Division 1B leaders Coonagh face a sticky tie against old rivals and neighbours Caherdavin. Athlunkard Villa will take over second spot if they win at Croom.

In the All Tan Sunbed Div 3B League, leaders Kilmallock will take on neighbours Castle Utd and Division 4 leaders Coonagh Utd B take on club mates in the C team.