Rassie Erasmus: 'Axel's death was life-changing for me' 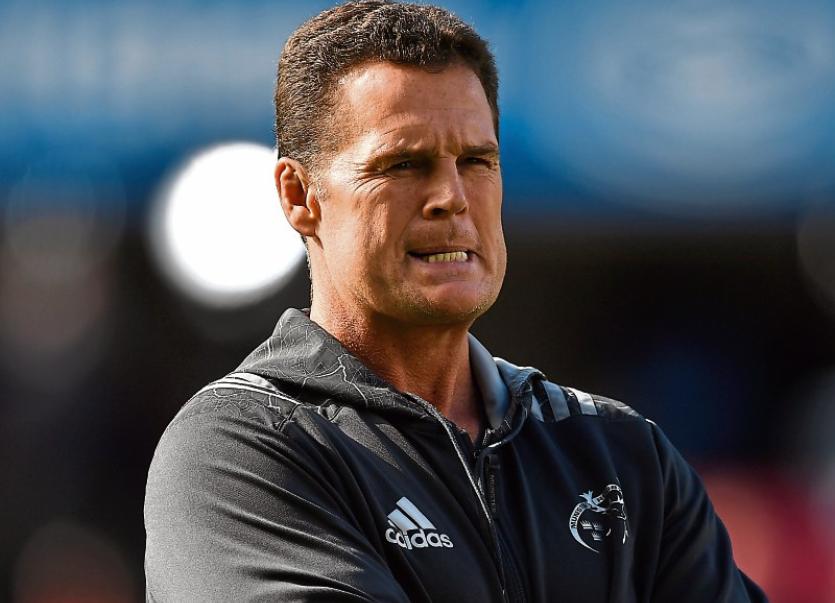 MUNSTER Director of Rugby, Rassie Erasmus is set to take charge of the province for a final time in Friday night’s Guinness PRO14 clash with Dragons at Musgrave Park.

South African Van Graan is expected to be in charge of Munster’s first fixture after that break, the Sunday. November 26 meeting with Zebre in Italy.

Erasmus, who took Munster to a Pro12 final and a Champions Cup semi-final last season said: “It probably is (my last game in charge). We are definitely not going home on Saturday, but with the three-week break and with the timing, barring work permit and those things, I think it might be and probably is.

“Myself and Johann (van Graan) have been in contact since it has been announced and he was here for a week. We have been exchanging emails and telephone calls.

”I know him pretty well. It won’t be a case that I will be totally off the radar when I am leaving. He is coming next week, probably with the Springboks for the Ireland game. We will try and have a chat then, depending on his needs and how quickly he gets the grasp of everything.

“There is a good chance that I will still be here while he is here as well.”

Asked to nominate his highest and lowest points during his time at Munster, Erasmus said: “Axel’s (Anthony Foley's) death was the saddest, without a doubt the saddest. The week or two or three weeks I felt the most sorry for myself, selfishly. I thought that was something to handle.

“But then again it was one of the times where I learned the most about myself, other people and about other cultures. I wouldn’t say it was a low. It was sad but it was a life changing experience for me in a lot of things I am doing as a coach.

“I was supposed to be director of rugby and I certainly adjusted a lot of my thinking and things while that happened. That wasn’t a low, it was a sad time.

“The highs? There were some games we scrapped through in the dying minutes against Ulster, drop-goals by Rory Scannell. Probably getting to semi-final against Saracens. I just felt, Munster belong in the play-off places and not just quarter-finals, getting to semi-finals and hopefully winning trophies.

“Although we lost that game, it was great experience to get to see so many people in red. And playing in Ireland. I would have loved to win the game but it was a great experience for the team to get from where we were to there.”

Meanwhile South African flanker Chris Cloete, who recently joined Munster on a three-year-deal, is set to make his debut in Friday night’s fixture in Cork.

Twenty six-year-old Cloete has already played for the South African ‘A’ side.

Munster’s starting line-up will also include Simon Zebo omitted from the Ireland squad for the autumn internationals with news he is to leave the province to play in France next season.

Munster will be smarting on the back of their Pro14 defeat to Connacht at the Sportsground on Friday night last.

Limerick man Murray, the only player in the Northern Hemisphere to have scored four tries against the All Blacks in Test matches, was honoured at the gala awards evening, hosted by Gavin Krenski and Rory Sheridan of Guinness, and Chairman of the Rugby Writers of Ireland, Gerry Thornley.

Murray’s award is voted on by Ireland’s rugby media.

Awards were presented to Munster Rugby, Claire Molloy, Cork Constitution and Michael Kearney, and Colin Patterson was inducted into the Guinness Rugby Writers of Ireland Hall of Fame at the event.