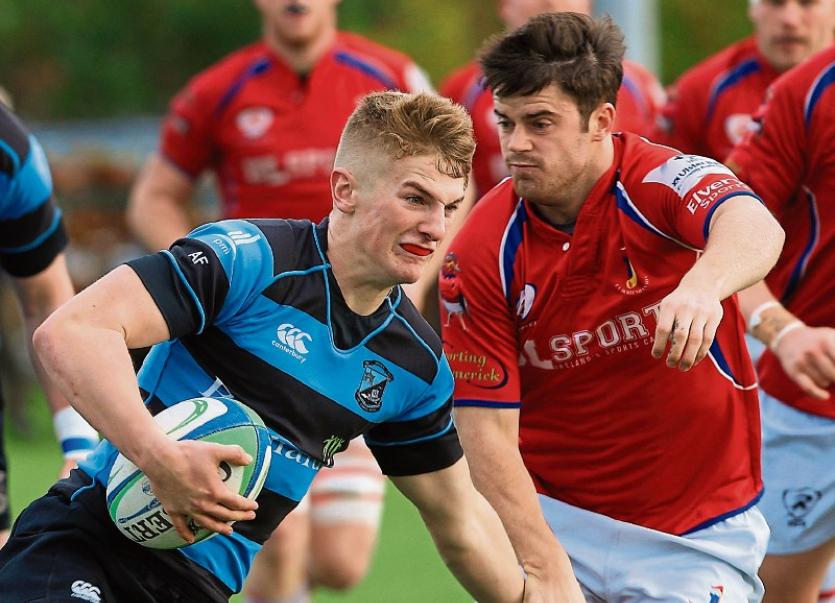 THE Ulster Bank League resumes this Friday night after a three-week break with the Division 1B derby clash of table toppers Shannon and local rivals UL-Bohemian topping the bill of fare in round five.

The meeting of high-flying Shannon and seventh-placed UL-Bohs is sure to attract a significant attendance to Thomond Park on Friday night, 7.30pm.

Tom Hayes’ Shannon side lead the way in 1B on four wins from four with 18 points.

Friday night’s opponents UL-Bohs have won of their four opening AIL fixtures and are 12 points adrift of their Limerick rivals.

Shannon scored a hugely impressive 52-0 win over Dolphin in their last league outing on October 7 when the Parish side racked up eight tries in all. Eathon Moloney bagged a brace, while Jack Stafford, Conor Fitzgerald, Jack O’Donnell, Ciaran Parker, Keith Kavanagh and Darren Gavin also touched down.

UL-Bohs fell to a 34-17 defeat to Ballynahinch in their most recent league outing at Ballymacarn Park when Joe Murray and James Ryan managed tries.

UL-Bohs will however be boosted by their exciting 27-19 Munster Senior Cup quarter-final win over Old Crescent on Thursday last.

Head coach Christy Neilan said: “Division 1B is very competitive, it was the same last season. We are one from four and we were five from six or six from six in the AIL at this time last year.

“Outside of the last game we played against Ballynahinch they were all close enough, could have gone either way.

“It has been a slow enough start, but we are not hitting the panic button yet. If we put in performances like we did against Old Crescent and build on it, we will be ok going back into the AIL.

“Shannon are in the same position now that we were in at this time last year. They are playing well and have recovered from the mishap they had last season.

”We will see how it goes. It’s the second of two local derbies for us after the Old Crescent game in the Munster Senior Cup. It’s a long time since we have had that.”

In Division 1A, both third-placed Garryowen and Young Munster, in eighth, are expected to field strong sides for their respective fixtures as Munster A are not in action this weekend and the Ireland internationals are expected to be available for Munster’s senior side for the PRO14 trip to Galway on Friday night.

Garryowen, who have won two of their four AIL fixtures to date, enjoy a one-point lead over the Dublin students in the table.

Also in Division 1A on Saturday, Young Munster travel to Temple Hill to face Cork Constitution in a crucial Munster derby.

While Munsters’ have managed just one win from their opening four fixtures, champions Con have secured two wins.

Meanwhile, in Division 2B, leaders Old Crescent, boasting four wins from four, face a trip to ninth-placed City of Derry.

In Division 2C, third-placed Bruff host seventh-placed Seapoint at Kilballyowen Park, while fifth-placed Thomond are on the road to Midleton. Bruff scored a convincing win over Tullamore 39-10 last time out, while Thomond lost to Bangor.