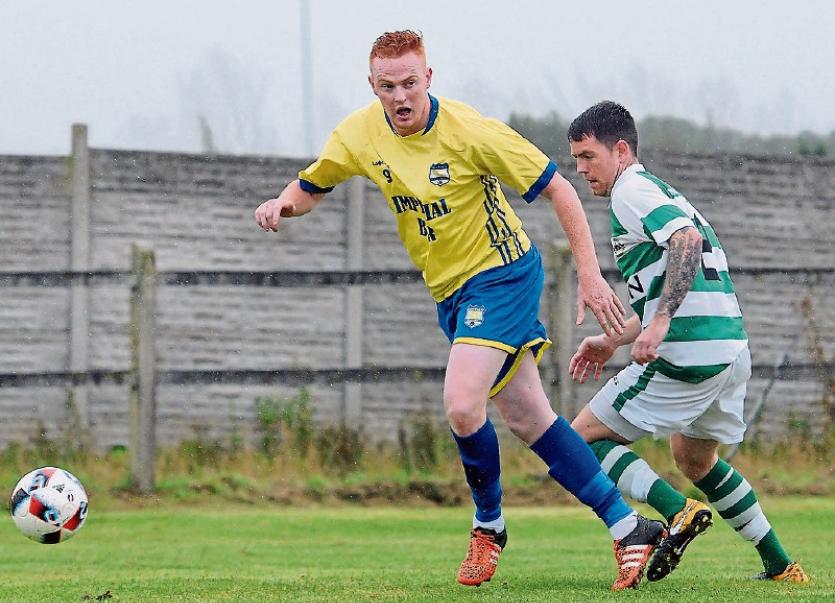 Third time lucky : Kieran Hanlan, Carew Park, in action against Wayne O' Donovan, Pike Rovers when the two side met in the league in August. Carew Park are 2-0 over Pike Rover this season

It's a mixed bag of soccer action this weekend, but there is no doubt top billing goes to the clash between Carew Park and Pike Rvs in the FAI Junior Cup.

In August Carew beat the Hoops 2-1 in the League and a month later the sides met again this time in the Tuohy Cup when Carew registered a 3-1 victory.

Carew Park have not had a game in a couple of weeks but are on a good run of form since their last defeat to Regional Utd. Five wins and a draw have helped to erase that defeat.

The scoring exploits of Kieran Hanlon have been grabbing the headlines but Carew have had many fine performers to date this season. Mark Slattery, Adam Frahill and Pat Boyle have also been winning rave reviews.

Pike have won six of their last seven games, their only defeat was that Tuohy Cup defeat to Carew Park.

Steven McGann and Gary Neville arrive back fresh from their exploits with the Irish International side and will be full of confidence. How they compensate for the loss of Connery remains to be seen however although on their day the likes of Eoin Hanrahan are well capable of finding the net.

This fixture always brings out the best in both sides and expect nothing different on Sunday.

One game in the FAI Under 17 pits Caherdavin Celtic versus Lisnagry in LIT on Sunday afternoon.

There is one game down for decision in the Munster Junior Cup when Kilmallock welcome Premier League champions Janesboro to town.

A mixed week for 'Boro saw them crash out of the Tuohy Cup but progress in the FAI Junior Cup. They have had to mix and match the team over the last few games but managers Aidan Ryan and Shane O'Hanlon will be hoping to be back to full strength for Sunday.

Kilmallock's last outing was a disappointing penalty shootout loss to Nenagh in the Tuohy Cup.

The Co Limerick side played good football on the night but did not show the killer touch when in control, allowing Nenagh to fight back twice.

The sides met earlier in a league game when 'Boro won 4-1. If Clarke and Mawdsley are on form you might expect a similar result his time out.

There are three games down for decision in the PJ Matthews Premier League with interest at both ends of the table.

Ballynanty Rvs take on Regional Utd at a venue not decided at the time of writing.

A victory for Regional would close the gap at the top of the table to two points behind Janesboro while a win for Ballynanty Rvs would propel them into second place, four points behind the leaders.

Balla are on a run of six wins from their last seven game, their only defeat a 2-1 loss to Janesboro in the Munster Junior Cup.

Their last game gave them some revenge for that Munster defeat when they beat 'Boro 3-2 in a dramatic game in the Tuohy Cup.

Regional have been saving their best form for the League in which they are unbeaten after nine games.

After first round defeats in the Tuohy and Munster Junior, Regional bucked the trend in their last game a 2-1 win over Murroe in the FAI Junior Cup.

Midfielder Kieran O'Connell has an impressive eleven goals to his credit so far but goals among the strikers are not as plentiful as Manager Ray Lynch might like.

Janesboro could well end up happiest if this game was to finish level.

Nenagh AFC and Aisling Annacotty are in mid table and a win for either on Sunday will have little impact on the top of the table.

At the other end Sunday could prove a vital day for Holycross. A heavy defeat to fellow strugglers Charleville has left the County side grounded with no points. If they don't get anything from their home game with Moyross they will be seven points from safety with a game extra played.

Moyross have had problems of their own but with a full side they are still a formidable challenge.

In Division 1A Cappamore will move two points behind leaders Prospect if they can account for Murroe, not an easy task however.

Tomorrow (Thursday) it's the turn of the Division 1A O'Halloran Cup at Jackman Park when Summerville Rvs take on Murroe.

Both teams are capable of winning the trophy outright so we can expect a hard fought game.

The winners will meet Aisling for a place in the semi finals of the competition.