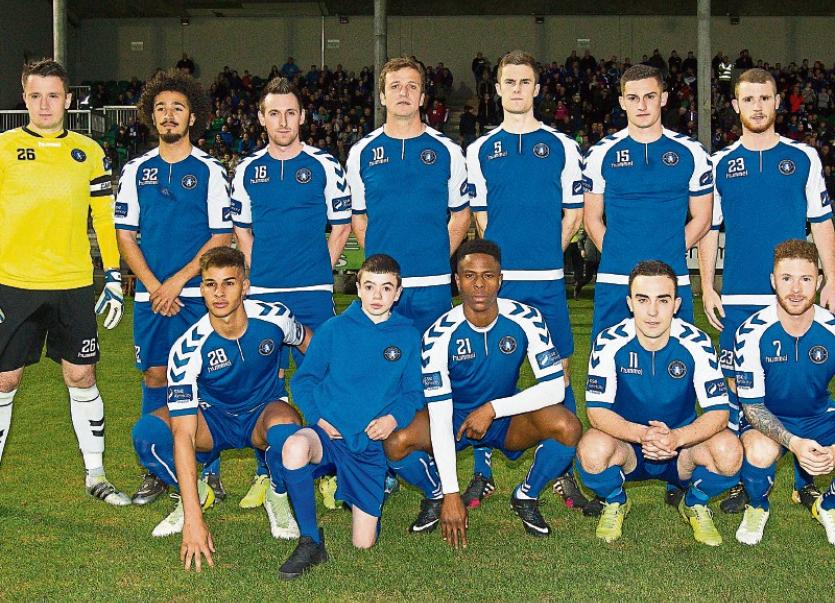 Limerick FC who need one point for safety

LIMERICK FC will secure their Premier Division status in the SSE Airtricity League for next season if the Blues can take a point from Friday night's crucial fixture with Galway United at the Markets Field, 7.45pm.

Limerick moved five points clear of the drop zone with just two games to go, thanks to a hard fought 1-0 victory over already-relegated Drogheda Utd at the Markets Field on Saturday.

Brazilian striker Rodrigo Tosi was the hero for the Blues when netting the winner from the penalty spot in the 48th minute, his 13th league goal of the season.

Limerick will retain their top flight status in the League of Ireland for 2018 on Friday if Neil McDonald’s charges can claim a draw in their penultimate fixture of the season against 10th placed Galway who occupy one of the automatic relegation places.

Rodrigo Tosi said: “We need to work hard this week ahead of the Galway game and make sure we are as concentrated as possible to get the points, at least one point which we need.

”We knew Drogheda would be a tough game because they had nothing to lose. They were bottom of the table and already relegated.

”We were a little bit under pressure going into the game and needed three points, so I think that is why it was important to score as soon as possible. We couldn’t and got a bit nervous.

”But in the end we got the three points which we needed.

“I missed the last penalty I took, but I was comfortable taking it. In training I have been practicing. Even the last penalty that I missed, it was not that bad.  I had to take it to get myself into the game. That is what happened and I’m really happy that I scored the goal.”

Limerick are Tosi’s 14th professional club in 15 years but he has bagged more than 165 league goals on his travels from Brazil to Brunei to Greece, Switzerland, Iran, Singapore, Indonesia and Ireland.

Thirty four-year-old Tosi said he was undecided as to whether he will be playing his football at Limerick in 2018.

”I dunno what to say (about 2018) because I think the club need to be sure that we are staying in the top league before talking to the players.

”I am not sure what is going to happen next year.

”Limerick has been cool, it’s a good life. I like it. I like Ireland as well. The football is a little bit different here with the pace because I was in Asia before.

”It was a slower style of play. I think I adapted well. It was difficult to adapt to the speed of the game at the beginning, but now it is ok. We will see what happens for next year.”