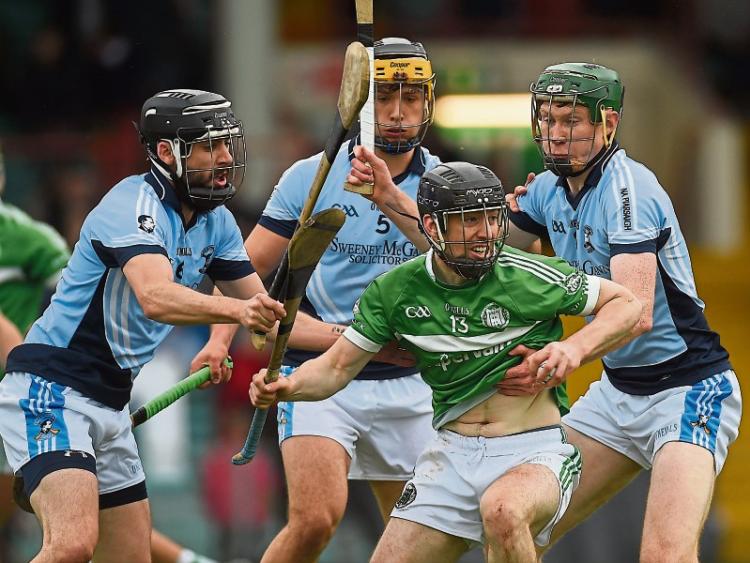 Graeme Mulcahy of Kilmallock is surrounded by Na Piarsaigh defenders

NA Piarsaigh are champions of Limerick senior club hurling once again – for the fourth time in seven years.

The final score in the Credit Union Limerick SHC Final in the Gaelic Grounds this Sunday was Na Piarsaigh 1-22 Kilmallock 2-14.

Jake and Graeme Mulcahy had late Kilmallock goals in this repeat of the 2014 Limerick SHC Final.

Na Piarsaigh led 0-14 to 0-7 at half time. It was an opening 35-minutes when the Caherdavin men hit just one wide, while Kilmallock registered six.

It was 0-8 to 0-6 on 20-minutes but then the city side hit five unanswered points to get on top on the scoreboard.

Kevin Downes opened the scoring in a frantic start but Robbie Hanley hit back.

Then came four points without reply with David Dempsey, Adrian and David Breen on the mark.

Eoin Ryan frees kept Kilmallock in touch and then Graeme Mulcahy hit two points and it was 0-6 to 0-5 with 13-minutes played.

Downes and David Dempsey added points and the lead was seven points approaching half time.

Kevin O’Donnell replied for the men in green but a third of the half for Adrian Breen left it 0-14 to 0-7.

Ronan Lynch, Kevin Downes and Man of the Match Adrian Breen added to the lead on the change of ends.

The Na Piarsaigh goal came in the 47th minute – a top finish from David Dempsey.

When Peter Casey and Breen added points the lead was 1-21 to 0-11 with less than 10-minutes to play.

Credit Kilmallock they hit five of the last six scores but there was no denying Na Piarsaigh.