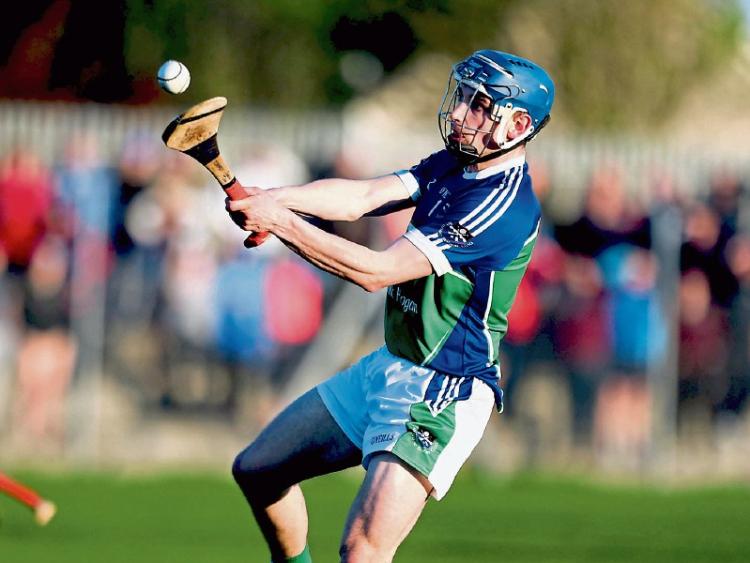 Pat Tobin in action for Murroe/Boher

A COLIN Ryan goal from a 21-metre free in the fifth minute of injury time ensured a dramatic replay in the final of the LIT Limerick Premier IHC this Sunday in the Gaelic Grounds.

As the Limerick champions are due in Ennis to play Clare winners Kilmaley next weekend in the Munster club IHC, the county final replay will take place in the Gaelic Grounds on Wednesday evening.

At half time it was Murroe-Boher 0-13 Garryspillane 1-4 after the east Limerick side had played with the aid of a slight breeze.

It was a half in which the sides shared six wides.

Garryspillane scored no point from play in the half and their goal came inside four minutes from Donie Ryan. Ryan accounted for their entire first half tally with four frees added to the goal, which was the first score of the day.

That was it from the men in black and amber and Murroe-Boher hit with nine successive points from the 14th minute to the half time whistle.

Seanie Tobin ended the half with four points from play, while Aaron Kennedy and Cillian Byrnes had two each.

Garryspillane then lost James Ryan to injury at half time but made immediate in-roads with John Kerins, Colin Ryan and Micheal O’Donnell points on the resumption.

But Murroe-Boher had Tobin and Dylan O’Connor points and were 0-17 to 1-10 clear entering the final quarter.

Then in the game’s 47th minute, Colin Ryan goaled from a penalty, won by his uncle Donie Ryan.

But Murroe-Boher appeared to have steadied with Jack Casey, Seanie Tobin and Seamus Hickey points.

Eoin Sheehan and a Tobin free exchanged points in the early part of injury and with a goal lead Murroe-Boher looked on course for an immediate return to the senior ranks.

Then in the fourth minute of injury time Garryspillane won a free 40-metres from goal. Instead of dropping into a crowded goalmouth, Colin Ryan worked it short with Danny Hayes and Ryan was then fouled for a 21-metre free.

He stood over the free and crashed low to the net for a dramatic equaliser.